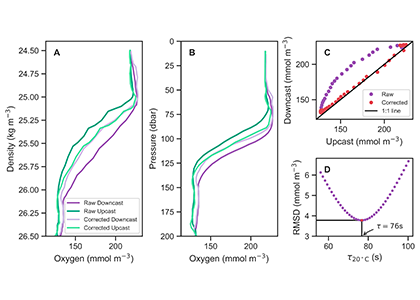 Despite its fundamental importance to the global carbon cycle, climate, and marine ecosystems, oceanic primary production is grossly under-sampled. Autonomous platforms represent an important frontier for expanding measurements of marine primary productivity in time and space, but this requires the establishment of robust, standardized methods to obtain reliable data from these platforms. Using data from profiling floats deployed in the northern Gulf of Mexico, authors of a recent study published in Biogeosciences demonstrated, for the first time, that daily cycles of dissolved oxygen can be observed with Argo-type profiling floats. The floats were instructed to profile continuously, resulting in about one profile every three hours. The floats recorded data both on the ascent (upcast) and the descent (downcast). Adjacent casts showed hysteresis in gradient areas, i.e. a lag in the concentration measurement, due to the slow response time of oxygen sensors. 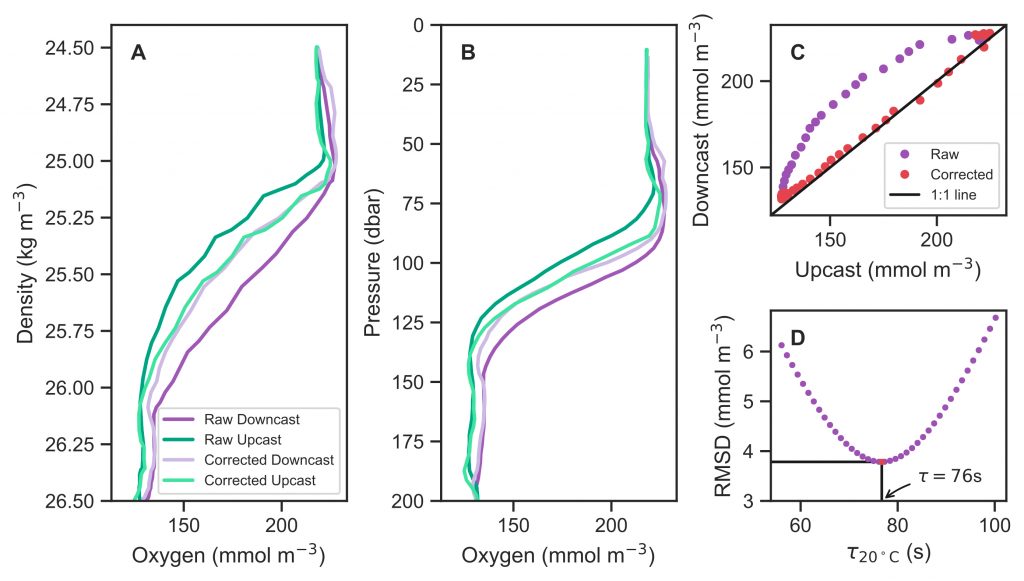 Figure 1: Example of raw oxygen measurements from a downcast (dark purple line) and an upcast (dark green line) and corrected profiles (lighter purple and green lines) in (a) density and (b) pressure coordinates. (c) Upcasts and downcasts (top 150 m) plotted against each other with raw data (purple) and data corrected according to the new method (red). (d) The root-mean-square difference (RMSD) between the upcast and downcast after correcting casts for a range of time constants (τ), showing an optimal τ value in this case of 76 s (red dot).

To correct for these measurement errors, the authors developed a method to determine sensor response time in situ, using an established process for correcting sensor response time errors. This method requires a timestamp associated with each observation. The response time parameter (τ) was determined by correcting consecutive profiles taken in opposite directions using a range of possible values and finding the minimum root-mean-square-difference between them (Figure 1). In light of these findings, future oxygen measurements from Argo floats should be transmitted with time stamps for a calibration period during which up- and downcasts are recorded to facilitate response time correction. The method developed here will contribute to more accurate measurement of dissolved oxygen, thus improving the quality of derived quantities such as primary productivity.