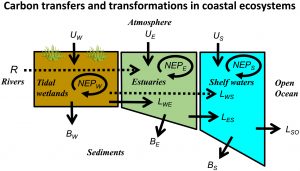 Coastal and inland waters not only cycle and store large amounts of carbon, but they transcend the time and space scales at which scientists are working in open ocean vs. terrestrial communities, so collaborative efforts across these communities are essential to develop observing and predictive capacity, quantify fluxes, and improve mechanistic understanding.

A 2016 science plan published by members of both communities provided a synthesis of carbon fluxes in key regions of North America and highlighted research and observational gaps for future study. Members of these communities have since come together again to contribute to the 2nd State of the Carbon Cycle Report (SOCCR-2). These two documents, as well as the earlier published 2011 U.S. Carbon Cycle Science Plan and soon to be completed NACP Science Implementation Plan, will serve as important guideposts for future carbon cycle science research, and this group's efforts will build upon recommendations and priorities put forth in these community-vetted documents. 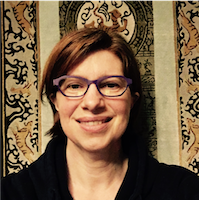 Simone Alin is a Supervisory Oceanographer at NOAA's Pacific Marine Environmental Laboratory in Seattle and an Affiliate Associate Professor in the University of Washington School of Oceanography.  Her research focuses on ocean acidification and other carbon cycle issues in coastal waters on the U.S. West Coast and in Puget Sound.  In 2016, she led the planning and execution of the fifth NOAA West Coast Ocean Acidification research cruise, which extended from Baja California to British Columbia.  When on land, Simone is actively involved with planning and implementing observing networks for the global carbon cycle, as well as leadership committees for national and international data synthesis.  She has served in science leadership roles, including organizing numerous national science meetings, with the North American Carbon Program (NACP) Science Leadership Group, the Ocean Carbon and Biogeochemistry (OCB) Program Science Steering Committee, the OCB Ocean Acidification Committee, and the NACP-OCB Science Focus Group.  She is the global Coastal Oceans leader on the international Surface Ocean CO2 Atlas (SOCAT) project, and she was an alternate member on the Washington State Governor’s Blue-Ribbon Panel on Ocean Acidification in 2012.  Dr. Alin also enjoys helping the public and policy makers connect the dots about effects of human-caused CO2 emissions on ecosystems and society through novel graphics and narratives focused on ocean carbon and ecosystem issues through collaborations with a variety of partners. 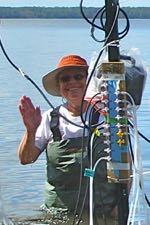 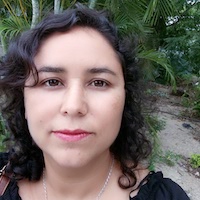 Cecilia Chapa-Balcorta is an Associate Professor at Universidad del Mar, Oaxaca, Mexico.  She holds a bachelor degree in Oceanology (Universidad Autónoma de Baja California, México), an MSc in Environmental and Marine Science (University of Auckland, NZ) and PhD in Coastal Oceanography (Universidad Autónoma de Baja California). Her research focus on the Spatial-temporal variability of the marine CO2 system, ocean acidification and ocean-atmosphere carbon fluxes in tropical ecosystems as well how these are modulated by physical processes. Her work ranges from water sampling and moored sensors to the use of satellite data to understand the dominating conditions that modify the CO2 system such as eddies, upwelling events, among others.  She is currently responsible of the research project “Permanent Program of ocean acidification monitoring and its effects on reef forming corals in México”  financed by the Mexican Science and technology Council (CONACyT). She is member of the Global Ocean Acidification Network, the “Mexican Carbon Program” and the “Ocean, Climate and Global Change” CONACyT Networks. She has collaborated on the generation of synthesis products related to the marine dissolved inorganic carbon for the Mexican Carbon Program.
ResearchGate 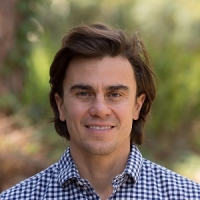 Kyle Cavanaugh is an Assistant Professor in the Department of Geography at University of California, Los Angeles and associate investigator in the Santa Barbara Coastal Long Term Ecological Research Program. He received his PhD in Marine Science from the University of California Santa Barbara in 2011 and then completed a postdoc at the Smithsonian Institution. His research involves using long-term data to study the drivers and consequences of changes in coastal foundation species such as giant kelp forests and mangroves.
Website 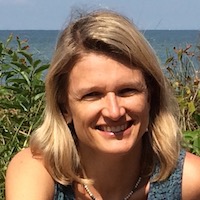 Marjorie Friedrichs is a research associate professor at the Virginia Institute of Marine Science of the College of William & Mary. She received a BA in Physics from Middlebury College, a MS in Physical Oceanography from the Massachusetts Institute of Technology/Woods Hole Oceanographic Institution Joint Program, and a Ph.D. in Oceanography from Old Dominion University. Her interdisciplinary research interests focus on how physical processes affect biogeochemical properties in estuarine and coastal systems. She uses coupled hydrodynamic-biogeochemical models together with analyses of in-situ and satellite data to better understand how and why carbon and nitrogen cycling varies among diverse marine environments. Much of her current research investigates how human impacts, such as changes in global climate, atmospheric deposition, urbanization and land use affect carbon, biogeochemical and ecosystem dynamics in these systems. Friedrichs’ current modeling projects involve forecasting hypoxia and acidification in the Chesapeake Bay (www.vims.edu/hypoxia). Another focus of her research involves the assessment of the relative skill of multiple models currently being used by the scientific community and techniques for optimally combining data and models including data assimilation and parameter optimization.
Website 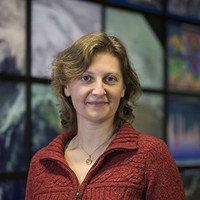 Maria Herrmann is an Assistant Research Professor at the Department of Meteorology and Atmospheric Science at the Pennsylvania State University.  She specializes in marine biogeochemistry – an interdisciplinary study of the chemical, physical, geological, and biological processes that determine the chemistry of the ocean. She received a PhD in Meteorology from the Pennsylvania State University in 2010. Her research focuses on cycling of carbon, oxygen, and other elements in coastal waters and the anthropogenic effects on coastal biogeochemistry.
Website 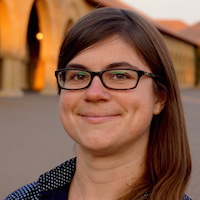 Sara Knox is an assistant professor in the Department of Geography at the University of British Columbia. She received a B.Sc. in Earth System Science from McGill University, a M.Sc. in Geography from Carleton University, and a Ph.D. in Environmental Science, Policy, and Management from the University of California, Berkeley. She studies the exchange of energy, water and greenhouse gases between the land surface and the atmosphere, and the effects of natural and human-induced disturbances on this type of ecosystem function. Her research combines methods from atmospheric science, hydrology, and ecology to further our understanding of carbon cycling and water & energy exchange within agricultural and wetland ecosystems.
Website

John Kominoski is an Associate Professor in the Department of Biological Sciences at Florida International University and co-PI of the Florida Coastal Everglades Long Term Ecological Research Program. He is an ecosystem ecologist whose research integrates spatial and temporal scales of biogeochemical cycling and organic matter processing. His research focuses on the interface (ecotone) between ecosystems where community transitions and exchanges of materials occur. Dr. Kominoski uses theory to test fundamental questions in ecology, enabling him to study ecosystems ranging from the mountains to the sea.
Website 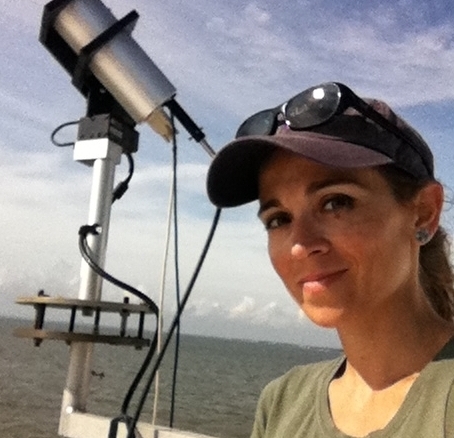 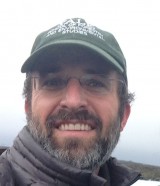 Peter Raymond’s research focuses on biogeochemistry of natural systems. In particular, the carbon and nitrogen cycles within aquatic systems. His current research topics include the landscape controls on the watershed export of carbon, biogeochemical transformations in estuaries, the physics of air-sea CO2 exchange, nitrogen cycling in temperate watersheds, and determining the age and composition of carbon being transported from land to the ocean. Raymond's research often utilizes the watershed approach and natural isotopes to determine major sources, sinks, and ages of various carbon and nitrogen pools in the natural environment. He completed his PhD at the Virginia Institute of Marine Sciences, and prior to joining the School of Forestry & Environmental Studies and Department of Geology & Geophysics at Yale he was a visiting scientist at the Smithsonian Tropical Research Institute, a postdoc at the Woods Hole Oceanographic Institution and Marine Biological Laboratory, and a Tibor T Polgar Fellow at the Institute of Ecosystem Studies.
Website