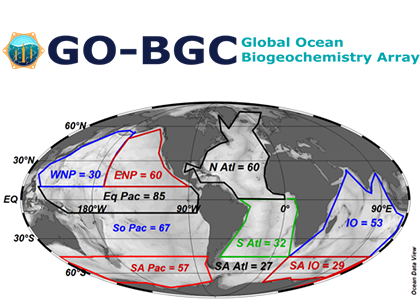 An extension of the Argo network for temperature and salinity, GO-BGC floats will be equipped with nitrate, oxygen, pH, backscatter, chlorophyll fluorescence, and, when possible, irradiance sensors and will be distributed globally in open ocean waters deeper than 2,000 m. Floats will “park” at 1,000 m depth for nine days before profiling from 2,000 m to the sea surface, which is consistent with the Argo protocol. Data will be posted to the Argo Data Assembly Centers, as well as the GO-BGC website, within 24 hours of satellite telemetry of each float profile. These real-time data will be of research quality and freely available. As many floats as possible will be deployed in conjunction with ship-based validation measurements in order to support continuing improvements in data processing and sensor performance, as well as to quantify the accuracy of the float data.

The 500 floats in GO-BGC will represent half the desired global number of 1,000 floats proposed in the Biogeochemical Argo Science and Implementation Plan (BAPG, 2016) for a global BGC observing system. As occurs in the Core-Argo program, we anticipate that an additional 500 floats will be deployed by international partners in the coming years, and many efforts are already underway.

The NSF MSRI grant focuses solely on the implementation of GO-BGC infrastructure and does not include funding for research. Successful use of the array will depend on community engagement via proposal pressure to conduct research. We, therefore, strongly encourage community members to begin planning to submit proposals to utilize profiling float data. As the GO-BGC project is just beginning, no floats have reached the water yet. However, there is a quality controlled set of data from the Southern Ocean Carbon and Climate Observations and Modeling (SOCCOM) project, as well as a variety of other Biogeochemical-Argo data sets that are available now.  These data sets have been used in numerous studies and they are available to the community as an initial asset and as a guide for future planning.

The GO-BGC array will be implemented in phases. Critical logistical partnerships in this endeavor include those with regional field programs and the International Global Ocean Ship-Based Hydrographic Investigation Program (GO-SHIP), from which many of the floats will be deployed. While research cruises have been impacted significantly by the recent 2020 COVID-19 pandemic, planning is still underway and information about where GO-BGC floats are likely to be deployed in the coming years will be critical in guiding research proposal efforts (Figure 2). 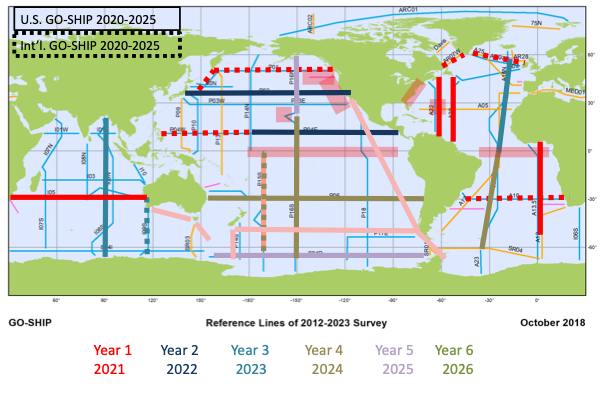 Figure 2. Known deployment opportunities from GO-SHIP cruises in the next five years (US GO-SHIP solid; international GO-SHIP dashed). Pink lines show additional Year 1 opportunities from cruises outside of GO-SHIP, some of which occur annually.

We will disseminate more information and answer questions from the community about the project and implementation plans during a virtual Town Hall at the AGU Fall Meeting in December, 2020.