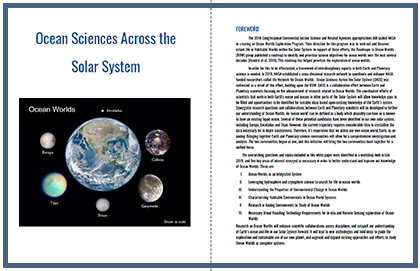 SUMMARY
The discovery that there are major oceans beyond Earth is exciting for Earth oceanographers and planetary scientists alike. As life on Earth began in the ocean, these other worlds offer tantalizing possibilities of finding life beyond our own planet. They also offer the possibility of learning about conditions, including physical and chemical processes, that may be different from Earth, and that affect the ocean’s surfaces and interiors and regulate how those systems function. The innate connection that exists between Earth’s ocean and ocean worlds beyond Earth offers many possibilities, and demands the action, of strong research collaborations between Earth ocean scientists and extraterrestrial ocean scientists. This white paper summarizes six areas of priority where the study of Oceans Across the Solar System would benefit from a close collaboration between Earth and  extraterrestrial oceanographers.

Ocean world research requires the study and understanding of Earth’s ocean. The different sections herein outline some of the priority areas for ocean research across the solar system, identify existing gaps, and provide ideas for developing testable ideas based on the Earth System. It is important to acknowledge that there are no perfect analogs; however, the different sections highlight the strengths and weaknesses of using analogs for different types of research, such as improved understanding of ocean world processes, habitability, and where to search for life beyond Earth. For example, by identifying analogs for specific processes, rather than specific conditions, it may be possible to develop a mechanistic understanding that enables an extrapolation beyond Earthly points of reference. Observation and hypothesis testing in Terrestrial environments that most closely approximate the physical and chemical conditions thought to exist in ice covered oceans can refine our understanding of those in ice-covered oceans and within the ice, though the numerous differences between Earth and other ocean worlds will significantly impact the nature, abundance, and quality of evidence for any life that may exist, relative to what we observe on Earth. On Earth, life and biogenic materials are heterogeneously distributed according to the availability of resources, strength of stressors, and various physical transport processes; understanding the balance of factors that underlie such heterogeneity, and projecting that understanding into the context of environments beyond Earth, can maximize the potential of detecting biosignatures.

As the search for life in ocean worlds continues, technologies to detect such signatures will be critical, as will our understanding of the potential distribution of life in icy worlds. Large-scale synoptic views of ocean worlds can be afforded by active and passive remote sensing methods. Imaging spectrometers, spanning ultraviolet to infrared wavelengths, can assess the composition of inorganic and organic matter in the water or within snow and ice on the surface of an icy body. Active remote sensing technologies, such as radar and lidar, can measure backscattered light off of ocean particles, subsurface observation of ice, and provide information on the surface of worlds that have thick or obscuring atmospheres. In situ technologies for ocean worlds span systems and instruments that operate above, on, under, or within ice, slush, and fluids. These include technologies to determine biological, chemical, and physical properties, including biosignature detection methods.

There is much to be gained between a close collaboration between Earth and extraterrestrial ocean scientists for the study of Oceans Across the Solar System. The knowledge, tools, and different perspectives of the same discipline, applied across our solar system, provide complementary knowledge that will serve to advance the understanding of ocean world workings; this is critical for understanding Earth’s oceans past and it’s possible future under climate change scenarios, and how life began on our planet. This will in turn further the search for life elsewhere and help us understand habitability beyond our Blue Marble.

Lastly, with the advent of space exploration, the protection of Earth’s environment and other solar system bodies from harmful contamination have become an important principle of high priority. Consequently, the exploration of ocean worlds thought to be capable of harboring life (extinct or extant), or processes relevant to prebiotic chemistry, are of relevance to planetary protection initiatives. Both Earth and Planetary science communities, working together, can significantly contribute to the development of policies, procedures, and techniques to meet planetary protection
requirements. 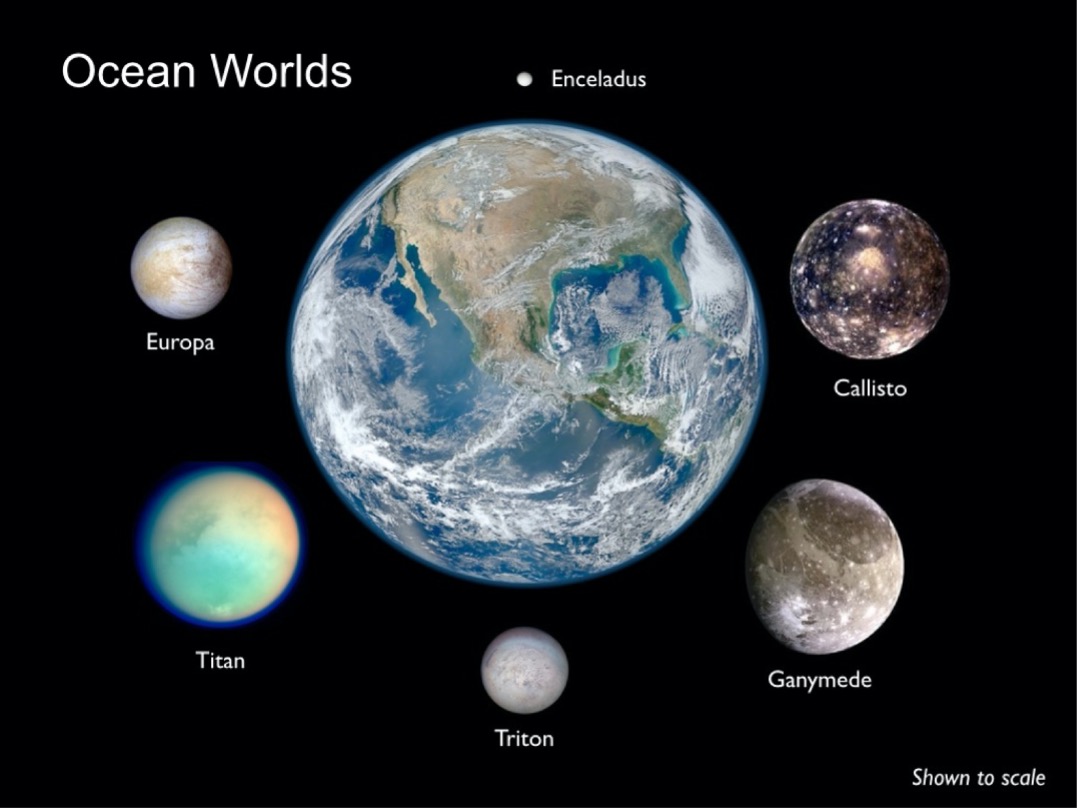 Fig.1 Ocean Worlds of the Solar System shown to scale. Jupiter’s moons Europa, Callisto and Ganymede have all been confirmed to host large-volume salt-water oceans as have Saturn’s moons Enceladus and Titan: all beneath thick ice-shells. Further out in the solar system, other candidate ocean worlds await further investigation, including Neptune’s moon Triton. Image credit: K.P.Hand, NASA-JPL. 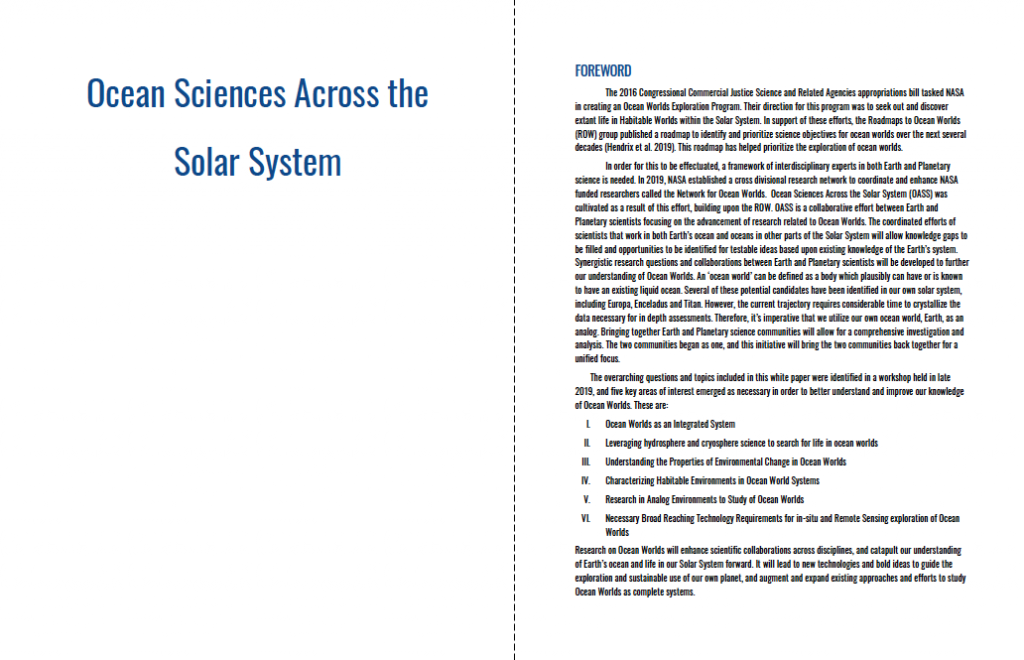