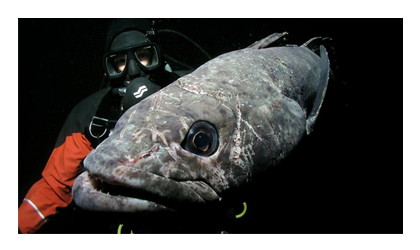 Research and monitoring in the Ross Sea Marine Protected Area Figure 1. Areas designated as part of the Ross Sea Marine Protected Area. KRZ is a krill research zone, and SRZ indicates the location of a special research zone. Areas i, ii, and iii are designated as no-take areas intended to protect the continental shelf, the shelf break, and sea mounts that are thought to be important within the life cycle of Antarctic toothfish. Red box within insert shows the location of the MPA region.

The RSMPA is the largest marine protected area in the world, and is often substantially ice-covered throughout much of the year. Despite the harsh habitat, it is home to the Antarctic toothfish (Dissostichus mawsoni; Fig. 2), a species that is currently being commercially exploited (cost at present is ca. 30 USD per kilogram wholesale, placing it as the most expensive fish in the ocean). Due to its value, illegal catch is of great concern; however, due to recent efforts to monitor and prosecute illegal catches, current illegal catch is relatively small (<10% of the legal catch in the Southern Ocean as a whole). Concerns about the impacts of industrial fishing on the health and stability of large areas both within and outside the MPA have arisen, given its substantial seasonal movement, uncertainties about its life cycle and its role within food webs and biogeochemical cycles. Discussions were held on the means by which ecosystem structure and function can be preserved in the face of this fishing pressure, because CCAMLR is tasked with not only monitoring the exploitation of resources, but ensuring that the structure and function of ecosystems in the Southern Ocean are preserved. Figure 2. Antarctic toothfish and diver (Credit: Rob Robbins, U.S. Antarctic Program). Adult toothfish are neutrally buoyant and are caught from 300 to 2,200 m. Despite its size, toothfish eggs and larvae have never been collected, and its life history is uncertain. Adults can be over 1.3 m in length and weigh over 160 kg (350 lbs.). Toothfish likely spawn off the continental slope north of the Ross Sea, travel within the Ross Gyre, and return to the shelf to feed as juveniles, eventually migrating off shelf again. Toothfish are largely piscivorous and feed on Antarctic silverfish (Pleurogramma antarcticum). Note the many scars in the picture, which likely are the result of encounters with seals, a known predator of toothfish.

Various proposals by different nations were provided, but two – one jointly introduced by Italy and New Zealand, and one introduced by the Antarctic and Southern Ocean Coalition (ASOC) – were discussed in detail, and the delegates spent a good deal of time merging the two and preserving the strengths of both. The ASOC recommendation suggested a) assessments of the representativeness of the protected regions, b) assessments of the extent to which threats to the achievement of the specific MPA objectives are being mitigated by the MPA, and c) provision for research and monitoring to examine marine systems to understand the role of fishing, environmental variability and climate change. It further suggested that research address the ecosystem resilience to the external disturbance and the potential for creating a degraded and alternate steady state for the system. The New Zealand-Italy proposal was based on previous bioregionalization delineations that included various areas of the shelf, slope and open water zones, including benthic and pelagic systems (Sharp et al., 2010; Mormede et al. 2017). Also included in this proposal were guidelines for any future krill fishery that might develop (none exists at present, but CCAMLR is mandated to manage this fishery). A conveners report from the workshop will be disseminated for comment.