The 2017 OCB Summer Science Workshop was held June 26-29, 2017 at the Woods Hole Oceanographic Institution in Woods Hole, Massachusetts. View the Twitter activity for this meeting at #OCB2017!

View the online poster gallery from the workshop. Coastal wetlands, photo by the U.S. Fish and Wildlife Service

Coastal wetlands (e.g., salt marshes, mangroves, tidal freshwater wetlands, and sea grass beds) exhibit high rates of carbon assimilation, storage and fluxes. These ecosystems provide a wide range of services, including carbon sequestration, coastal protection, habitat provision and nutrient and sediment regulation. Recent studies demonstrate that coastal wetlands play important roles in global and regional carbon cycles and exert significant influences on the biogeochemistry of the coastal ocean. Large uncertainties remain, however, about coastal wetland carbon biogeochemistry and fluxes due to their highly heterogeneous and dynamic nature, as well as their susceptibility to human pressures and climate change. This session will highlight new state-of-the-art observational, analytical, modeling, and large-scale assessment approaches being used to quantify and constrain carbon fluxes in coastal wetland systems, including exchange fluxes at critical boundaries such as air-water, sediment-water, and wetland-ocean interfaces.

This session kicked off with presentations by invited speakers Ray Najjar (Penn State) and Lisamarie Windham-Myers (USGS). The remainder of the session included a combination of lightning presentations by OCB workshop participants and open group discussion on the topics of internal cycling, lateral fluxes and exchanges, vertical fluxes and exchanges, and regional-scale modeling efforts. 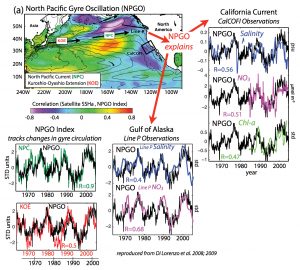 Projected anthropogenic climate change over the coming century is likely to impact marine ecosystems and biogeochemical cycles in marked and various ways. In addition to this anticipated change, natural modes of climate variability have been found in the past to influence marine ecosystems and biogeochemical cycles on human-relevant timescales. In some cases, the magnitude of natural perturbations and potential consequences may exceed the anticipated effects from climate warming over the coming century. Speakers in this session will examine the ecological and biogeochemical consequences of natural modes of climate variability, including El Niño-Southern Oscillation, the Pacific Decadal Oscillation, the North Atlantic Oscillation, and others. Invited talks will discuss links between climate variability and changes in a broad range of organisms and trophic levels, from plankton to top-level predators, and connect these ecological changes to biogeochemical variability. 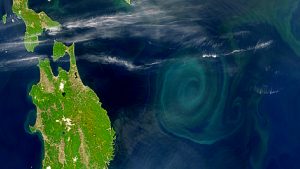 An eddy off Japan in Kuroshio-Oyashio Extension region, photo by NASA.

This session will address mesoscale and submesoscale dynamics and the physical-biological-biogeochemical interactions that occur over the associated space and time scales. Speakers will present research on the role of physical circulation features in the distributions of chemical constituents and organisms in coastal and open ocean regions. Both observational and modeling perspectives will be included in the discussion of how physical processes influence the transport of material and the biological pump. 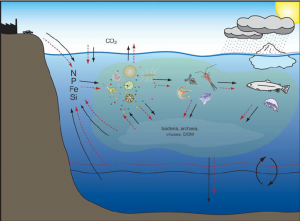 Ecological stoichiometry considers how the balance of C,N,P, and other chemical elements affects, and is affected by, organisms and their interactions.  The majority of research on this subject in marine ecosystems has focused on primary producers;  in this session we highlight the role of consumers in carbon and nutrient cycling.  The affects of food quality or diet (e.g., mixotrophy) on elemental balance, the importance of stoichiometry for the biological pump,  and effects on fisheries production will be addressed using examples from both marine and freshwater ecosystems. 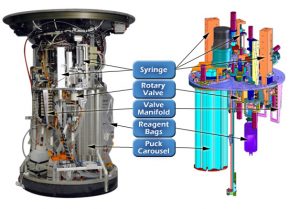 Ocean robots such as autonomous underwater vehicles (AUVs) and remotely operated vehicles (ROVs) have been a game changer for 21st century oceanography, greatly expanding our capacity in space and time to measure and explore the ocean. This session will highlight existing and visionary technologies that hold great promise for advancing OCB science, including in situ manipulation and exploration of the mesopelagic, remote molecular probes to detect microorganisms in real-time, autonomous robotic networks to quantify biogeochemical fluxes and other key ecosystem parameters, and underwater imaging technology to assess particle size spectra.

2. Agenda with Talks and Webcast Footage