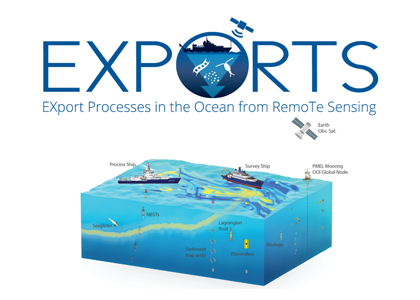 Updates and Plans for the First EXPORTS Field Campaign

EXPORTS in a Nutshell

Ocean ecosystems constitute a significant fraction of the world’s primary production, fixing CO2 and creating oxygen while playing critical roles in sequestering CO2 from the atmosphere. An improved understanding of the cycling and fate of oceanic organic carbon will not only allow for better prediction of how these processes may change in the future, but it will help underpin the societal value of these ocean ecosystem services. The EXport Processes in the Ocean from RemoTe Sensing (EXPORTS) field campaign aims to provide answers to these questions.

The goal of EXPORTS is to develop a predictive understanding of the export and fate of global ocean net primary production (NPP) and its implications for the Earth’s carbon cycle in present and future climates (oceanexports.org). To develop this quantitative understanding, EXPORTS will measure and model the export pathways that remove fixed organic carbon from the upper ocean and drive the attenuation of these vertical fluxes within the ocean interior. EXPORTS datasets will be used to develop and test numerical predictive and satellite-data diagnostic models of NPP fates and their carbon cycle impacts. EXPORTS builds on decades of NASA-funded research on developing and validating satellite data-driven models of regional to global NPP and hence, EXPORTS will contribute to NASA’s upcoming Plankton, Aerosol, Cloud and ocean Ecosystem (PACE) mission.

A Brief History of EXPORTS

The NASA EXPORTS field campaign is the result of an initial open competition in 2012 by the NASA Ocean Biology and Biogeochemistry (OBB) Program to identify scoping workshops for future field campaigns. This was followed by many years of committee-based planning, community vetting of science and implementation plans, and final peer review.  The NASA EXPORTS Science and Implementation Plans were made publicly available by the NASA OBB program. In February 2016, the National Science Foundation held the Biology of the Biological Pump (BoBP) workshop aimed in part to leverage NASA’s planned investment in the EXPORTS field program. In August 2016, NASA announced it would support data mining and observational system simulation experiment (OSSE) projects to help with planning the NASA EXPORTS field campaign and five projects were funded under this pre-EXPORTS call.

In early 2017, NASA released a call for proposals for the EXPORTS field program and the competition for inclusion on the NASA EXPORTS Science Team and its leadership. The call also included the implementation approach for the EXPORTS field program, with two major cruises to collect in situ data, followed by a synthesis and analysis phase to be competed in the future. At the same time, NSF released a Dear Colleague Letter (DCL) stating they would consider proposals that leveraged the NASA investment with objectives that supported the BoBP plan. From the NASA competition, 11 projects were selected for support (Table 1). Three NSF proposals have been recommended for support (at the time of this writing, the awarding of these grants is not yet official), bringing the count to a total of 41 PIs and co-PIs that are supported by NASA and NSF on EXPORTS/BoBP. This level of investment likely makes EXPORTS the largest coordinated U.S.-funded biogeochemical field program since the Joint Global Ocean Flux Study (JGOFS) nearly 2 decades ago. Table 1 lists the funded projects, PI, and co-PIs, project titles, and links to two page descriptions for each project.

Any implementation of the EXPORTS field program must result in the quantification of the major export pathways that remove fixed organic carbon from the upper ocean and sequester it at depth. NASA is uniquely poised, given the global vantage point of space-based observations, to use Earth observing satellite data to meet this objective, while also understanding observational requirements for future advanced Earth Observing missions.  Quantification of major carbon export pathways requires the simultaneous measurement of 1) sinking particle fluxes (and their composition), 2) the export of organic carbon to depth via vertically migrating zooplankton, and 3) the vertical transport of dissolved and suspended particulate organic carbon to depth, where it is remineralized by different microbial communities. To develop predictive links to satellite ocean color-retrievable parameters, the quantification of export pathways must be augmented by research programs focused on, but not limited to, the elucidation of plankton community structure, rates of NPP and grazing, and optical oceanography. Complicating this further is the stochastic nature of export flux determinations that necessitates a fully four-dimensional sampling design while maintaining a long-term perspective. This reasoning led to the Agency selection of projects listed in Table 1.

The planning of the EXPORTS field campaign is well underway. The first field deployment is planned to take place in the summer of 2018 in the Northeast Pacific, while the tentative second cruise will be in the North Atlantic Ocean in the spring of 2020. NASA has formed a project office staffed of Agency and EXPORTS PIs to direct EXPORTS’ progress. The EXPORTS Science Team, which comprises the funded PIs, is participating on near-weekly teleconferences, and co-chief scientists have been selected. An initial EXPORTS kickoff meeting was held in September 2017 in the Washington, DC area. There, the PIs organized themselves into working groups focused on creating short methodological descriptions for each measurement to be made. This documentation will be critical for the metadata, the project data management, and for ensuring legacy of the program through a set of NASA Technical Memoranda. This has also proven to be an excellent way to foster cross-project collaborations. A second PI meeting is scheduled for mid-February 2018, leveraging the upcoming Ocean Sciences Meeting.

The first EXPORTS field deployment will be to the Northeast Pacific Ocean in late summer 2018. Two ships, the R/V Roger Revelle and the R/V Sally Ride, will be deployed for 27 days of coordinated sampling around Station P (50°N 145°W), while EXPORTS’ autonomous component will ensure a longer-term presence. The choice of Station P as an anchor point for the field campaign was made based on results from the data mining and OSSE projects and the availability of a long-term data set for this site, as well as the many sampling partnerships afforded by ongoing programs. Canada’s Line P long-term hydrographic/biogeochemistry program has been running since 1949, and they currently conduct three annual transect cruises from British Columbia to Station P. Other useful partnerships include NOAA Pacific Marine Environmental Laboratory’s (PMEL) air-sea interaction buoy and the NSF’s Ocean Observatories Initiative’s (OOI) global node at Station P. 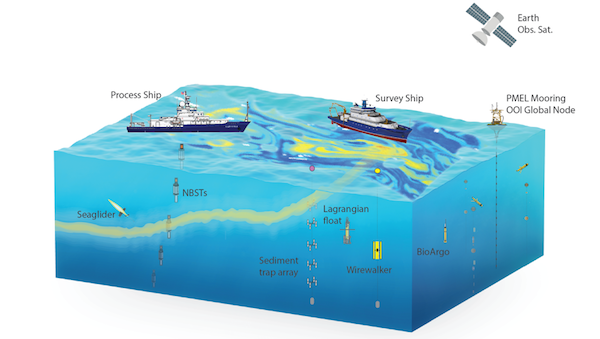 Figure 1: Cartoon depicting many of the individual elements to be deployed during the 2018 EXPORTS sampling program in the North Pacific.

The EXPORTS 2018 field deployment will comprise four basic components (depicted in Figure 1 above). First, several autonomous vehicles will be deployed before the ship observations. An instrumented Lagrangian float will be deployed at depth and used to set the spatial center of the sampling program, while an instrumented Seaglider will be used to provide vertical and some horizontal spatial information around the Lagrangian float’s drift. In addition, and if approved by the OOI Facility Board, instrumented gliders deployed at the Station P OOI global node will be used to supplement the autonomous vehicle data streams.

Third, the R/V Sally Ride will be the Survey Ship making spatial patterns about the Process Ship on scales from roughly 1 km to nearly 100 km. The focus of the Survey Ship will be collecting horizontal spatial information on particle export (234Th disequilibrium), net community production (O2/Ar), organic carbon stocks, phytoplankton composition, and inherent and apparent optical properties. The Survey Ship will also deploy a suite of instrumentation to characterize the particle size spectrum from 20 nm to nearly a cm. It will also be responsible for validating the calibration of the autonomous vehicles’ bio-optical instrumentation and the development of the biogeochemical proxies. Norm Nelson (UCSB) and Mary Jane Perry (self-affiliated) have agreed to be the co-chief scientists on the R/V Sally Ride.

Last, EXPORTS needs a long-term sampling presence to tie the ship-based observations to climatically relevant time and space scales. The Lagrangian float and Seaglider will sample for ~6 months, bracketing EXPORTS’ intensive ship observations, and thus providing some long-term perspectives to the ship sampling. Partnering programs like Line P and the OOI Global Node will allow for some additional in situ sampling opportunities and broader temporal context. Further, the PMEL mooring and a profiling float project recommended for funding by NSF will extend the long-term biogeochemical observations.

The integration of the observations will generate a data set that will not only be invaluable for building new algorithms for retrievals of new and refined data products from NASA’s current fleet of Earth Observing Satellites, but also will be critical in the development of new sets of requirements for future satellite observations of our Earth system. As described in the EXPORTS Implementation Plan, the likelihood of the EXPORTS achieving its predictive goals will increase as the number and variety of observations available to develop and test novel algorithms increases. Hence, the EXPORTS program is particularly motivated to collaborate with international partners who would be interested to share their data sets to address these important issues.

An Amazing Opportunity for Ocean Science

EXPORTS is the first large-scale, coordinated opportunity aimed at understanding the ocean’s biological pump since the JGOFS program. Hence, the EXPORTS team is planning to create a long-term legacy for these one-of-a-kind datasets. NASA is supporting a full-time data manager to make sure that all of the information collected is easily accessible to all; as per NASA policies, all data will be freely available. Efforts are being made to ensure the intercalibration and interoperability of measurements made across different platforms, thus ensuring continuity of the datasets. EXPORTS also plans to over-collect whole water, filtered particulate, and trap-collected samples that can be used for many purposes, both now by collaborators, and in the future as analytical methodologies become more powerful.

The timing for EXPORTS could not be better. Our understanding of the biological pump and in particular, the fate of ocean NPP has rapidly advanced over the past decade. We now know that the biological pump is four-dimensional, which complicates our observational approaches, and that food web and aggregate dynamics, microbial community composition and function, individual organism physiology and behavior, and submesoscale turbulent transport are all components that need to be quantified. Further, our observing tools and capabilities have witnessed giant leaps over just the past couple of years. Novel imaging instruments can now measure particle and aggregate size distributions and identify and quantify plankton abundances. Genomic approaches enable the characterization of plankton communities and their physiology. Novel hyperspectral optical measurements of ocean reflectance as well as component inherent optical properties provide strong links to present and future satellite ocean color missions. High-resolution numerical models now enable the elucidation of submesoscale (100s m to ~10 km) processes that include food webs and biogeochemistry, while autonomous vehicles provide persistent and spatially distributed observations that complement the shipboard sampling. It seems the time for EXPORTS is now.

*Project recommended for funding by NSF, but not officially funded as of this publication.