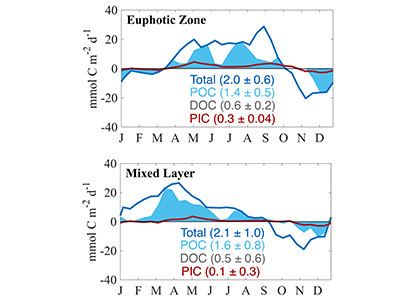 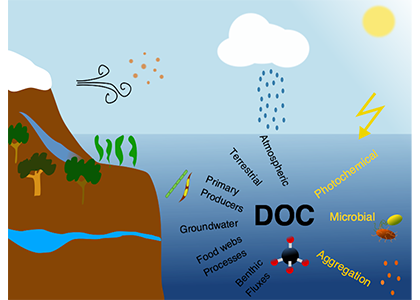 The dissolved organic carbon (DOC) pool is vital for the functioning of marine ecosystems. DOC fuels marine food webs and is a cornerstone of the earth’s carbon cycle. As one of the largest pools of organic matter on the planet, disruptions to marine DOC cycling driven by climate and environmental global changes can impact air-sea CO2 exchange, with the added potential for feedbacks on Earth’s climate system. 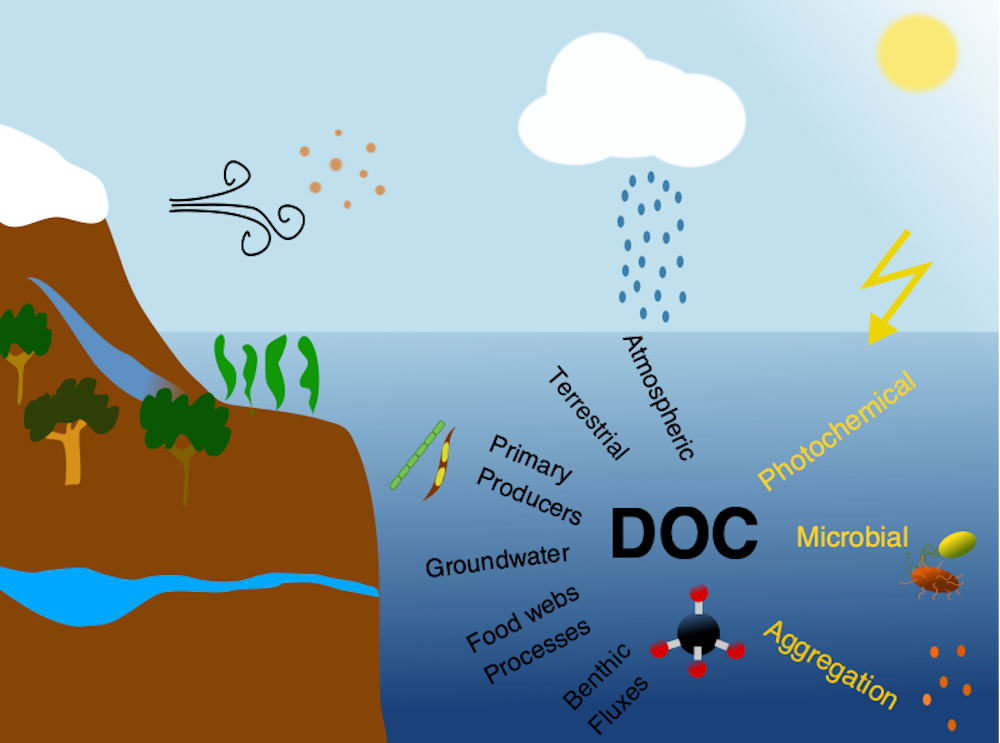 Since DOC cycling involves multiple processes acting concurrently over a range of time and space scales, it is especially challenging to characterize and quantify the influence of global change. In a recent review paper published in Frontiers in Marine Science, the authors synthesize impacts of global change-related stressors on DOC cycling such as ocean warming, stratification, acidification, deoxygenation, glacial and sea ice melting, inflow from rivers, ocean circulation and upwelling, and atmospheric deposition. While ocean warming and acidification are projected to stimulate DOC production and degradation, in most regions, the outcomes for other key climate stressors are less clear, with much more regional variation. This synthesis helps advance our understanding of how global change will affect the DOC pool in the future ocean, but also highlights important research gaps that need to be explored. These gaps include for example a need for studies that allow to understand the adaptation of degradation/production pathways to global change stressors, and their cumulative impacts (e.g. temperature with acidification). 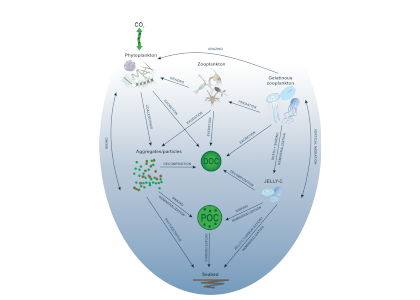 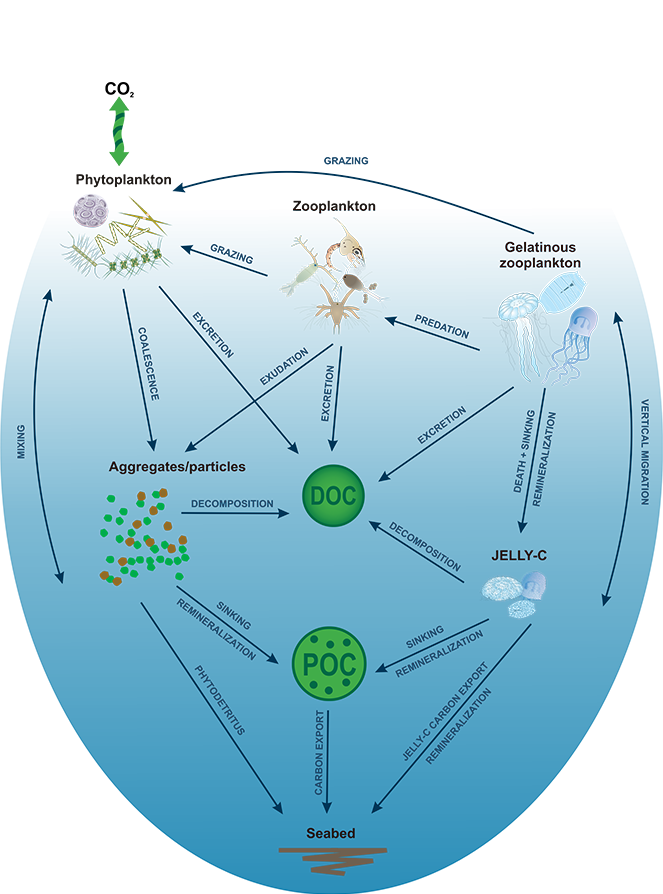 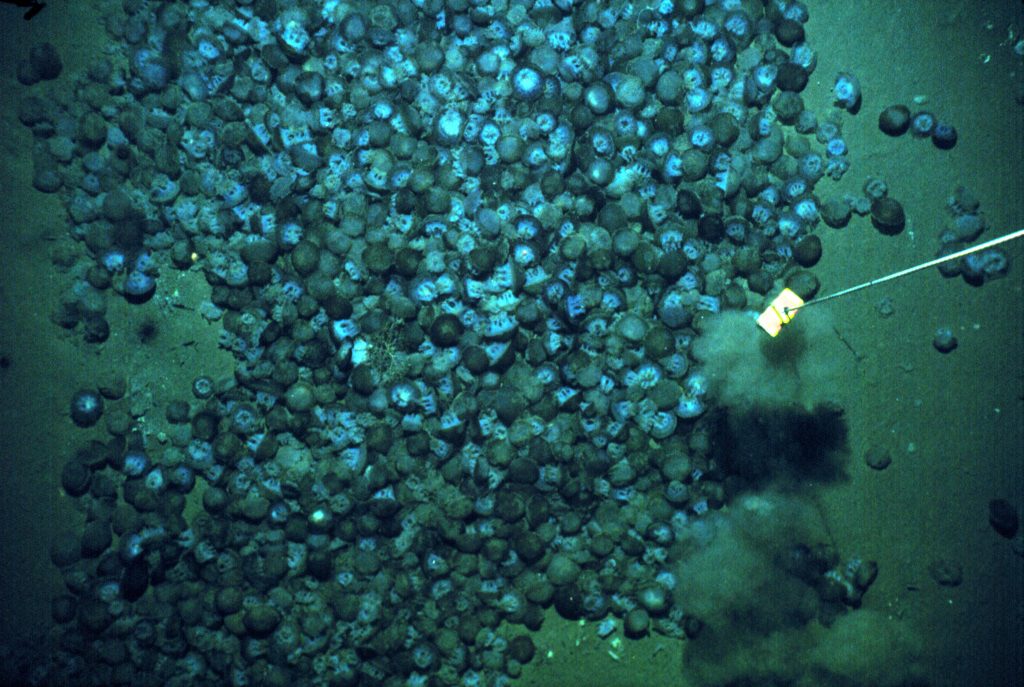 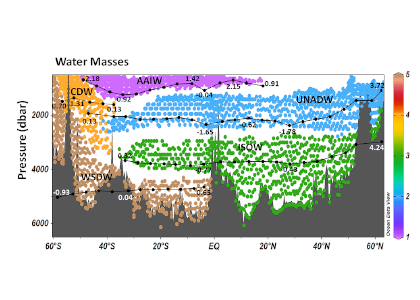 Oceanic dissolved organic carbon (DOC) ultimately exchanges with atmospheric CO2 and thus represents an important carbon source/sink with consequence for climate. Most of the DOC is recalcitrant to microbial degradation, with some fractions surviving for thousands of years. Therefore, DOC in the deep ocean was thought to be stable or to decrease slowly over decades to centuries due to biotic and abiotic sinks. However, a study published in Global Biogeochemical Cycles shows that there are some zones of the deep Atlantic Ocean where recalcitrant DOC experiences net production. Using data from oceanographic cruises across the Atlantic Ocean, the authors first identified the major water masses in the basin and the percentage of each in every sample taken for DOC analysis. The study revealed net additions of 27 million tons of dissolved organic carbon per year in the deep South Atlantic. On the other hand, the North Atlantic serves as a net sink, removing 298 million tons of carbon annually. DOC production observed in the deep Atlantic is probably due to the sinking particles that solubilize into DOC, since DOC enrichment was most evident at latitudes characterized as elevated productivity divergence zones. 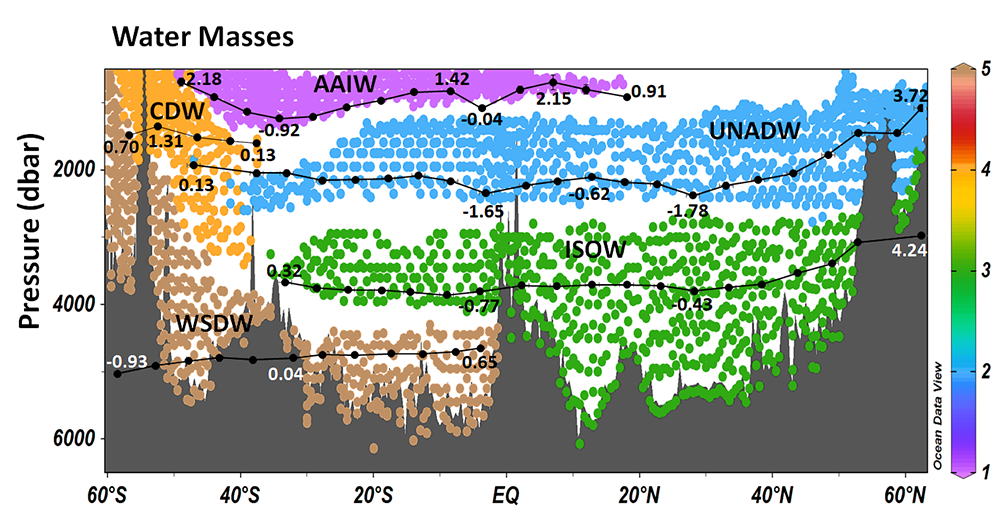 Considering that the net DOC production over the entire Atlantic basin euphotic zone is 0.70–0.75 Pg C year-1, the authors estimated that 30–39% of that DOC is consumed in the deep Atlantic subsequent to its export by overturning circulation. The upper North Atlantic Deep Water (UNADW) acts as the primary sink, accounting for 66% of the recalcitrant DOC removal in the North Atlantic. Conversely, the Antarctic Intermediate Water (AAIW) is the primary recipient, with 45% of recalcitrant DOC production in the South Atlantic, closely followed by the old UNADW that gains 44% of the recalcitrant DOC in the southern basin. 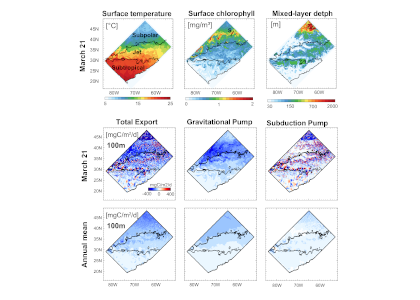 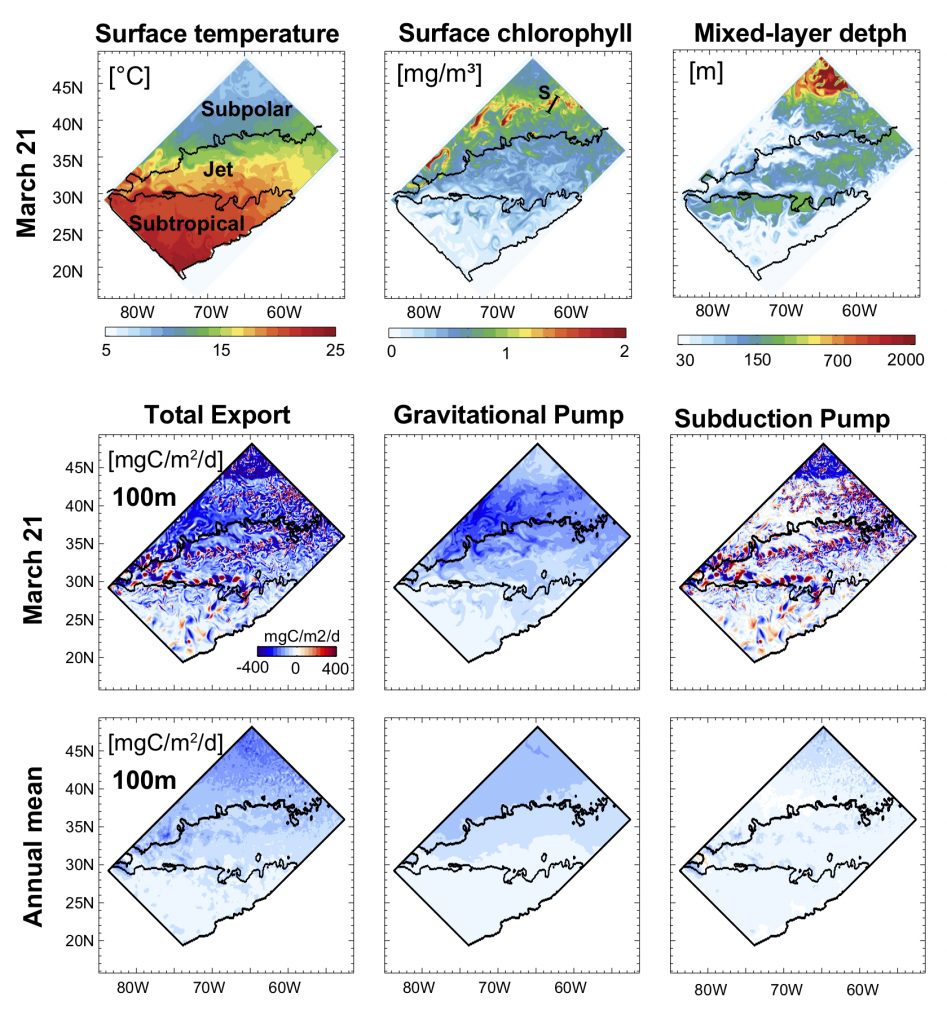 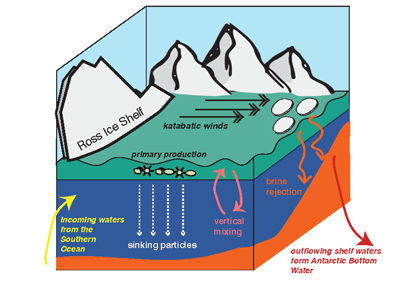 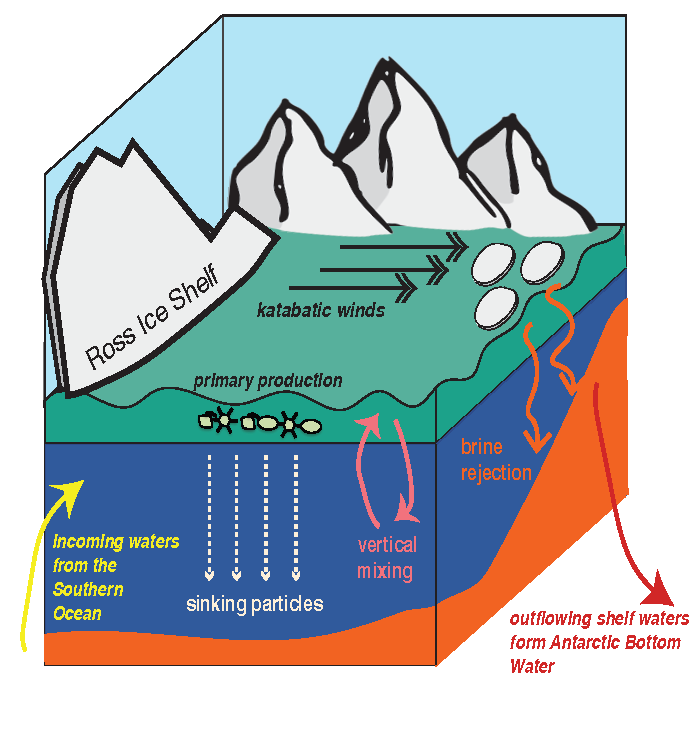