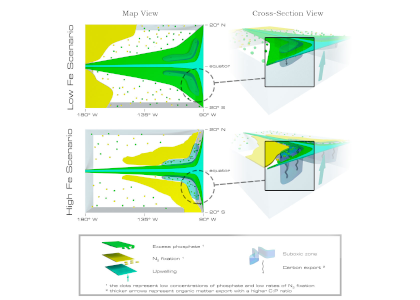 A role for tropical nitrogen fixers in glacial CO2 drawdown

Iron fertilization of marine phytoplankton by Aeolian dust is a well-established mechanism for atmospheric carbon dioxide (CO2) drawdown by the ocean. When atmospheric CO2 decreased by 90-100 ppm during previous ice ages, fertilization of iron-limited phytoplankton in the high latitudes was thought to have contributed up to 1/3 (30 ppm) of the total CO2 drawdown. Unfortunately, recent modeling studies suggest that substantially less CO2 (only 2-10 ppm) is sequestered by the ocean in response to high latitude fertilization.

The limited capacity for high latitude CO­2 sequestration in response to iron enrichment motivated the authors of a new study published in Nature Communications to address how lower latitude phytoplankton could contribute to CO2 drawdown. The authors used an ocean model to show that in response to Aeolian iron fertilization, dinitrogen (N2) fixers, specialized phytoplankton that introduce bioavailable nitrogen to tropical surface waters, drive the sequestration of an additional 7-16 ppm of CO2 by the ocean. 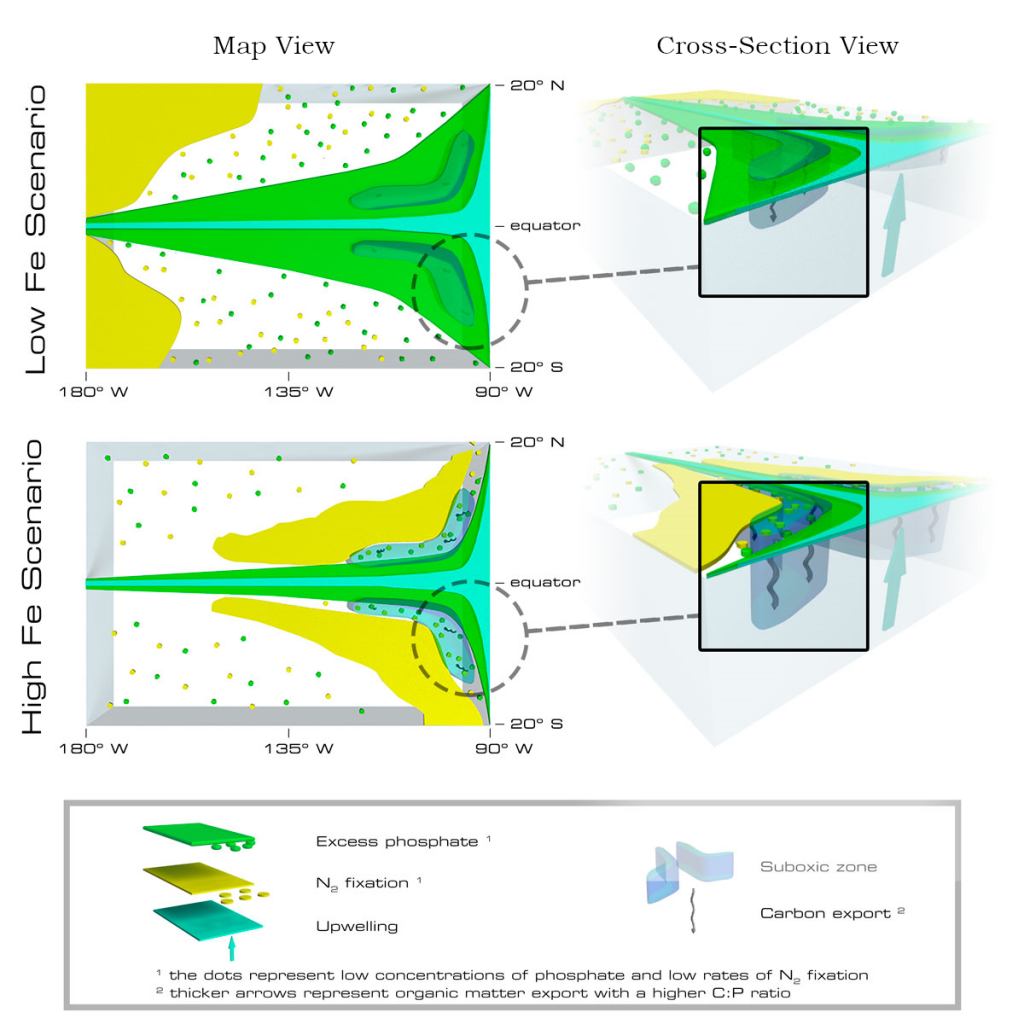 Figure 1: Scenarios of Fe supply to the tropical Pacific. In the low iron scenario, analogous to the modern climate, N2 fixation (yellow zone and dots) is concentrated in the Northwest and Southwest subtropical Pacific where aeolian dust deposition is greatest. Non-limiting PO4 concentrations (green zone and dots) exist within the tropics and spread laterally from the area of upwelling near the Americas and at the equator (blue zone). In the high Fe scenario, analogous to the glacial climate, N2 fixation couples to the upwelling zones in the east Pacific, enabling strong utilisation of PO4, the vertical expansion of suboxic zones (grey bubbles) and a deeper injection of carbon-enriched organic matter (downward squiggly arrows).

These results provide evidence of a tropical ocean CO2 sequestration pathway, the mere existence of which is hotly debated. Importantly, the study describes an additional mechanism of CO2 drawdown that is complementary to the high latitude mechanism. When combined, their contributions elevate iron-driven CO2 drawdown towards the expected 30 ppm, making iron fertilization a driver of a stronger biological pump on a global scale.