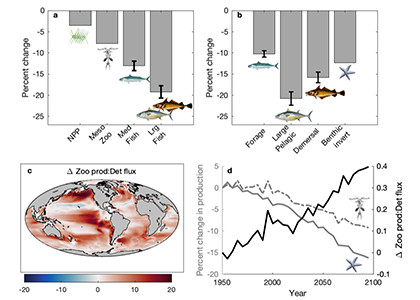 Global warming changes the conditions for all ocean life, with wide-ranging consequences. It is particularly difficult to predict the impact of climate change on fish because fish production is conditioned on both temperature and food resource (zooplankton and benthic organisms) changes. Climate change projections from Earth system models show a negative amplification of changes in global ocean net primary production (NPP), with an approximate doubling of production decreases from net primary producers to mesozooplankton. This “trophic amplification” continues up the marine food web to fishes. A new study published in Frontiers in Marine Science illustrates this amplification clearly when fishes are defined by their maximum body size, which describes their position in the food web (Figure 1a). However, decreases in globally integrated biomass and production were not limited to differences in size alone. Importantly, reduced abundances also varied by fish functional type (Figure 1b). 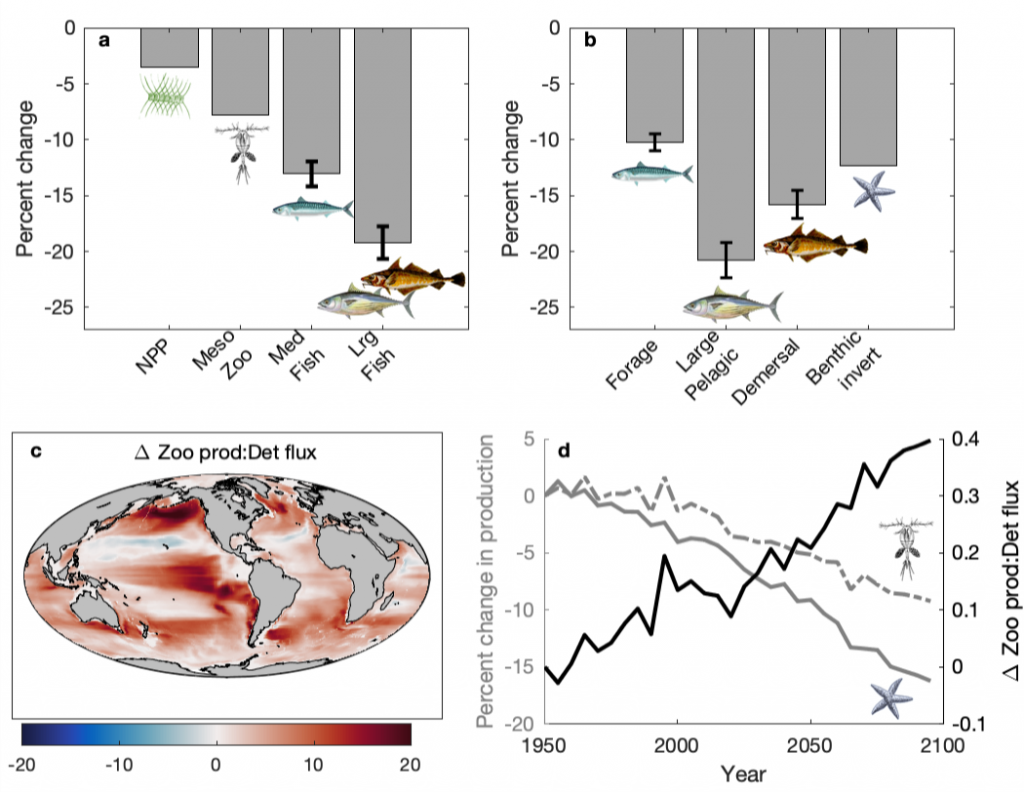 Despite the “pelagification” of marine food webs caused by unequal decreases in secondary production (Figure 1d) and subsequent increases in pelagic zooplankton production relative to seafloor detritus production (Figure 1c,d), large pelagic fish (e.g., tunas and billfishes) suffered the greatest declines and the highest degree of projection uncertainty. The result was a shift from benthic-based ecosystems historically dominated by large demersal fish (e.g., cods and flounders) towards pelagic-based ones dominated by smaller forage fish (e.g., sardines and herring). Any positive impacts of the pelagification of food resources on large pelagic fish were overwhelmed by the negative impacts of the overall reduction in global productivity, compounded by warming-induced increases in metabolic demands. Both the degree of change in the productivity of large pelagic fish and the magnitude of trophic amplification were sensitive to the temperature dependence of metabolic rates. Thus, better constraints are needed on empirical estimates of the effect of temperature on physiological rates to project the impacts of climate change on fish biomass and marine ecosystem structure.