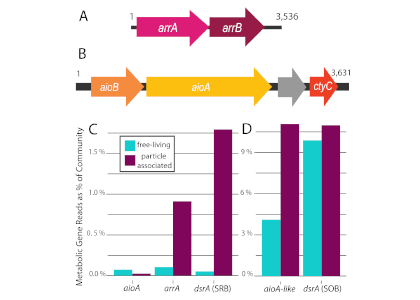 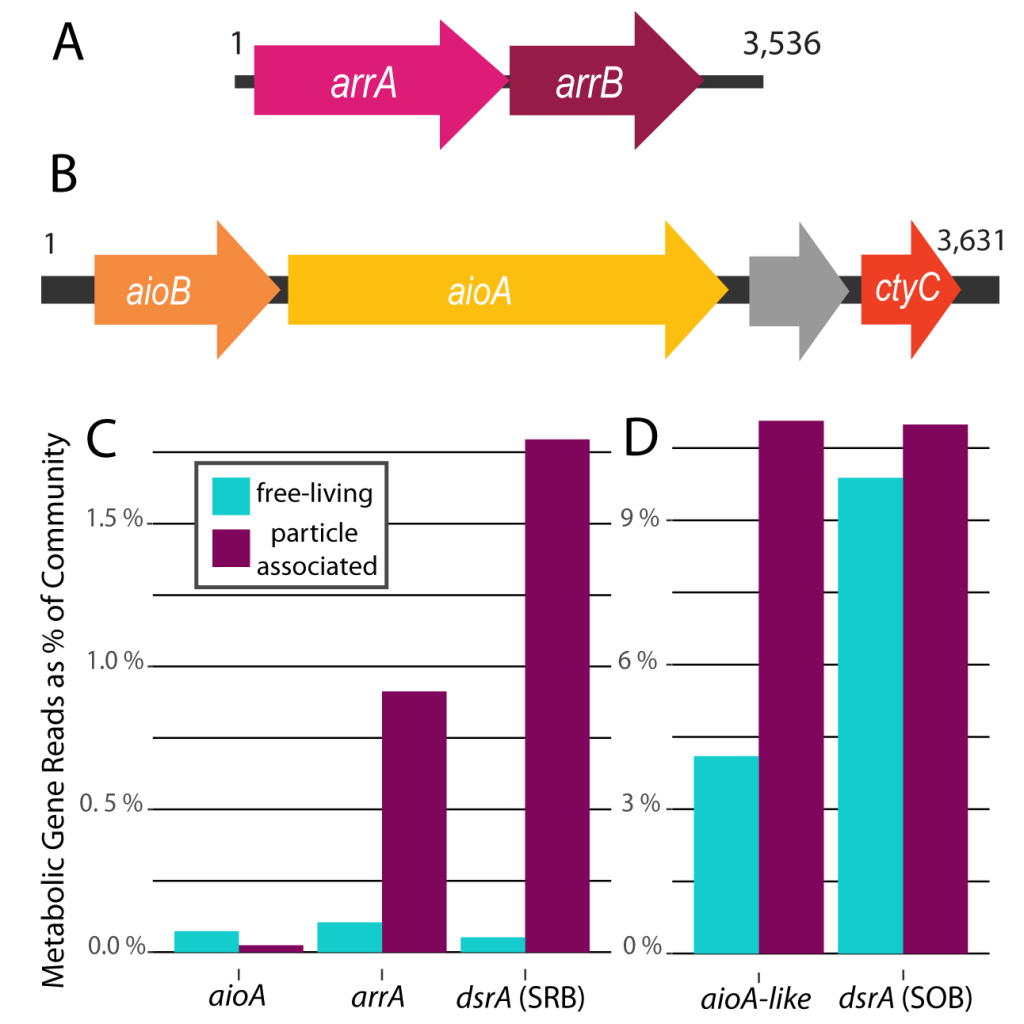 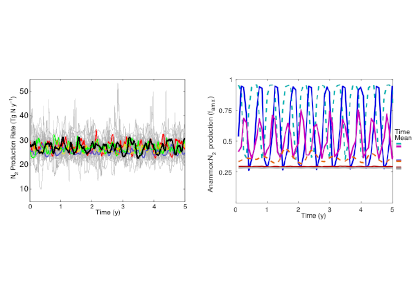 The removal of bioavailable nitrogen (N) by anaerobic microbes in the ocean’s oxygen deficient zones (ODZs) is thought to vary over time primarily as a result of climate impacts on ocean circulation and primary production. However, a recent study in PNAS using a data-constrained model of the microbial ecosystem in the world’s largest ODZ revealed that internal species oscillations cause local- to basin-scale fluctuations in the rate of N loss, even in a completely stable physical environment. Such ecosystem oscillations have been hypothesized for nearly a century in idealized models, but are rarely shown to persist in a three-dimensional ocean circulation model. 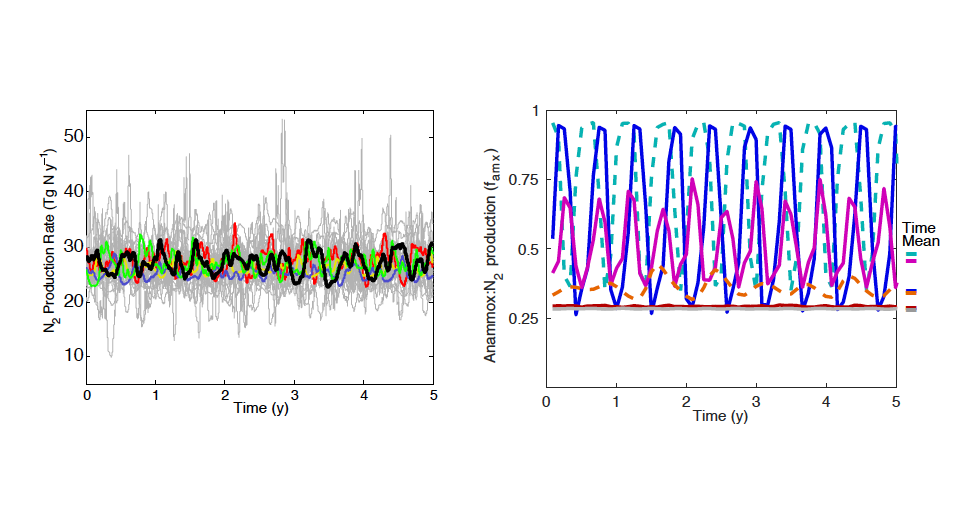 Figure caption. Ecological variability in the basin-scale rate of nitrogen loss over time (left) and in the local-scale contribution of autotrophic anammox to total N loss (right) in a model with unchanging ocean circulation. In the left panel, colors represent model simulations with different biological parameters. In the right panel, colors represent distinct locations within the ODZ in the standard model simulation.

These emergent ecosystem dynamics arise at the oxic-anoxic interface from O2-dependent resource competition between aerobic and anaerobic microbes, and leave a unique geochemical fingerprint: infrequent spikes in ammonium that are observable in nutrient measurements from the ODZ. Non-equilibrium ecosystem behavior driven by competition among aerobic nitrifiers, anaerobic denitrifiers, and anammox bacteria also generates fluctuations in the balance of autotrophic versus heterotrophic N loss pathways that help reconcile conflicting field observations.

These internally driven fluctuations in microbial community structure partially obscure a direct correspondence between the chemical environment and microbial rates, a universal assumption in biogeochemical models. Because of the fundamental nature of the underlying mechanism, similar dynamics are hypothesized to occur across wide-ranging microbial communities in diverse habitats. 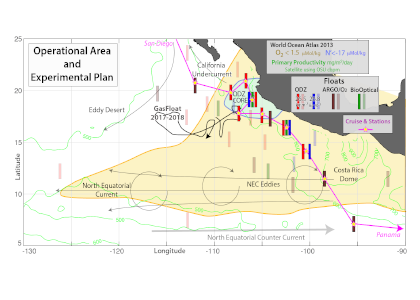 Autonomous measurement of N-loss in the Eastern Tropical North Pacific ODZ: An Invitation for Collaboration

By Mark A. Altabet (SMAST/U. Mass. Dartmouth), Craig McNeil, and Eric D’Asaro (both at APL / U. Washington)

Oxygen deficient zones (ODZs) constitute a small fraction of total oceanic volume yet play an important role in regulating global ocean carbon and nitrogen cycles. They are critical for regulating the ocean’s nitrogen budget, as loss of biologically available nitrogen to N2 gas (N-loss) within ODZs is estimated to be 30 to 50% of the global total. However, temporal and spatial variability in N-loss rates have been undersampled by ship-based process studies leaving substantial uncertainty in overall rates. While local and short-term regulation of N-loss by O2 and organic matter availability is well documented, little is known about the larger scale temporal/spatial variability in N-loss that may result from physical forcings such as remote ventilation, seasonal variability in vertical exchange with the near-surface layer, and mesoscale eddies. Understanding the impact of larger scale physical forcings on N-loss as mediated through O2 and organic flux is needed to fully understand the causes and consequences of any future ODZ expansion. To achieve this, we need sustained observations by a distributed array capable of detecting synoptic variability.

To address these issues, a new NSF-funded project will carry out a multiyear, autonomous float-based observational program to answer the following questions: 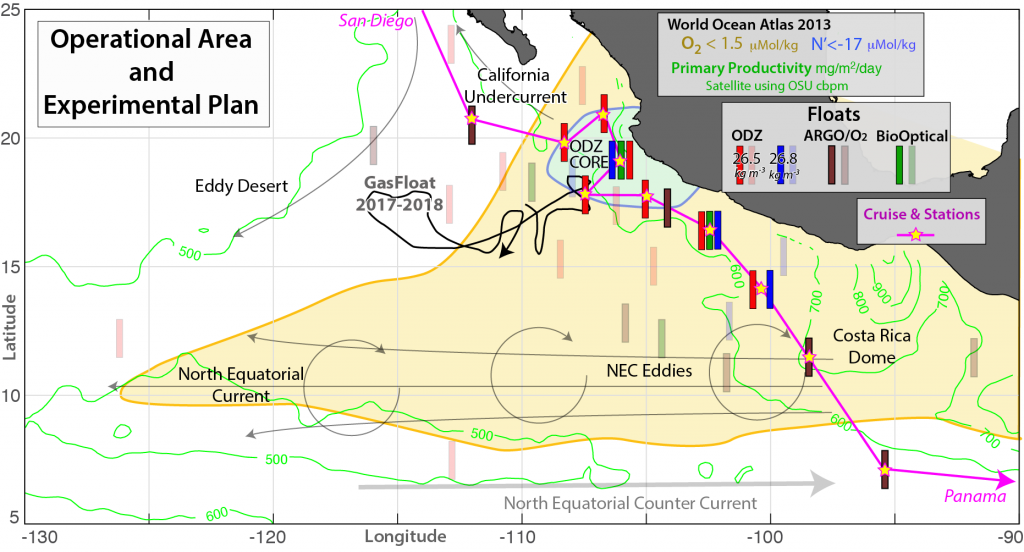 This project will exploit our ability to make in situ, ultra-high precision measurement of N2 concentration (~0.1 umol/kg) and use commercially available O2 sensors to measure O2 in the 10s of nM range. Our study area is the Eastern Tropical North Pacific (ETNP), the largest ODZ and the region of our successful pilot deployments (Figure 1). Over a multi-year period, our study will determine in situ nM-level O2 and biogenic N2 on float profiles distributed throughout the ETNP and encompassing geographic gradients in O2 and surface productivity. For the first time, our study will also determine in situ N-loss rates from changes in N2 concentration during one- to two-week Lagrangian float deployments drifting along a constant density surface (Figure 2). A pilot two-year float (‘GasFloat, Figure 1) deployment in the ETNP has documented our ability to do so. Critically, our float-based approach more closely matches the frequency and distribution of observations to the expected variability in biogenic N2 production, as compared to prior work. This study will also dramatically increase the data density in this region by acquiring >500 profiles/drifts for N2 and >1000 profiles for nM O2. 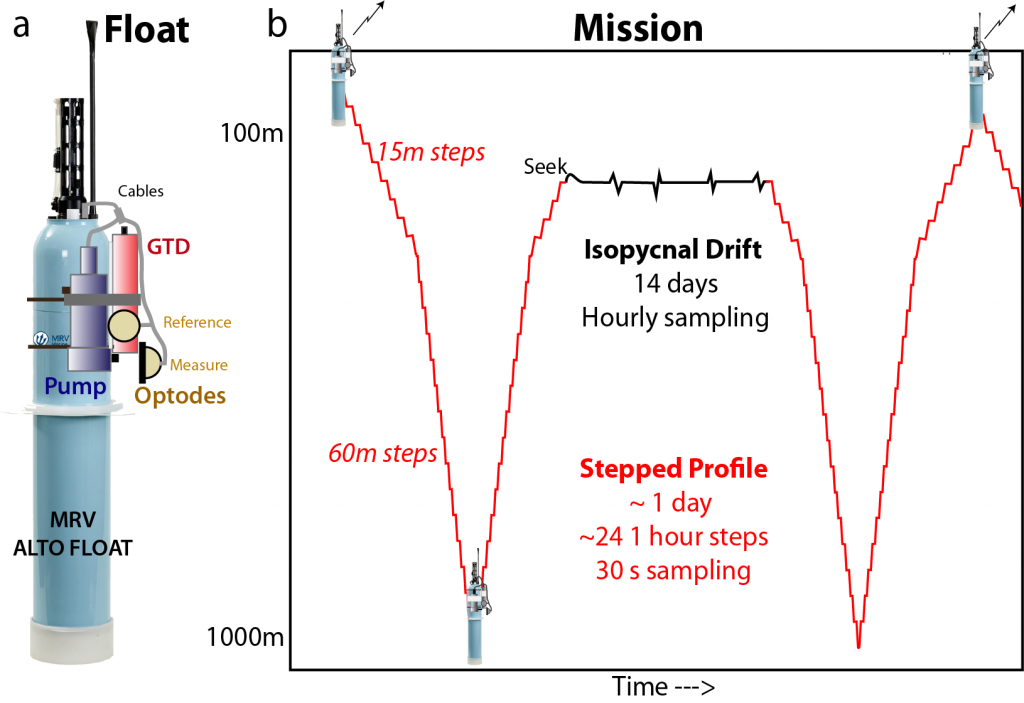 Figure 2. (a) Schematic of float system to be deployed (b) Example of float mission including 2-week isopycnal drift.

We anticipate float deployment in summer 2020 via a UNOLS vessel. Investigators interested in collaborative participation through contribution of autonomous instrumentation and/or making shipboard measurements are encouraged to contact the lead PI Mark Altabet at maltabet@umassd.edu.  Similarly, students interested in graduate research opportunities through this project should contact the lead PI.