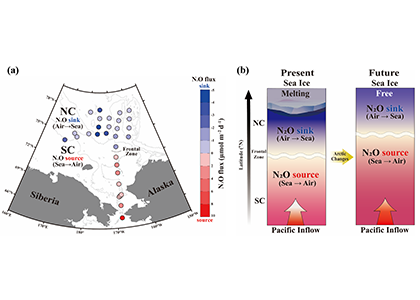 Contrasting N2O fluxes of source vs. sink in western Arctic Ocean during summer 2017

During the western Arctic summer season both physical and biogeochemical features differ with latitude between the Bering Strait and Chukchi Borderland. The southern region (Bering Strait to the Chukchi Shelf) is relatively warm, saline, and eutrophic, due to the intrusion of Pacific waters that bring heat and nutrients in to the western Arctic Ocean (WAO). Because of the Pacific influence, the WAO is one of the most productive stretches of ocean in the world. In contrast, the northern region (Chukchi Borderland to the Canada Basin) is primarily influenced by freshwater originating from sea ice melt and rivers, and is relatively cold, fresh, and oligotrophic. A frontal zone exists between the southern region and northern region (~73°N) due to the distinct physicochemical contrast between mixing Pacific waters and freshwater. These regions support distinct bacterial communities also, making the environmental variations drivers extremely relevant to nitrous oxide (N2O) dynamics.

A recent study published in Scientific Reports examined the role of the WAO as a source and a sink of atmospheric N2O. There are obvious differences in N2O fluxes between southern Chukchi Sea (SC) and northern Chukchi Sea (NC). In the SC (Pacific water characteristics dominate) N2O emissions act as a net source to the atmosphere (Figure 1a). In the NC (freshwater dominant) absorption of atmospheric N2O into the water column suggests that this region acts as a net sink (Figure 1a). The positive fluxes of SC occurred with relatively high sea surface temperature (SST), sea surface salinity (SSS), and biogeochemically-derived N2O production, whereas the negative fluxes of NC were associated with relatively low SST, SSS, and little N2O production. These linear relationships between N2O fluxes and environmental variables suggest that summer WAO N2O fluxes are remarkably sensitive to environmental changes.

This study suggests a potential scenario for future WAO changes in terms of accelerating Arctic change. Increasing inflow of the Pacific waters and rapidly declining sea-ice extent are critical. The increasing inflow of warm nutrient-enriched Pacific waters will likely extend the SC N2O source region northward, increasing productivity, and thereby intensifying nitrification. All of which would lead to a strengthening of the WAO’s role as an N2O source. A rapid loss of the sea ice extent could ultimately lead to a sea-ice-free NC, and again, a northward shift, which would result in a diminished role of the NC as an N2O sink (Figure 1b). While improving our understanding of WAO N2O dynamics, this study suggests both a direction for future work and a clear need for a longer-term study to answer questions about both seasonal variations in these dynamics and possible interannual to climatological trends.