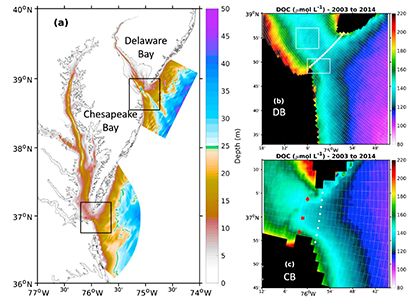 Dissolved organic carbon (DOC) is a food supplement that supports microorganism growth and plays a major role in the global carbon cycle via the microbial loop, which integrates DOC into the marine food web. DOC from two major estuaries on the US East Coast, Chesapeake (CB) and Delaware Bay (DB), represent major contributors to the adjacent shelf region’s carbon cycle. In a recent study published in Journal of Geophysical Research: Oceans, the authors combined an integrated tracer flux approach, field and satellite data, machine learning, and a physical circulation model to quantify DOC stocks and export fluxes at the mouths of CB and DB. 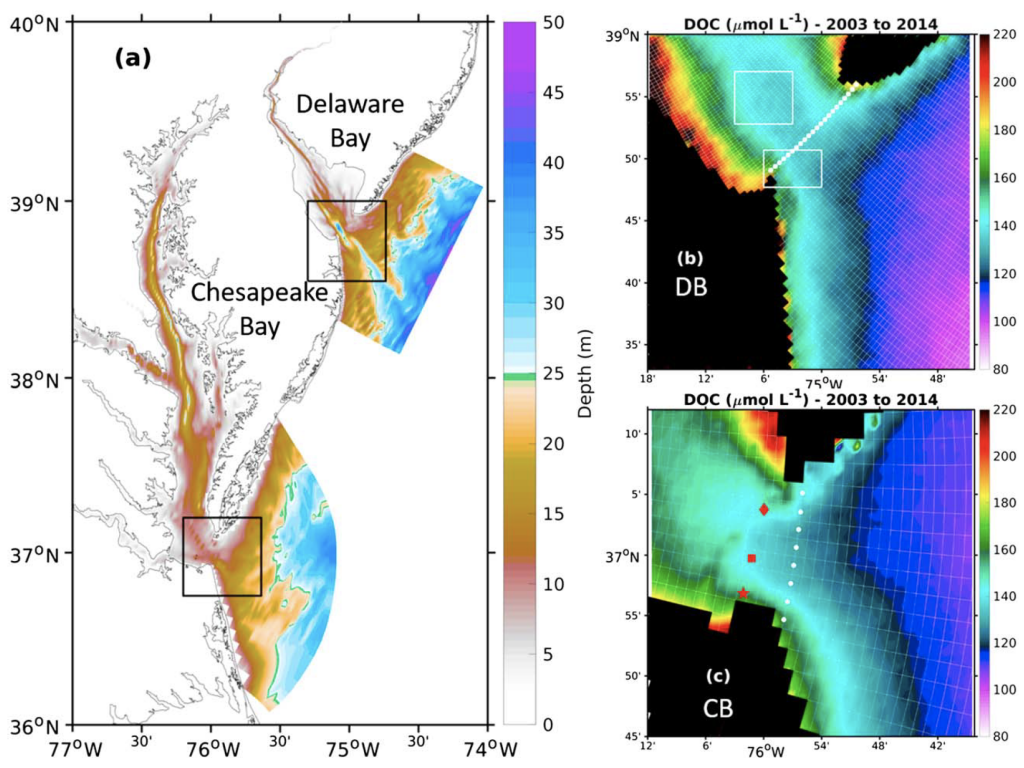 Figure 1: Model bathymetry for the CB and DB models (a). Twelve‐year (2003–2014) mean MODIS DOC for DB (b) and CB (c) with ROMS grid lines superposed in white and land mask in black. The white dots across the bay mouths are the grid points used in the flux computation. The squares in (a) correspond to the size (50 km × 50 km) and location of the DB and CB MODIS images shown in (b) and (c). The boxes near DB mouth in (b) delimit the cluster of available in situ data stations. The red star, red square, and red diamond near CB mouth in (c) are the locations of in situ data for validation. 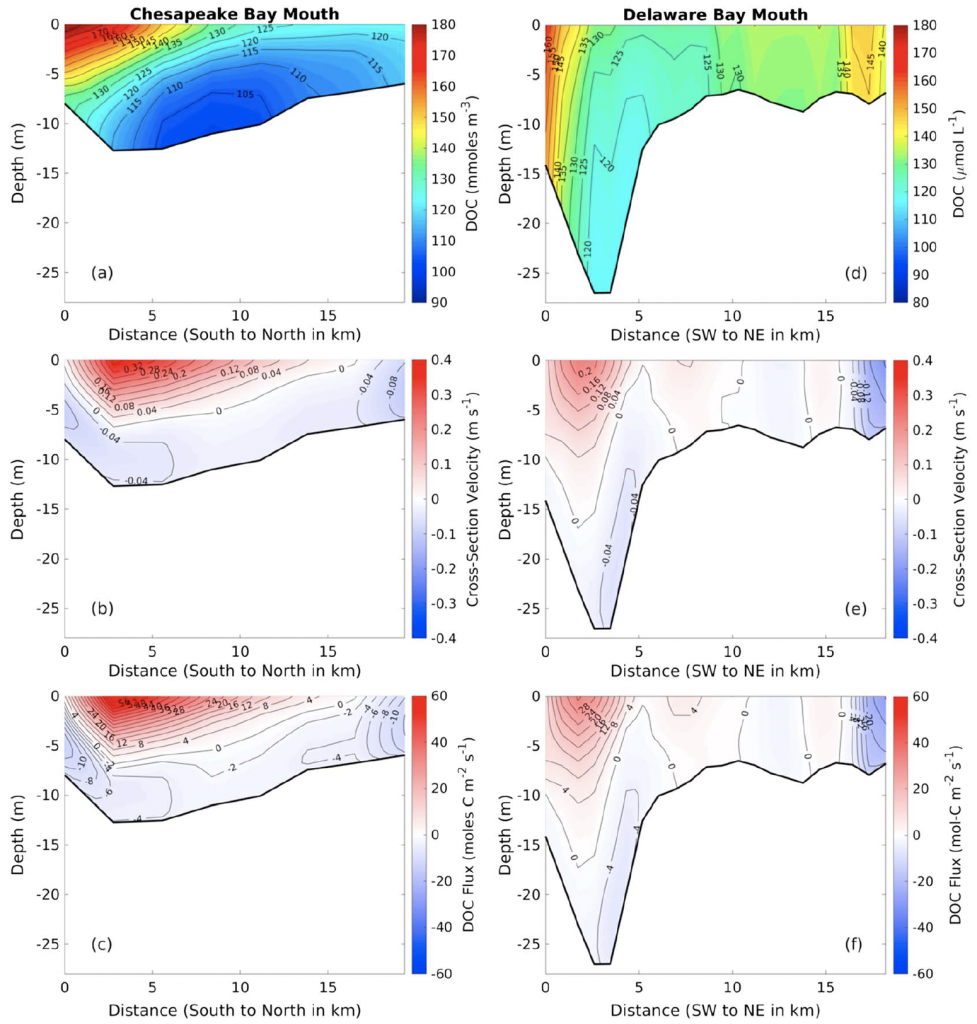 This novel methodology not only improved estimates of combined DB-CB DOC fluxes to the US East Coast, but it also improved quantification of contrasting estuarine properties that affect DOC export such as riverine inputs, timescales of variability, and geomorphology. The combined CB-DB DOC contribution represents 25% of the total organic carbon exported and 27% of the total atmospheric carbon dioxide taken up by the Mid-Atlantic Bight (MAB)—the coastal region extending from Massachusetts to North Carolina. Spatial and, to a lesser extent, temporal covariations of velocity and DOC concentration contributed to the fluxes. The primary drivers of DOC flux differences for these two estuaries are their geomorphologies and volumes of freshwater discharge into the bays (74 billion m3/year for CB and 21 billion m3/year for DB). Terrestrial DOC inputs are similar to the export of DOC at the bay mouths at annual and longer timescales, but diverge significantly at shorter timescales of days to months.

The five-year mean DOC flux for CB and DB are 0.21 (confidence intervals 0.15, 0.27) Tg C/year and 0.05 (0.04, 0.07) Tg C/year, respectively. A flux decomposition analysis showed that temporal and spatial covariations in the DOC flux at the mouth of both bays play a significant role in determining the net export of DOC from the estuaries, which suggests that accurate estimates of estuarine DOC export require information on scales that properly resolve the temporal and spatial variability of water flux and DOC concentration. Neglecting these temporal and spatial covariations in the DOC flux leads to a 40% underestimation of the DOC flux in CB and 28% in DB, which would have a significant impact on the accuracy of carbon budget assessments and the role that these estuaries have on the coastal environment. This combination of satellite and field observations with statistical and numerical models shows great promise for capturing these covariations to better quantify the role of estuaries in the coastal carbon cycle.