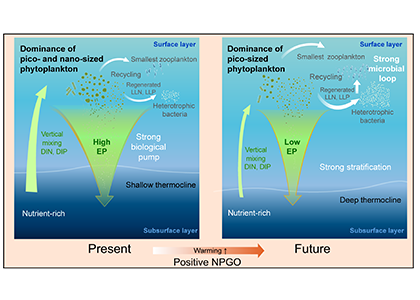 Is it a shift of the surface ecosystem toward small cells in the eastern North Pacific subtropical gyre?

The eastern North Pacific subtropical gyre (NPSG) ecosystem contains a large proportion of the ocean surface, resulting in a significant impact on the global ocean primary production and export production. The NPSG is influenced by the interannual climate variabilities of the Pacific decadal oscillation and North Pacific gyre oscillation (NPGO). In particular, a recent report associated the NPGO mode with favorable physical conditions for phytoplankton growth in the eastern NPSG environment. However, the NPGO mode-driven changes in the relationship between primary production and export production and the processes driving these changes remain unclear in the eastern NPSG environment.

A study published in Frontiers in Marine Science investigated the temporal changes in the physical-biogeochemical-ecological responses in the surface eastern NPSG to the NPGO mode, using a suite of oceanographic measurements from Station ALOHA (22.75°N and 158°W) from 1992–2018. When the NPGO mode was in positive phases (N2+: 1998‒2004, N4+: 2007‒2013), the eastern region of NPSG was related to deepened mixed layer depth, conducive to high primary production. Accordingly, the N2+ phase showed a high export production, associated with increase in nano-sized phytoplankton group and inorganic and organic nitrogen-to-phosphorus (N:P) ratios. However, even under the conditions of deep mixed layer depth and increased primary production, the N4+ phase has a low export production. This difference is attributed to multiple physical and biogeochemical factors, such as the depression of thermocline, shift toward the pico-sized phytoplankton group, increase in smallest-sized mesozooplankton and heterotrophic bacteria, and decrease in N:P ratios. Under high stratification induced by prolonged warming, these results suggest that the future surface eastern NPSG may experience a permanent shift toward small cells (Figure 1), leading to a reduction in the biological pump. 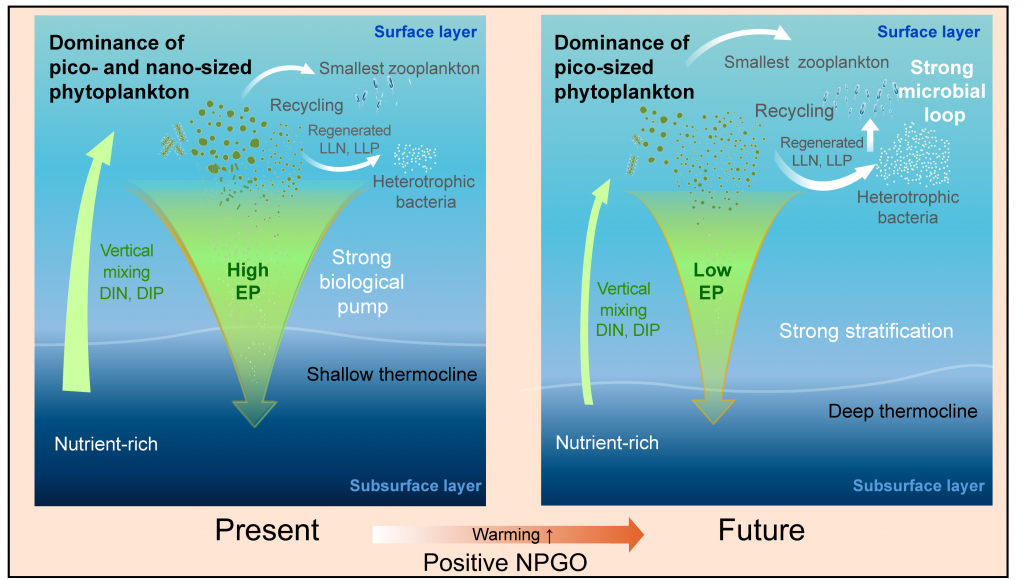