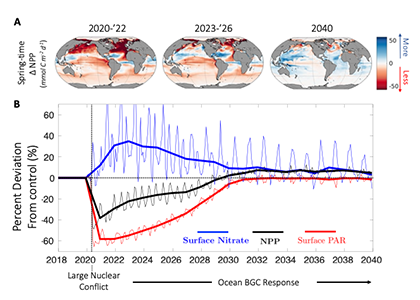 A new ocean state after a nuclear war

Russia’s invasion of Ukraine brings the threat of nuclear warfare to the forefront. But how would modern nuclear detonations impact the world today? If used accidentally or intentionally, nuclear arsenals would endanger all life on Earth. A new study published in AGU Advances provides stark information on the global impact of nuclear war in a global earth system model, with a focus on marine environments. In the simulation, nuclear firestorms release soot and smoke into the upper atmosphere that would block out the sun. This results in terrestrial crop failure and a major expansion of sea ice, but also dramatic and long-lived changes to marine biogeochemistry.

The sudden drop in light and ocean temperatures, especially in the Arctic to the North Atlantic and North Pacific, would decimate marine algae, the foundation of the marine food web, essentially creating a famine in the ocean. Eventually, marine productivity recovers, but the underlying biogeochemical cycles remain substantially altered. This occurs because even though the ocean cools rapidly after the initial conflict, when the smoke clears it does not return to the pre-war state. Instead, deep mixing and overturning during the cooling event drive a new ocean state, characterized by cooler subsurface temperatures and a shoaling of the nitracline that results in higher surface nitrate delivery. This new state favors a transition from smaller phytoplankton to diatoms with lower light requirements but higher nutrient demands. This leads to a decrease in surface iron as diatoms strip more of it from the water column once they sink. Ironically, an initial increase in surface nutrients (including iron) eventually leads to more iron stress in traditionally High Nutrient-Low Chlorophyll regions. In contrast, nitrate-limited regions such as subtropical gyres experience higher productivity. These changes last for decades, possibly centuries, following the war.  We expect similar ocean biogeochemical perturbations after large cooling events driven by volcanic eruptions and asteroid impacts. 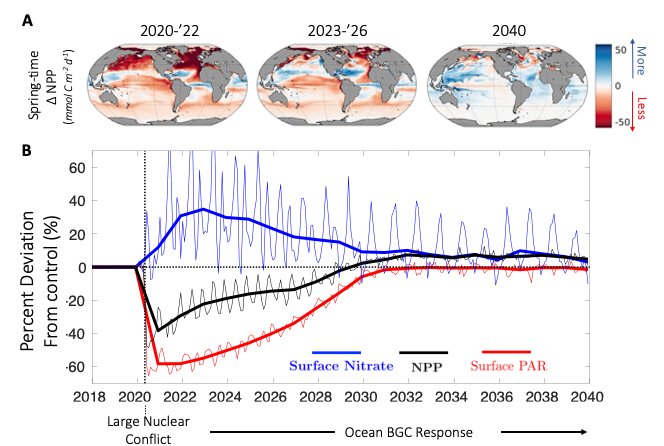 Figure Caption: A global earth system model of impacts following a large nuclear event. Net Primary Production (NPP) is dramatically reduced in the immediate aftermath of the conflict (2020-2022). Productivity begins to recover, relative to the control run, in the tropics and subtropics (2023-2026) but globally integrated NPP does not until 2029, and remains depressed at high latitudes for decades longer, despite globally integrated gains (2040). This change is largely driven by the competing effects of elevated nutrient (Surface Nitrate) and light (Surface PAR) availability.

As we come to terms with the reality that negative emissions technologies may be required to meet acceptable emissions pathways, there is an obvious and troubling analog. The inertia of physical and biogeochemical processes in the ocean means that once they have been sufficiently disturbed, they may not recover rapidly, if ever.