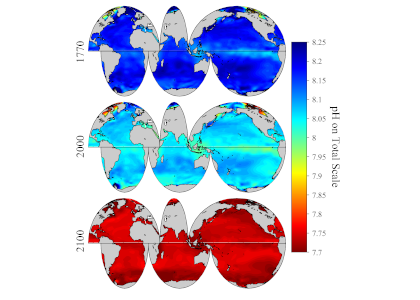 The past, present, and future of the ocean carbon cycle: A global data product with regional insights

A new study published in Scientific Reports debuts a global data product of ocean acidification (OA) and buffer capacity from the beginning of the Industrial Revolution to the end of the century (1750-2100 C.E.). To develop this product, the authors linked one of the richest observational carbon dioxide (CO2) data products (6th version of the Surface Ocean CO2 Atlas, 1991-2018, ~23 million observations) with temporal trends modeled at individual locations in the global ocean. By linking the modeled pH trends to the observed modern pH distribution, the climatology benefits from recent improvements in both model design and observational data coverage, and is likely to provide more accurate regional OA trajectories than the model output alone. The authors also show that air-sea CO2 disequilibrium is the dominant mode of spatial variability for surface pH, and discuss why pH and calcium carbonate mineral saturation states (Omega), two important metrics for OA, show contrasting spatial variability. They discover that sea surface temperature (SST) imposes two large but cancelling effects on surface ocean pH and Omega, i.e., the effects of SST on (a) chemical speciation of the carbonic system; and (b) air-sea exchange of CO2 and the subsequent DIC/TA ratio of the seawater. These two processes act in concert for Omega but oppose each other for pH. As a result, while Omega is markedly lower in the colder polar regions than in the warmer subtropical and tropical regions, surface ocean pH shows little latitudinal variation. 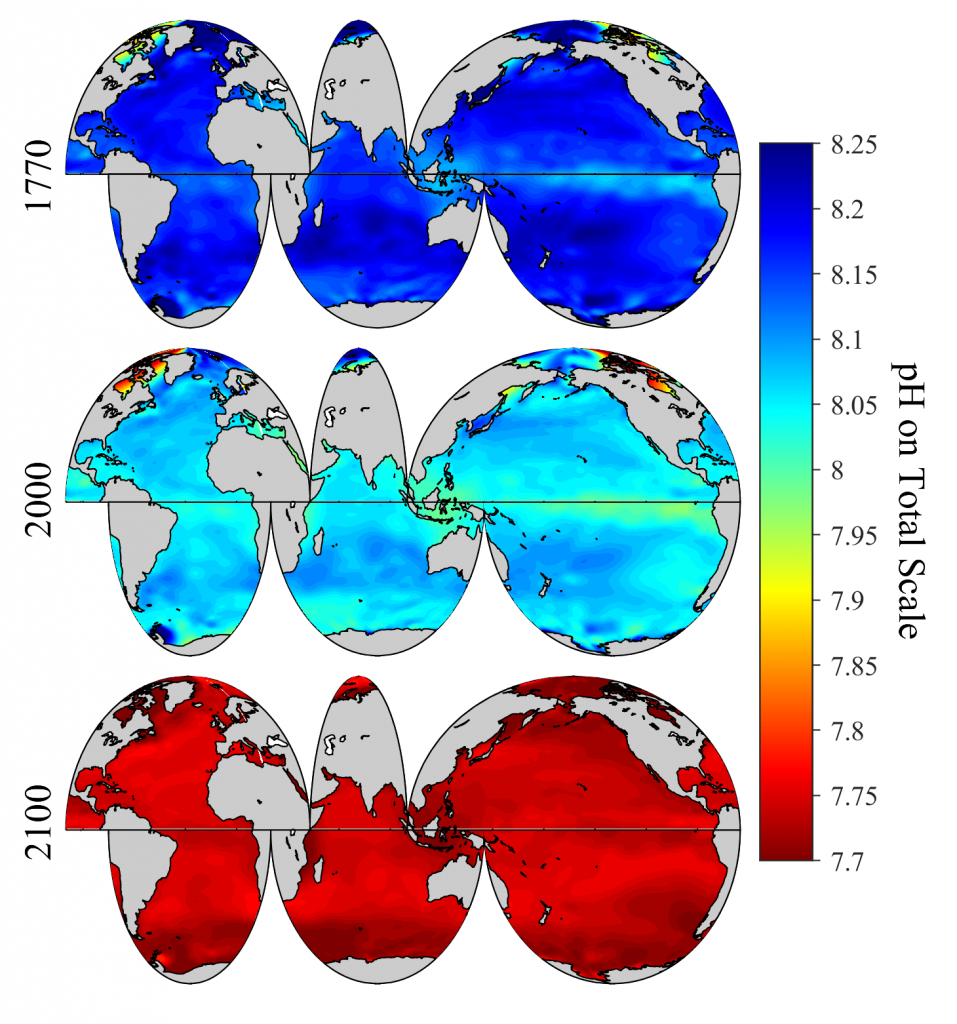 This data product, which extends from the pre-Industrial era (1750 C.E.) to the end of this century under historical atmospheric CO2 concentrations (pre-2005) and the Representative Concentrations Pathways (post-2005) of the Intergovernmental Panel on Climate Change (IPCC)’s 5th Assessment Report, may be helpful to policy-makers and managers who are developing regional adaptation strategies for ocean acidification.