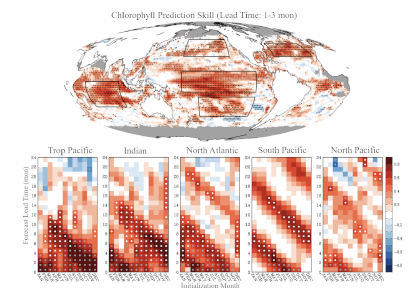 Earth System Models (ESMs) are powerful and effective tools for exploring and predicting marine ecosystem response to environmental change, including biogeochemical processes that underlie threats to ocean health such as ocean acidification, deoxygenation, and changes in productivity. Seasonal to interannual marine biogeochemical predictions with ESMs hold great promise for exploring links between climate and marine resources such as fisheries but have thus far been challenged by limitations associated with observational initialization, model structure, and computational availability. In a recent study published in Science, authors integrated the Geophysical Fluid Dynamics Laboratory’s (GFDL) COBALT (Carbon, Ocean Biogeochemistry and Lower Trophics) marine biogeochemical model with seasonal to multi-annual climate predictions from GFDL’s CM2.1 climate model to examine marine ecosystem futures on these shorter time scales. The global biogeochemical forecasts were initialized on the first of each month between 1991 and 2017 with 12 ensemble members in each prediction, creating a database of nearly 4000 forecasts and 8000 simulation years. The model skillfully predicted seasonal to multi-annual chlorophyll fluctuations in many ocean regions (Figure 1). 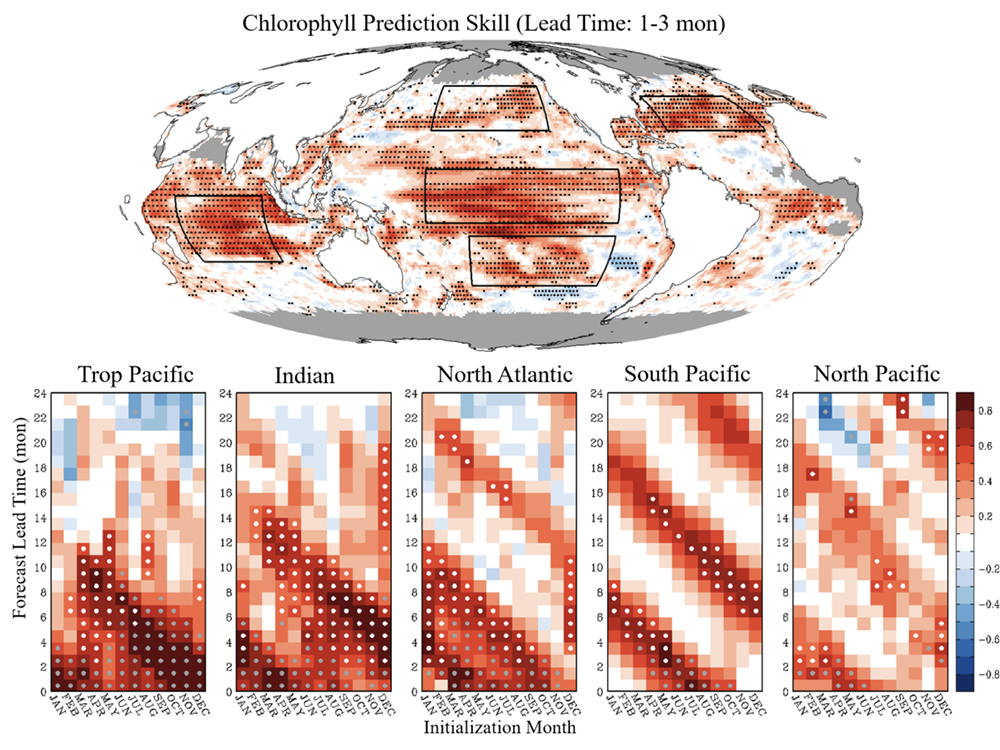 Figure 1: Prediction skill in reproducing observed variations of monthly chlorophyll anomaly. (Top) Correlation coefficient between predicted and observed chlorophyll at 1-3 month lead time during the period 1997-2017. Stippled areas indicate that the correlation is significantly greater than 0 with 95% confidence. Areas with less than 80% satellite chlorophyll coverage are masked in grey. (Lower panels) Correlation coefficient between predicted and observed chlorophyll as a function of forecast initialization month (x-axis) and lead time (y-axis) in tropical Pacific, Indian, North Atlantic, North Pacific, and South Pacific oceans. In all panels, the darker the red, the higher the correlation up to a perfect correlation of 1.0. White indicates no correlation, while blue indicates negative correlation.

These results suggest that annual fish catches in selected large marine ecosystems can be predicted from chlorophyll and sea surface temperature anomalies up to 2-3 years in advance. Given that fisheries predictions sometimes failed to the point of commercial stock collapse in the past, this prediction capacity could be vital for fisheries managers. Biogeochemical prediction systems can extend beyond sea surface temperature and chlorophyll to include other potential drivers (e.g., oxygen, acidity, net primary production, zooplankton, etc.) as highly valuable tools for marine resource managers of dynamic and changing ecosystems. 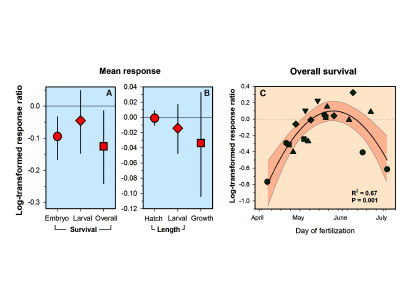 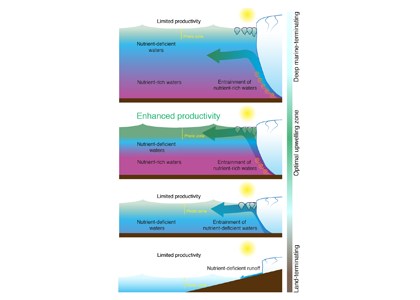 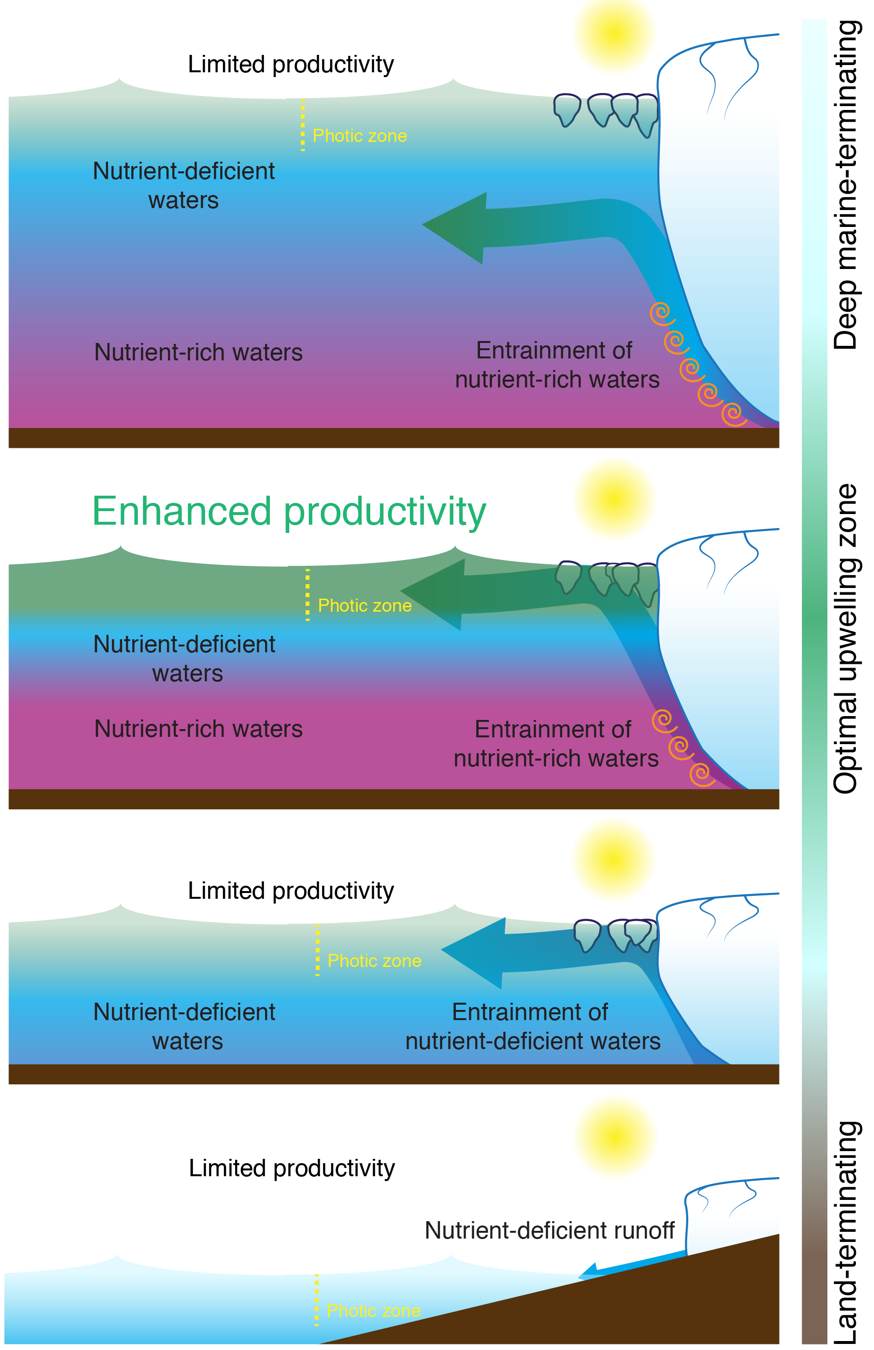 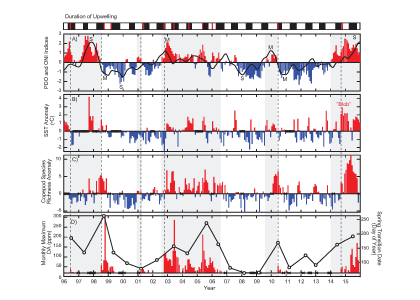 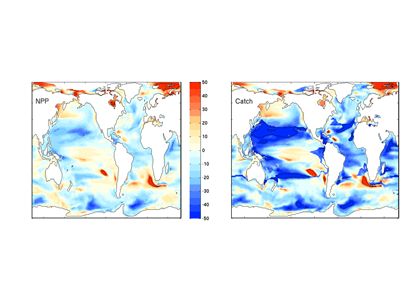 Reconciling fisheries catch and ocean productivity in a changing climate