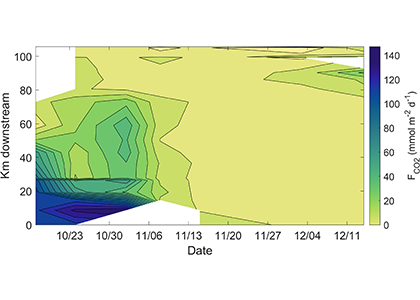 The world is getting stormier, and recent evidence shows significant impacts on coastal carbon cycling. The upticks in extreme weather events such as tropical cyclones have resulted in enhanced delivery of nutrients and organic matter across the land-ocean continuum. Lagoonal estuaries such as the Albemarle-Pamlico Sound (APS) in North Carolina and Galveston Bay in Texas are key coastal environments in which we can observe the long-term carbon cycling consequences of these events. Residence times of these coastal environments are on the order of months to over a year, providing ample opportunity for biogeochemical processing. Emerging from studies of Atlantic and Gulf of Mexico hurricanes in 2016 and 2017 is a clear example of the role of terrestrial dissolved organic carbon (DOC) as a key reactant driving the observed carbon cycling and ecosystem effects ( Figure 1). 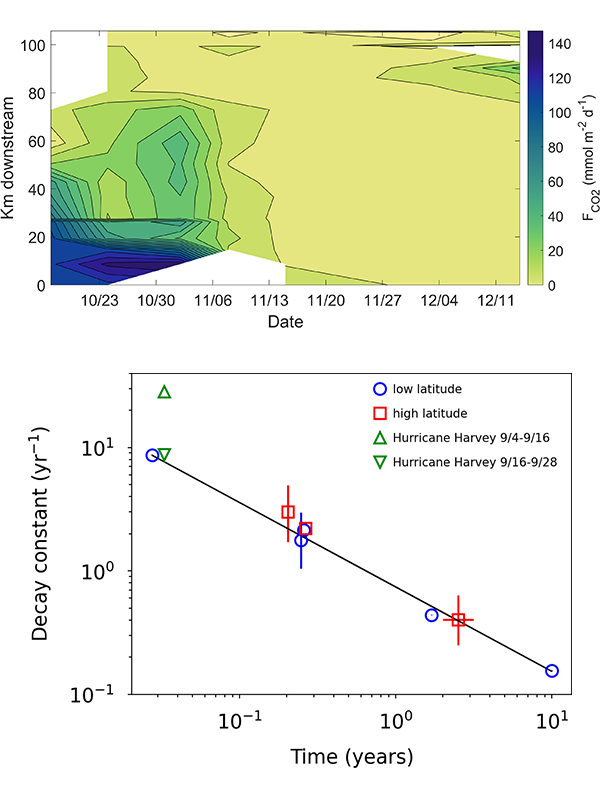 Figure. 1. The impact of hurricanes on CO2 fluxes (top) and terrestrial DOC decay constants (bottom) demonstrate the sustained effect on the coastal carbon cycle caused by extreme weather events. Top panel shows results from Hurricane Matthew in 2016, where date is month and day and Km downstream represents observations taken along the main axis of the Neuse River Estuary and lower Pamlico Sound, eastern North Carolina. FCO2 is the daily sea-to-air flux of CO2 estimated from measurements of temperature, salinity, dissolved inorganic carbon, and wind speed. The results indicate the Sound existed as a weak yet sustained CO2 source to the atmosphere well after the storm. Outgassing of CO2 is driven by the rapid mineralization of terrestrial DOC. Bottom panel shows the high bioreactivity of flood-derived terrestrial DOC indicated by elevated microbial decay constants for Galveston Bay and the coastal Gulf of Mexico in 2017 as compared to high and low latitude coastal environments.

In coastal North Carolina, 36 tropical cyclones (TCs), including three floods of historical significance in the past two decades, have occurred in the past 20 years. The lingering effects of these storms include extensive periods of carbon dioxide (CO2) supersaturation. For example, Hurricane Matthew in 2016 caused the lower Pamlico Sound to emit CO2 for months after the passage of the storm. With similar results documented for the Pamlico Sound for storms in 2011 and 2012, there is solid evidence that shifts in the ecosystem state of this mesotrophic estuary from net autotrophic to net heterotrophic are a major effect of this process.

Reactive DOC from the landscape appears to be driving the shift in ecosystem state.  Large plumes of brown-colored DOC are observable from space in numerous satellite images of the Atlantic and Gulf coasts following these storms. The color is part of a phenomenon known as “coastal darkening"—spectroscopic, stable isotopic, and biomarker evidence show this darkening is related to the flushing of wetlands in the flood-plain adjacent to the rivers draining into these estuaries.

Along the Texas coast, Hurricane Harvey produced the largest rainfall event recorded in US history and caused extensive flooding in 2017. Similar to results from coastal North Carolina, flood-derived terrestrial DOC in Galveston Bay exhibited high bioreactivity, with decay constants exceeding those observed for terrestrial DOC across coastal environments from high and low latitudes by almost three-fold. The rapid processing of terrestrial DOC was linked to an active microbial community capable of decomposing aromatic compounds that are abundant in colored DOC as indicated by genomic analyses. These recent studies clearly demonstrate the impacts of large storm events on coastal carbon cycling via the transport of reactive terrestrial DOC into coastal waters. Climate-driven increases in the frequency and intensity of such storm events warrant more sustained capacity to monitor episodic deliveries of carbon and nutrients and their impacts on coastal marine ecosystems.