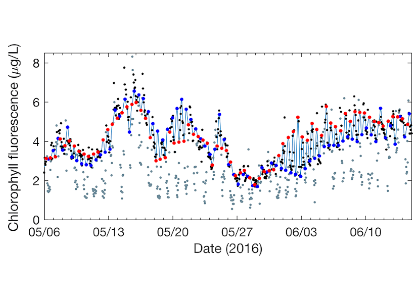 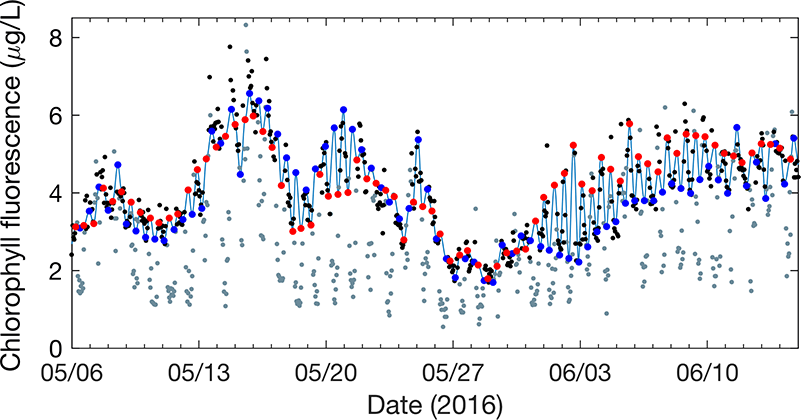 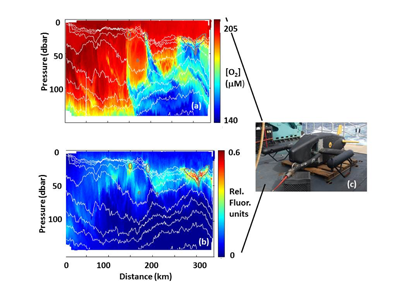 Hotspots of biological production: Submesoscale changes in respiration and production

The biological pump is complex and variable. To better understand it, scientists have often focused on variations in biological parameters such as fluorescence and community structure, and have less often observed variations in rates of production. Production rates can be estimated using oxygen as a tracer, since photosynthesis produces oxygen and respiration consumes it. In a recent article in Deep Sea Research Part I, the authors presented high-resolution maps of oxygen in the upper 140 m of the ocean in the subtropical and tropical Atlantic, produced from a towed undulating instrument. This provides a synoptic, high-resolution view of oxygen anomalies in the surface ocean. These data reveal remarkable hotspots of biological production and respiration co-located with areas of elevated fluorescence. These hotspots are often several kilometers wide (horizontal) and ~10 m long (vertical). They are preferentially associated with edges of eddies, but not all edges sampled contained hotspots. Although this study captures only two-dimensional glimpses of these hotspots, precluding formal calculations of production rates, likely estimates of source water suggest that many of these hotspots may actually be areas of enhanced respiration rather than enhanced photosynthesis. The paper describes a conceptual model of nutrients, new production, respiration, fluorescence, and oxygen during the formation and decline of these hotspots. These data raise intriguing questions–if the hotspots do indeed have substantially different rates of production and respiration than surrounding waters, then they could lead to significant changes in estimates of production in the upper ocean. Additionally, understanding the mechanisms that produce these hotspots could be critical for predicting the effects of climate change on the magnitude of the biological pump. 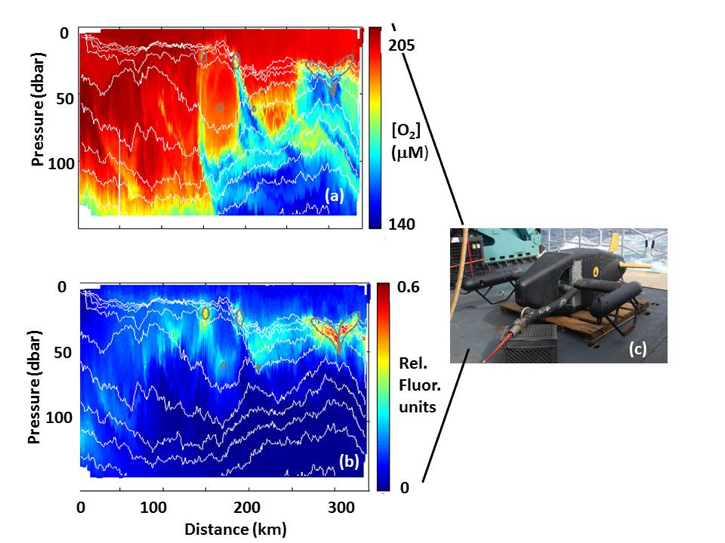 (a) Oxygen concentrations and (b) fluorescence at ~1 km resolution over 300 km from 15.13°N, 57.47°W to 12.30°N, 56.42° W, as measured by sensors attached to the (c) Video Plankton Recorder II. Note that no contouring was used for this plot – every pixel represents an actual data point. Figure modified from Stanley et al., 2017. VPR image photograph by Phil Alatalo.