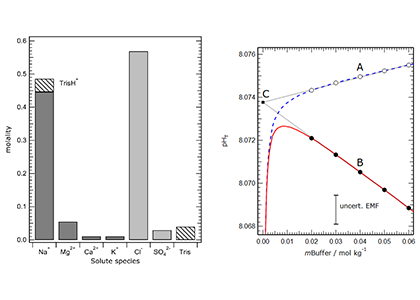 The total pH scale used by oceanographers (for salinities 20 – 40, and temperatures 0 to 45°C) is calibrated from a combination of electromotive force measurements of artificial seawaters containing either added HCl of various molalities, or equimolal Tris and its protonated form TrisH+. In both cases, the added H+ or TrisH+ is substituted for Na+ on a mole-for-mole-basis, so as to change the properties of the artificial seawater medium as little as possible. The artificial seawater itself consists of the major ions of seawater (those present in constant ratios to one another in natural seawater), with substitutions for the inorganic acid-base species present in natural seawater (principally carbonate and borate). Figure 1 shows the composition of a typical Tris buffer. 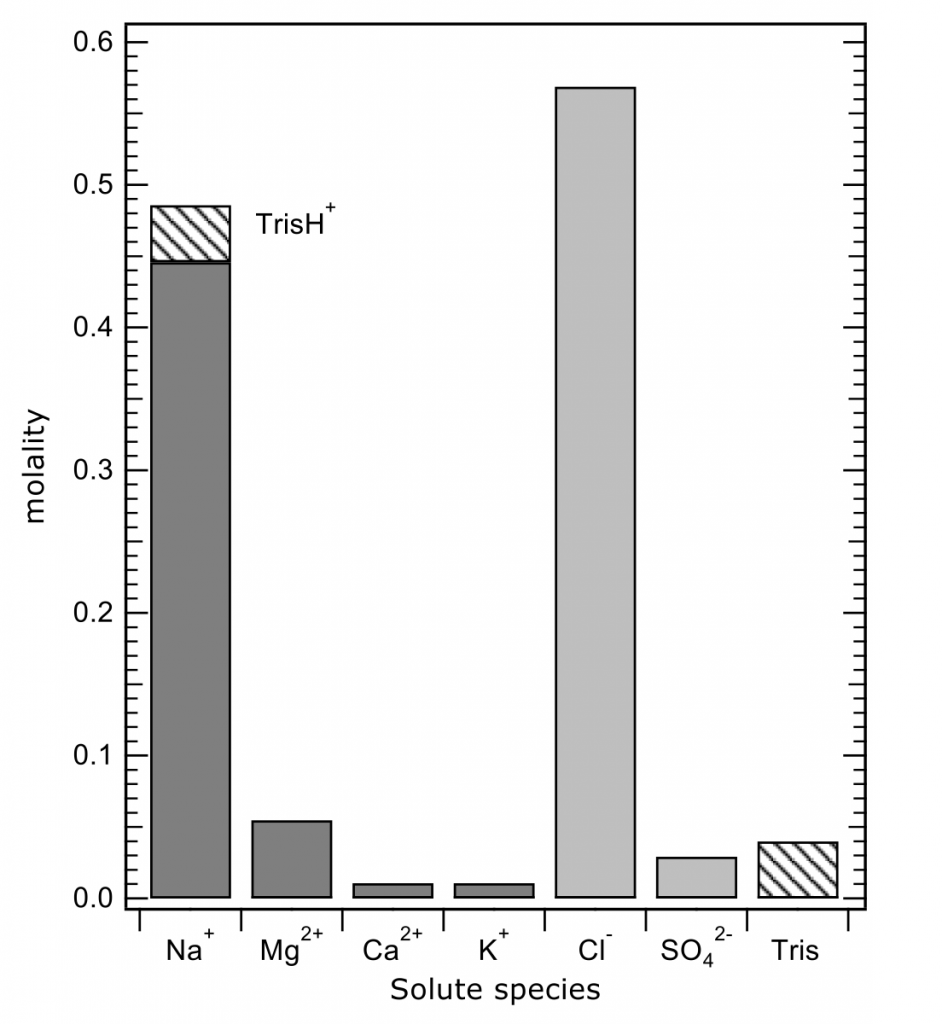 The operational definition of the total pH scale in use today involves a number of assumptions associated with the small differences between pure artificial seawater, and artificial seawater containing the buffer substance. These cannot be determined experimentally. However, a chemical thermodynamic model of the ion activities and concentrations in the buffer solutions can be used to calculate these quantities and to link measured total pH to the conventional thermodynamic total of H+ and HSO4–. Such a model can also address a series of important future applications and uses of the total pH scale:

Figure 2 shows a model simulation of the operationally defined total pH and the conventional thermodynamic sum [H+] + [HSO4–] in a buffer solution of salinity 35. The linear extrapolation to zero buffer molality yields a hypothetical total pH that is used by oceanographers and is shown to be the same for both cases, demonstrating that they are the same. 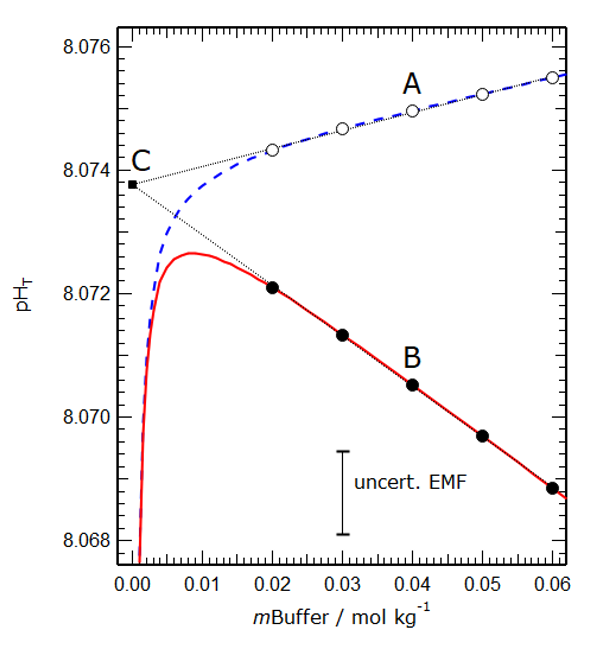 Figure 2. Modelled values of the operational total pH (dashed blue line) and the conventional thermodynamic total pH (solid red line) plotted against buffer molality (mBuffer) for a salinity 35 artificial seawater at 25°C. The fine dotted lines are extrapolations of linear fits to the two groups of points. The vertical distance between marked points A and B (about 0.0045 pH units) represents the effect of differences between the two solutions – hitherto assumed out of necessity to be zero, and here calculated for the first time. The two extrapolations (fine dotted lines) intercept at point C, for which mBuffer is equal to zero and the two definitions are numerically the same.

In these two papers, we describe the development of the model of solutions containing the ions of artificial seawater plus Tris buffer. The models include uncertainty propagation (a first, for models of this type). We assess the needs for further measurements to both improve the accuracy of the model and extend it over the full range of temperatures of interest to oceanographers. We have an ongoing programme of measurements to support this work involving colleagues at the National Institute of Standards and Technology and its equivalents in Germany and Japan. In late 2022, we will be releasing for public use the software that implements two models, and also one of seawater electrolyte. If interested, please contact Heather Benway to be added to our email list, and check the website of SCOR Working Group 145 (marchemspec.org).

Read the papers about the pH buffer and artificial seawater in Marine Chemistry.