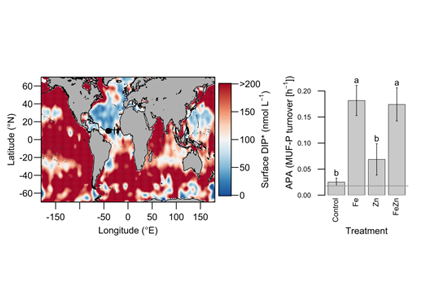 Role for iron in controlling microbial phosphorus acquisition in the ocean

In the subtropical North Atlantic, dissolved inorganic phosphorus (DIP) concentrations are depleted and might co-limit N2 fixation and microbial productivity. There are relatively large pools of dissolved organic phosphorus (DOP), but microbes need an enzyme to access this P source. One such alkaline phosphatase (APase) enzyme requires zinc (Zn) as its activating cofactor. This has been known for almost 30 years. However, recent crystallography studies revealed that two other widespread APase enzymes contain Fe. Via this requirement, Fe availability could regulate microbial access to the DOP pool.

As detailed in a recent publication in Nature Communications (Browning et al. 2017), this hypothesis was tested on a cruise across the tropical North Atlantic by adding Fe and Zn to incubated seawater and monitoring changes in bulk APase using a simple fluorescence assay. Adding Fe significantly increased APase activity in seawater samples collected in areas that were far-removed from coastal and aerosol Fe sources. Despite seawater Zn concentrations being much lower than Fe, it appeared not to be limiting.

DIP is depleted in surface waters of the tropical North Atlantic because inputs of North African aerosol Fe stimulates N2 fixation and leads to microbial drawdown of DIP. If the modern ocean is a good analog for the past, the lack of APase stimulation following experimental Zn addition could reflect limited evolutionary selection for Zn-containing APase. In general, DIP is only substantially depleted where there is enhanced Fe input fueling N2 fixation; it therefore follows that any significant requirement for APases might be restricted to these relatively high-Fe, low-Zn waters.

On a shorter timescale, growing anthropogenic nitrogen input to the ocean relative to phosphorus could result in more prevalent oceanic phosphorus deficiency. Corresponding iron inputs might then serve as an important control on phosphorus availability for microbes in these regions.