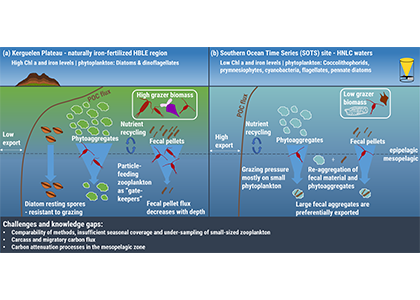 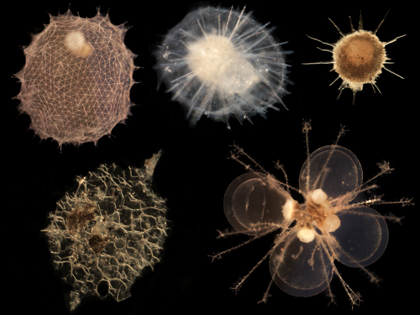 Phaeodaria are single-celled eukaryotes (a.k.a. protists) belonging to the supergroup Rhizaria. Like diatoms, phaeodarians build up skeletons made of opaline silica, but unlike their emblematic relatives, phaeodarians have been largely ignored in the marine silica cycle. 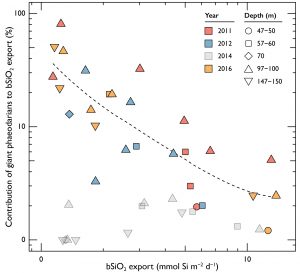 The contribution of phaeodarians to total biogenic silica (bSiO2) export is markedly enhanced at low total bSiO2 export (analysis did not include data from 2014 due to abnormally depleted phaeodarian population).

In a recent study published in Global Biogeochemical Cycles (also see related Research Spotlight in AGU Eos), authors used a combination of extensive sediment trap deployments and in situ imagery during four cruises of the California Current Ecosystem Long-Term Ecological Research (CCE-LTER) Program off the coast of California to quantify biogenic silica export mediated by giant phaeodarians (>600 µm). These data revealed that giant phaeodarians possess among the highest recorded cellular silica content (up to 43 µg Si cell-1). In addition, measurements of vertical fluxes suggest that these organisms can play a surprisingly large role in silica export (ranging from 10-80% of total silica export) in more oligotrophic waters. Also, because they are most abundant in waters below the euphotic zone, phaeodarians contribute to increased biogenic silica flux in the mesopelagic, in contrast with typically observed decreases in carbon flux with depth. Given their significant contribution to silica export, phaeodarians should be considered in global budgets and models of ocean silica cycles, especially in oligotrophic waters.