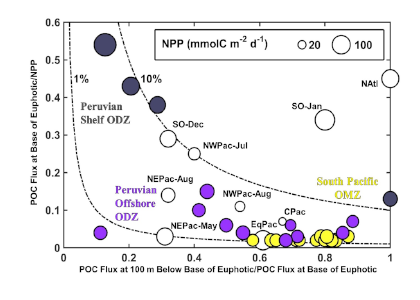 Oxygen minimum zones (OMZs) are thought to be regions of the global ocean where a greater percentage of the organic carbon associated with particles makes it to depth. Currently covering 8% of the world’s ocean area, these low oxygen regions are expected to expand as a result climate change. It is therefore vital to understand if and how OMZs could sequester more carbon via decreased attenuation in the water column. During the U.S. GEOTRACES Southeastern Tropical Pacific campaign along the 12°S line, a study published in Marine Chemistry examined the transport of particulate organic carbon (POC) within the Peruvian OMZ using the well-established 238U-234Th method. This included studying the functionally anoxic core of the OMZ, here referred to as the Peruvian Shelf oxygen deficient zone (ODZ, coast to 80°W) and the Offshore ODZ (80°W to 105°W). 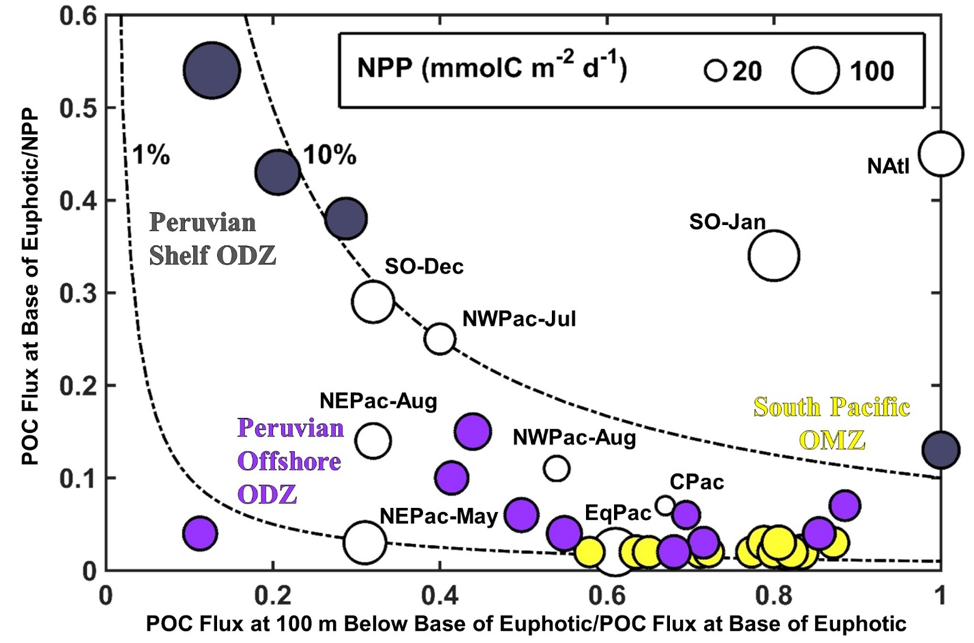 As predicted, the South Pacific OMZ (105°W to 155°W) exported a larger fraction of POC below the productive sunlit upper ocean than what has been observed in non-OMZ waters globally (right side, Figure 1). The ODZ waters, on the other hand, showed a greater attenuation of POC (left side, Figure 1) in this same region of the water column (left side, Figure 1). With decreased POC attenuation observed in the OMZ and increased attenuation in the ODZ, these results suggest that global expansion of low-oxygen waters may have a more complex effect on regional carbon sequestration than predicted. Simultaneous observations of low light transmission, nitrate minima, nitrite maxima, and deep secondary chlorophyll maxima in these ODZ regions suggest that complex bacterial community dynamics play a role in increased attenuation through these zones. With ODZs and OMZs predicted to grow worldwide with climate change, these areas require further large-scale and seasonal studies to assess the permanency of these attenuation features and the impact of high Gyre and lower ODZ transfer of POC on the overall efficiency of carbon export in the Pacific.