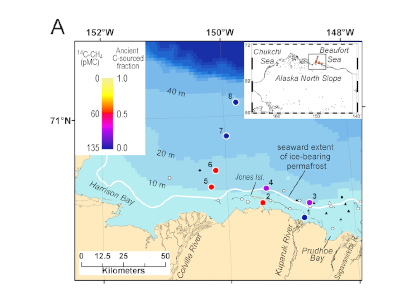 Gas hydrates are an ice-like storehouse of the greenhouse gas methane found in continental margins of the world ocean. Warming waters can cause hydrates to decompose and release ancient methane to overlying sediment and waters. The continental shelves of the Arctic Ocean have been thought of as “ground zero” for the potential release of methane from hydrates, since the Arctic is warming rapidly and hydrates are found at relatively shallow water depths there. Another potential ancient methane input to Arctic shelf waters is the methane produced by microorganisms from the gradual thawing of permafrost carbon within seafloor sediment and/or transported to the shelf from terrestrial permafrost via rivers. But, can large stores of ancient-sourced methane reach surface waters and enter the atmosphere, contributing to greenhouse warming? 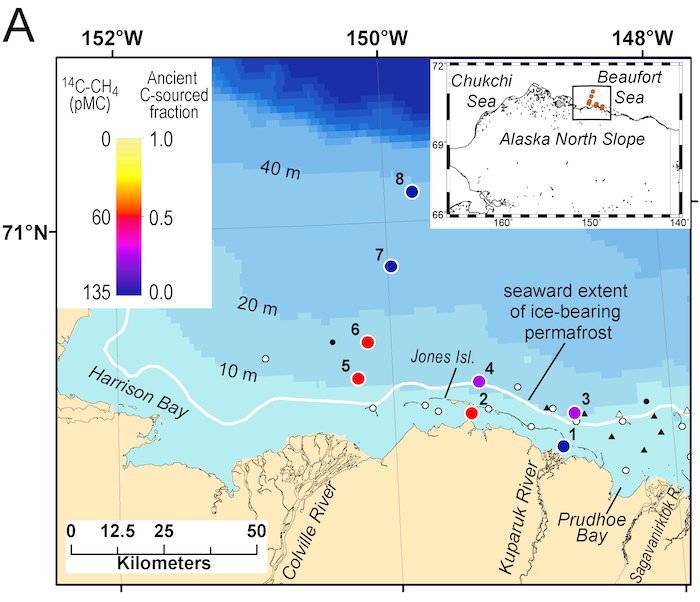 Figure caption: Map showing the fraction of methane in each surface water sample that was derived from ancient hydrate or permafrost, on a scale from 0 (modern, 0% ancient; indigo) to 1 (100% ancient; yellow). While some of the near-shore surface methane samples have a significant (~50%) ancient component, in waters deeper than 20 m, the surface water methane was mostly (90-95%) derived from modern sources.

To answer this question and understand the role of these ancient sources of methane (hydrates and permafrost), the authors of a 2018 study in Science Advances measured the natural abundance of radiocarbon (14C) in dissolved methane in the shallow shelf waters of the Alaskan Arctic Ocean (U.S. Beaufort Sea); methane derived from ancient sources has little to no measurable 14C because of radioactive decay over time. The 14C-methane results show that ancient sources are contributing methane to the study area’s waters, as the authors predicted. However, ancient methane emitted to seawater can be consumed by microorganisms or transported away by currents before reaching the atmosphere, though these mechanisms have not been known to be effective at removing methane in waters <100 m. This study revealed that these removal processes are surprisingly efficient in shallow shelf waters, especially at the study area’s deepest stations of 30 and 40 m depth, where only ~10% of the methane in surface waters was derived from ancient sources. These results add to a growing body of evidence against the likelihood of a large methane emission to the atmosphere occurring from ancient sources like hydrates, since the authors expect that methane removal processes in the water column are much more efficient in waters 100s of meters deep, where the bulk of the hydrate reservoir resides.