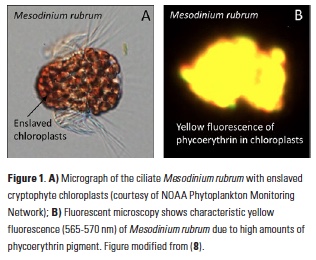 Blooms of red water associated with the remarkable ciliate Mesodinium rubrum have been observed at least since Darwin’s time (1). This ciliate retains the chloroplasts from ingested prey and is able to use them for photosynthesis (reviewed in 2). Recent studies have shown that the plastids can reproduce within the ciliate and that nuclei from the original algal prey remain
transcriptionally active (3). It is very likely that there are at least two different species of Mesodinium that perform this feat, the original M. rubrum and a recently described larger species, M. major (4). Both species have in common certain species of cryptophyte
algae as their preferred food, and hence are colored deep red by their prey’s phycoerythrin pigment and characteristic yellow fluorescence (Fig. 1). Mesodinium is believed to hold the ciliate swimming speed record, with short jumps of up to 1.2 cm s-1, and can change its position vertically in the water column to access nutrients (5). Along with rapid growth, its impressive motility probably contributes to the large aggregations obvious to the naked eye, in which concentrations of >106 cells l-1 have been observed (6 ) (Fig. 1). Even outside of bloom conditions, they are a regular component of estuarine and coastal plankton assemblages and can contribute significantly to primary productivity (7). However, as mixotrophs (organisms capable
of both photosynthesis and ingestion), they are undersampled and underappreciated by phytoplankton and zooplankton ecologists alike.

Red water has been reported in Long Island Sound on occasion by other observers. While Mesodinium was present in >80% of all samples examined in >10 years of monthly plankton monitoring data, no sample ever exceeded 2.6 x 104 cells l-1. In Fall 2012, Univ. Connecticut personnel servicing a moored array observed and sampled red water in western Long Island Sound (40.9°N 73.6°W). Microscopy and DNA sequencing confirmed that the bloom was due to Mesodinium (100% identical by small subunit rDNA to the larger M. major), and we subsequently reported on our efforts to document the bloom using satellite imagery (8). Here, we summarize those results and discuss the promise of new sensors for quantifying blooms of specific plankton groups by their pigment signatures, especially when coarsely resolved monitoring samples are inadequate. 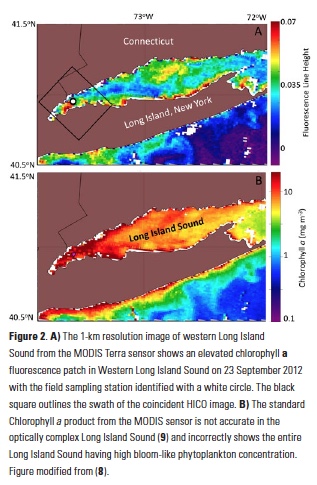 Ocean color satellites provide a means to assess such red tides, but the standard chlorophyll products are inaccurate in the optically complex waters of Long Island Sound, which contain river runoff with colored dissolved organic matter (cDOM) and suspended sediments (9, 10) (Fig 2). Imagery from the MODIS sensor of fluorescence line height (Fig. 2A) indicated the presence of an unspecified bloom in Western Long Island Sound coincident with the bloom, but the spatial resolution (1-km pixels) did not allow us to gauge the bloom extent adequately, and the spectral bands of that sensor are not sufficient to discriminate the type of bloom.

Serendipitously, an image was available for the western Sound from the novel Hyperspectral Imager for the Coastal Ocean (HICO) instrument aboard the International Space Station. This sensor contains >100 channels in the visible and near infrared regions of the spectrum and hence has the capability to resolve multiple peaks and valleys due to fluorescence and absorbance of the chlorophylls and accessory pigments found in various phytoplankton groups. It also has the higher spatial resolution (110-m pixels) needed to quantify the extent of the bloom and variation in ciliate abundance within it. Because the red water we observed appeared (microscopically) to be almost exclusively due to Mesodinium, the HICO reflectance spectrum was an almost pure example of the in situ optical signature of this unique organism (i.e. an “endmember” in remote sensing terminology). 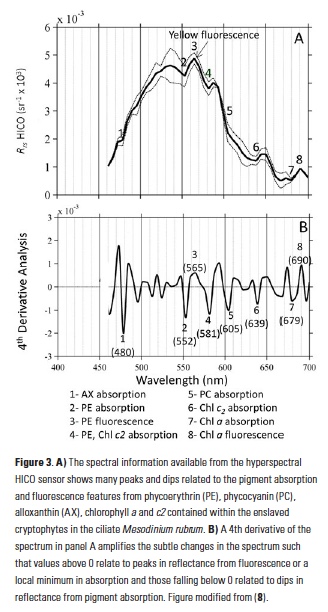 In addition to phycoerythrin, the cryptophyte chloroplasts that the ciliate retains contain chlorophyll-a, chlorophyll-c2, phycocyanin, and the carotenoid alloxanthin. The reflectance spectrum measured with the HICO sensor revealed features related to the fluorescence and absorption associated with these pigments that can be used as a spectral “fingerprint” of this specific organism (Fig. 3A). With reflectance measured across the full visible spectrum, small dips in the spectrum can be revealed with a 4th derivative analysis and related to the associated pigments (11) (Fig. 3B). In addition to absorbing green light, phycoerythrin also fluoresces yellow light (12) (Fig. 1B) and a peak in reflectance was observed at ~565 nm associated with this feature. This unique fluorescence feature allowed us to map the surface distribution of Mesodinium in Long Island Sound. Traditional ocean color satellites do not measure reflectance of light at this waveband, but yellow fluorescence (band depth at 565 nm) could be detected from the hyperspectral measurements of HICO and related to the relative amount of Mesodinium up to the measured 106 cells L-1 with distinctly red colored water (Fig. 4). 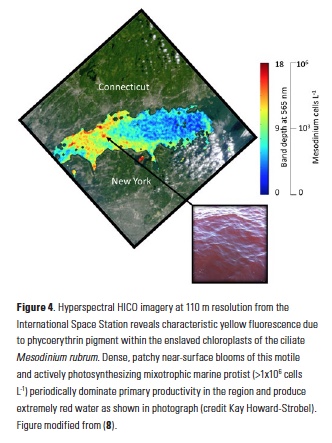 The fine-scale distribution of the HICO imagery reveals that Mesodinium was found in small 100-m patches along the sea surface rather than distributed throughout a single multi-kilometer patch as suggested by the 1-km MODIS imagery (Fig 2A). Such high spatial resolution from aircraft has been used to assess concentration mechanisms of blooms, including internal waves (13) and Langmuir circulation (14). Further research is underway to assess the observed patterns with hydrographic and air-sea processes local to this region. Understanding the spatial distribution may also lead to a better understanding of the environmental factors that lead to these episodic blooms of Mesodinium. Generally, Mesodinium is more abundant in lower salinity estuarine water, but the causes of bloom initiation and demise are not well known (15).

Though now defunct, the HICO sensor should serve as a model for remote sensing in the coastal zone. With its high spectral and spatial resolution, images from HICO could be used to assess coastal processes, as highlighted here, but only at infrequent intervals. While possible with airborne technology, no existing or planned satellite sensor can sample at high spectral, spatial, and temporal resolution for adequate monitoring of the coastal zone. Providing near-daily coverage for much of the globe, the next generation NASA ocean color sensor, Pre-Aerosol, Cloud and ocean Ecosystems (PACE), is slated to have the unique hyperspectral capabilities to allow for better discrimination of marine blooms and habitats, but with a larger km-scale resolution. International sensors with new capabilities will also help to fill this gap (16). With new hyperspectral technology in space, autonomous and routine differentiation of phyto- and mixotrophic plankton blooms in surface waters may be possible and could provide an important tool for resource managers. Improved monitoring of bloom-forming plankton will also lead to more refined estimates of coastal primary productivity and mechanisms for their episodic growth and decline. If future sensors or sensor constellations combine high repeat sampling with the hyperspectral capabilities and high spatial resolution of HICO, we will be able to understand not only the composition and extent of blooms, but also the sub-mesoscale processes that drive their persistence and spatial structure.

We thank Kay Howard-Strobel, Senjie Lin, and the NOAA Phytoplankton Monitoring Network for images of the bloom and of Mesodinium. Dajun Qiu verified the genetic identity of the ciliate. Adam Chlus and Bo-Cai Gao contributed to the image processing. We also thank the HICO Science Team and NASA Ocean Biology Distributed Active Archive Center for providing satellite imagery.