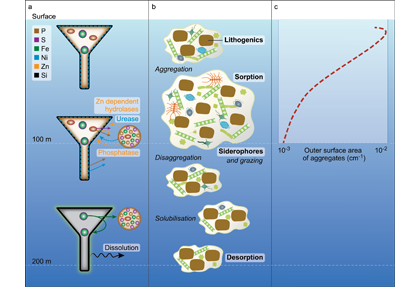 The extent to which the return of major and minor elements to the dissolved phase in the deep ocean (termed remineralization) is decoupled plays a major role in setting patterns of nutrient limitation in the global ocean. It is well established that major elements such as phosphorus, silicon, and carbon are released at different rates from sinking particles, with major implications for nutrient recycling. Is this also the case for trace metals?

A recent publication by Boyd et al. in Nature Geoscience provides new insights into the biotic and abiotic processes that drive remineralization of metals in the ocean.  Particle composition changes rapidly with depth with both physical (disaggregation) and biogeochemical (grazing; desorption) processes leading to a marked decrease in the total surface area of the particle population. The proportion of lithogenic metals in sinking particles also appears to increase with depth, as the biogenic metals may be more labile and hence more readily removed.

Findings from GEOTRACES process studies revealed that release rates for trace elements such as iron, nickel, and zinc vary from each other. Microbes play a key role in determining the turnover rates for nutrients and trace elements. Decoupling of trace metal recycling in the surface ocean and below may result from their preferential removal by microbes to satisfy their nutritional requirements. In addition, the chemistry operating on particle surfaces plays a pivotal role in determining the specific fates of each trace metal. Teasing apart these factors will take time, as there is a complex interplay between chemical and biological processes. Improving our understanding is crucial, as these processes are not currently well represented by state-of-the-art ocean biogeochemical models. Figure caption: Rapid changes in the characteristics of sinking particles over the upper 200 m as evidenced by: a) differential release of trace metals from sinking diatoms; b) changes in proportion of lithogenic versus biogenic materials; and c) ten-fold decrease in total particle surface area.

Joint workshop with GEOTRACES in August 2016: Biogeochemical Cycling of Trace Elements within the Ocean