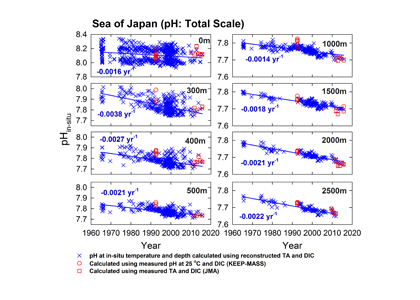 Oceans worldwide are warming up, and thermohaline circulation is expected to slow down. At the same time, ocean acidity is increasing due to the influx of anthropogenic carbon dioxide (CO2) from the atmosphere, a phenomenon called ocean acidification that has primarily been documented in shallow waters. In general, deeper waters contain less anthropogenic CO2, but predicted reductions in ventilation of deep waters may impact deep ocean chemistry, as described in a recent study in Nature Climate Change. 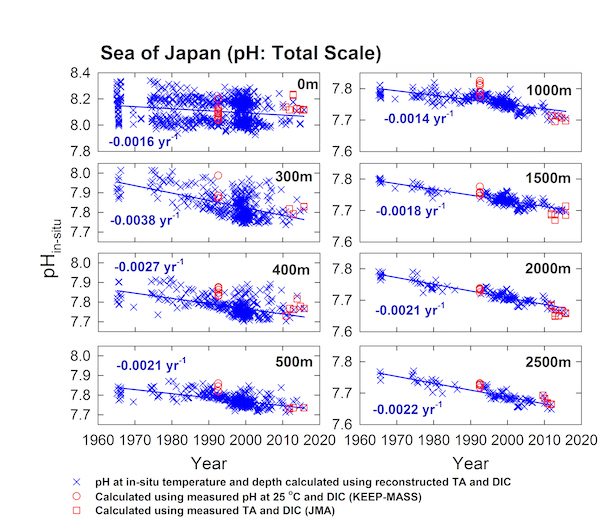 Figure caption: Secular trend of total scale pH at in-situ temperature and pressure at various depths between 1965 and 2015 in the Sea of Japan.

The Sea of Japan is a marginal sea with its own deep- and bottom-water formation that maintains relatively elevated oxygen levels. However, time-series data from 1965-2015 (the longest time-series available) reveal that oxygen concentrations in these deep waters are declining, indicating a reduction in ventilation that increases their residence time. As organic matter decomposition in these waters continues to accumulate more CO2, the pH decreases. As a result, the acidification rate near the bottom of the Sea of Japan is 27% higher than at the surface. As a miniature ocean with its own deep- and bottom-water formation, the Sea of Japan provides insight into how future warming might alter deep-ocean ventilation and chemistry.