If you would like to have your recent publications featured on the OCB website and eNewsletter please contact ocb_news@whoi.edu. View our guidelines for writing a OCB Science Highlight. 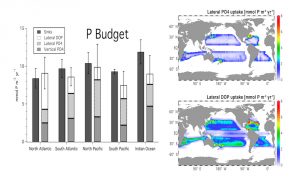 Vertical processes are thought to dominate nutrient resupply across the ocean, however estimated vertical fluxes are insufficient to sustain observed net productivity in the thermally stratified subtropical gyres. A recent study by Letscher et al. (2016) published in Nature Geoscience used a global biogeochemical ocean model to quantify the importance of lateral transport and biological […] 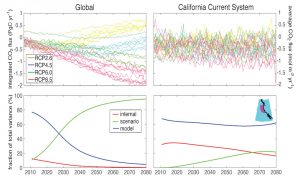 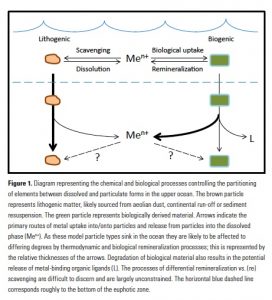 1. Stoichiometry of metals in the ocean The close relationship between the stoichiometry of nutrients dissolved in the upper ocean and the planktonic organisms that grow in these waters has long been recognized (1, 2). The stoichiometry of 106 C:16 N:1 P first summarized by Redfield has become a fundamental concept of marine biogeochemistry, with numerous studies using the ratio as […]

Marine particles: Distribution, composition, and role in scavenging of TEIs

GEOTRACES and particles in the ocean GEOTRACES is an international program to study the global marine biogeochemical cycles of trace elements and their isotopes (TEIs). The program’s guiding mission is to “identify processes and quantify fluxes that control the distributions of key TEIs in the ocean” (1). Particles represent a key parameter for the GEOTRACES program because of their role […]

We rely on global ocean models to predict how climate change might affect the evolution of ocean productivity, acidification, and deoxygenation (1). Such platforms are also used to test hypotheses regarding the controls on ocean biogeochemical cycling and to understand past change (both on historical and geologic timescales). Ocean biogeochemistry models began with relatively simple formulations of a carbon export flux […] 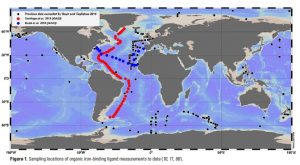 Iron is a limiting nutrient for phytoplankton in nearly half of the global surface ocean, and much attention has been paid to the biogeochemical cycling of iron in seawater since suitable trace metal-clean sampling and analysis procedures were developed (1). The organic complexation of dissolved iron, in particular, has emerged as an inherent feature of iron chemistry in the oceans (2-5), […] 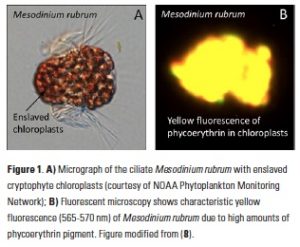 Blooms of red water associated with the remarkable ciliate Mesodinium rubrum have been observed at least since Darwin’s time (1). This ciliate retains the chloroplasts from ingested prey and is able to use them for photosynthesis (reviewed in 2). Recent studies have shown that the plastids can reproduce within the ciliate and that nuclei from […]

The newest generation of satellites reveals plankton variability changes in character from uniform to chaotic at different spatial scales, reviving a classic question in oceanography. How does plankton variability change at different spatial scales, and why? New satellites, new insights Satellite technologies can now collect images with resolution down to the scale of meters, presenting […]