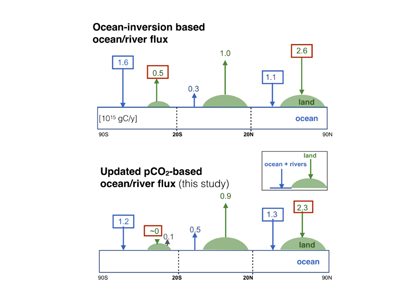 Studies over the past 25 years have supported the existence of a large net land biosphere CO2 sink of 0.5–2 PgC yr-1. Significant uncertainties remain, however, regarding the long-term partitioning between northern, tropical, and southern land sinks, in part connected to the uncertain ocean carbon sink. These uncertainties limit our capacity to predict earth system response to anthropogenic changes and design effective mitigation strategies. 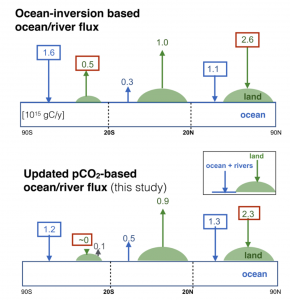 In a recent study published in Nature Geoscience, Resplandy et al. (2018) used models and field observations to demonstrate that the world’s oceans transport heat between the northern and southern hemispheres in the same way that carbon is transported. The transport of heat, however, is easier to observe. By tracking this heat, they showed that the Southern Ocean — while still a substantial carbon sink —may not take up as much carbon as previously thought, and that ocean currents might transport 20 to 100% more carbon from the northern to the southern hemisphere. To maintain this additional transport of carbon, they showed that the amount of carbon entering the ocean from rivers may be as much as 70% higher than estimated in previous global carbon budget studies. These changes in the ocean and river carbon transport imply that up to 40% of the world’s atmospheric carbon absorbed by land ecosystems needs to be reallocated from existing estimates.