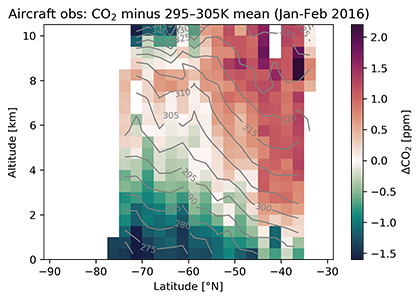 The Southern Ocean is indeed a significant carbon sink—absorbing a large amount of the excess carbon dioxide emitted into the atmosphere by human activities—according to a newly published study led by the National Center for Atmospheric Research (NCAR).

The findings provide clarity about the role the icy waters surrounding Antarctica play in buffering the impact of increasing greenhouse gas emissions, after research published in recent years suggested the Southern Ocean might be less of a sink than previously thought. The authors makes use of observations from research aircraft flown during three field projects over nearly a decade, as well as a collection of atmospheric models, to determine that the Southern Ocean takes up significantly more carbon than it releases.

You can’t fool the atmosphere. While measurements taken from the ocean surface and from land are important, they are too sparse to provide a reliable picture of air-sea carbon flux. The atmosphere, however, can integrate fluxes over large expanses. Airborne measurements reveal critical patterns in the global carbon cycle, a drawdown of CO2 in the lower atmosphere over the Southern Ocean surface in summer, indicating carbon uptake by the ocean.