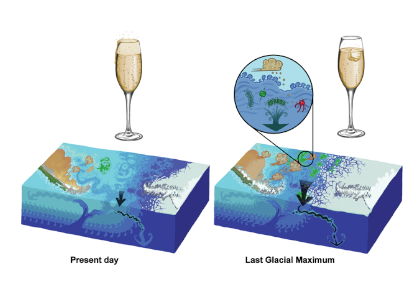 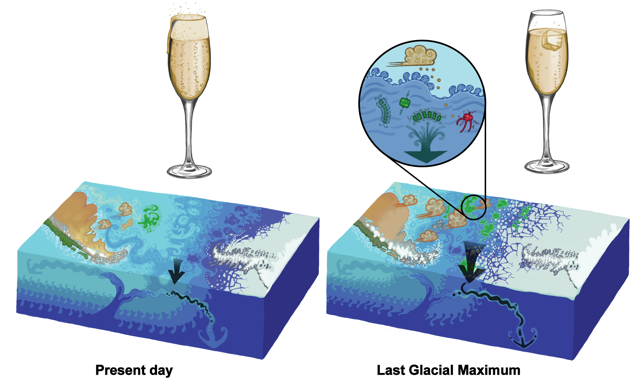 Figure: Illustration of the two main mechanisms identified by this study to explain lower atmospheric CO2 during glacial periods. Left: present-day conditions; right: conditions around 19,000 years ago during the Last Glacial Maximum. The obvious explanation for lower CO2 during glacial periods – cooler ocean temperatures (darker blue shade) making CO2 more soluble, much as a glass of sparkling wine will remain fizzier for longer when it is colder – has long been dismissed as not being a significant factor. However, previous calculations assumed that the ocean cooled uniformly and was saturated in dissolved CO2. The model, consistent with reconstructions of sea surface temperature, predicts more cooling at mid latitudes compared with polar regions and also accounts for undersaturation. This nearly doubles the effect of temperature change and accounts for almost half the 90 ppm glacial-interglacial atmospheric CO2 difference. Another quarter is explained in this model by increased growth of marine algae (green blobs and inset) in the waters off Antarctica. Algae absorb CO2 from the atmosphere during photosynthesis and “pump” it into the deep ocean when they die and sink. But their growth in the present-day ocean, especially the waters off Antarctica, is limited by the availability of iron, an essential micronutrient primarily supplied by wind-borne dust. In our model an increased supply of iron to the Southern Ocean, likely originating from Patagonia, Australia and New Zealand, enhances their growth and sucks CO2 out of the atmosphere. This “fertilization” effect was greatly underestimated by previous studies. The study also finds that, contrary to the current consensus, a large expansion of sea ice off Antarctica and reconfiguration of ocean circulation may have played only a minor role in glacial-interglacial CO2 changes. Credit: Illustration by Andrew Orkney, University of Oxford.

Using an observationally constrained earth system model, S. Khatiwala and co-workers compare different processes that could lead to the 90-ppm glacial atmospheric CO2 drawdown, with an important improvement on the deep carbon storage quantification (i.e. Biological Carbon Pump efficiency). They demonstrate that circulation and sea ice changes had only a modest net effect on glacial ocean carbon storage and atmospheric CO2, whereas temperature and iron input effects were more important than previously thought due to their effects on disequilibrium carbon storage.