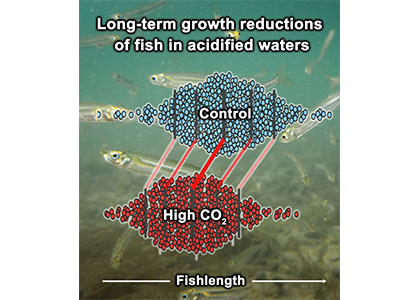 The question of whether ocean acidification (OA) will impact the growth of marine fish remains surprisingly uncertain. The bulk of available evidence in the form of laboratory experiments suggests that most fish are not impacted by OA-relevant CO2 levels, but many studies suffer from the inherent methodical constraints of rearing marine fish in captivity. For example, most experiments cover a small fraction of a species’ lifespan and do not employ restricted feeding regimes which may enable fish to increase feeding to offset metabolic deficits associated with high-CO2 acclimation.

To address these methodological shortcomings, authors of a recent publication in PLOS One synthesized three years of multiple long-term, food-controlled experiments that reared large populations of the model forage fish Menidia menidia (Atlantic silverside) from fertilization to about a third of their lifespan. Results showed modest but consistent negative, temperature-dependent growth effects, in which silversides from high-CO2 treatments were shorter (-3% to -9%) and weighed less (-6% to -18%) than ambient-CO2 conspecifics. However, sometimes it takes more than just looking at means and standard deviations to elucidate these effects. Hence, the authors employed powerful shift functions to analyze how the size distributions of experimental populations shifted to smaller quantiles under future CO2 conditions. 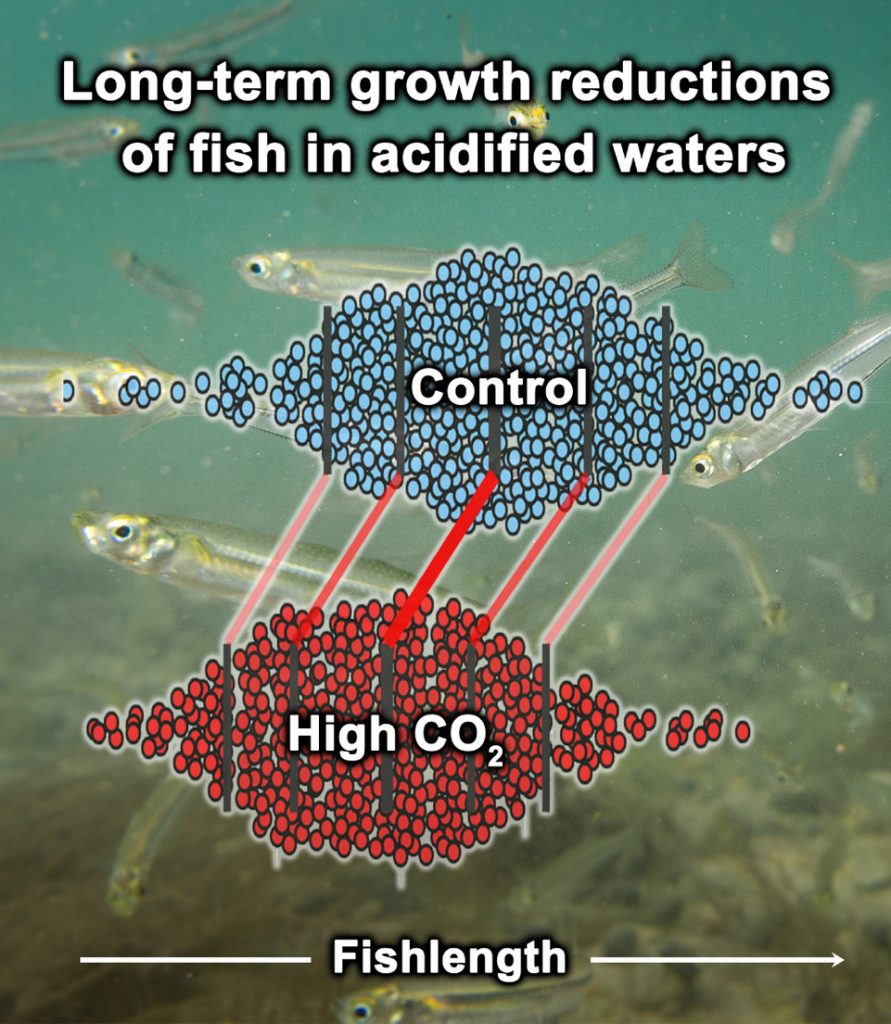 Figure caption: The length of juvenile Atlantic silversides reared from fertilization under control (blue dots) and high-CO2 treatments (red dots). Exposure to OA conditions imposed a universal shift to a smaller body size across the size frequency distribution. Black vertical bars overlaying each distribution indicate the .1, .25, .5, .75, and .9 quantiles and quantile shifts are indicated by connecting lines.

It took over 100 days of continuous high-CO2 exposure until size differences were detectable. This means that long-term CO2 effects could exist in other tested species but are missed in relatively short experiments. Furthermore, the authors sexed several thousand fish to enable a rare sex-specific analysis of CO2 effects. Both sexes were similarly affected by high CO2, and the hormonal pathways that mediate environmental sex determination in this species are not impacted by CO2 level. Our results confirm that Atlantic silversides are relatively tolerant of future OA conditions. But even in this robust estuarine species, high CO2 can reduce growth. This could have cascading effects on population dynamics by impacting size-dependent traits like reproductive success and over-wintering survival of this widespread and ecologically important prey species.