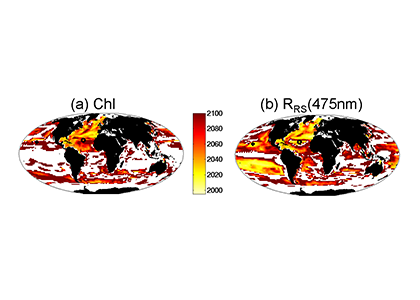 Marine phytoplankton form the foundation of the marine food web and play a crucial role in the earth’s carbon cycle. Typically, satellite-derived Chlorophyll a (Chl a) is used to evaluate trends in phytoplankton. However, it may be many decades (or longer) before we see a statistically significant signature of climate change in Chl a due to its inherently large natural variability. In a recent study in Nature Communications, authors explored how other metrics, in particular the color of the ocean, may show earlier and stronger signals of climate change at the base of the marine food web.

Figure 1. Computer model results indicating the year in which the signature of climate change impact is larger than the natural variability for (a) Chl a, and (b) remotely sensed reflectance in the blue-green waveband. White areas indicate where there is not a statistically significant change by 2100, or for regions that are currently ice-covered.

In this study, the authors use a unique marine physical-biogeochemical and ecosystem model that also captures how light penetrates the ocean and is reflected upward. The model shows that over the course of the 21st century, remote sensing reflectance (RRS, the ratio of upwelling radiance to the downwelling irradiance at the ocean’s surface) in the blue-green portions of the light spectrum is likely to have an earlier, more spatially extensive climate change-driven signal than Chl a (Figure 1). This is because RRS integrates not only changes to Chl a, but also alterations in other optically important water constituents. In particular, RRS also captures changes in phytoplankton community structure, which strongly affects ocean optics and is likely to be altered over the 21st century. Monitoring the response of marine phytoplankton to climate change is important for predicting changes at higher trophic levels, including commercial fisheries. Our study emphasizes the importance of 1) maintaining ocean color sensor compatibility and long-term stability, particularly in the blue-green wavebands; 2) maintaining long-term in situ time-series of plankton communities – e.g., the Continuous Plankton Recorder survey and repeat stations (e.g., HOT, BATS); and 3) reducing uncertainties in satellite-derived phytoplankton community structure estimates.