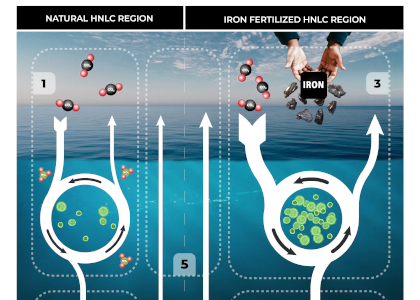 Amidst little to no substantive global action on climate change mitigation, individuals and companies have been exploring various geoengineering strategies as a possible alternative. Ocean Iron Fertilization (OIF) is an ocean-based strategy that involves the addition of iron to the sunlit upper layers of the ocean in iron-limited areas such as the Southern Ocean in order to stimulate marine phytoplankton growth and increase drawdown of carbon dioxide. Authors of a recent technology review in the Journal of Science Policy & Governance argue that a market-based approach to Southern Ocean iron fertilization is not advisable, but recommends continued research into the matter. 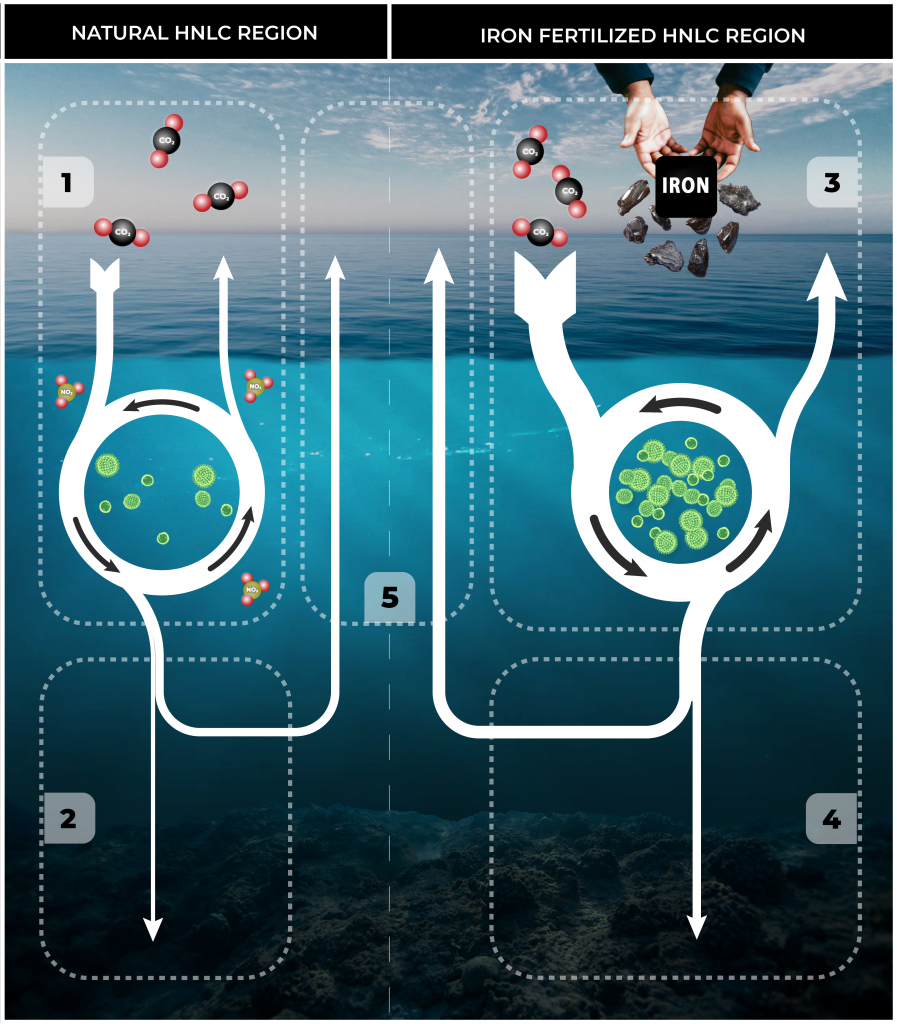 Figure 1: Idealized schematic of carbon cycling and the biological in a natural High Nutrient Low Chlorophyll Region (HNLC) and an iron fertilized HLNC. White arrows represent carbon transport. The addition of iron may dramatically increase surface biomass but only a small fraction of that is additional sequestered in the deep ocean or the sea floor.

This study begins by asking whether or not fertilizing the Southern Ocean could actually create a sustainable carbon sink. A comprehensive literature review revealed that while iron fertilization almost certainly will stimulate new primary production, what is much less clear is how much of that carbon will sink out of the surface ocean and be sequestered long-term. Given the scientific uncertainty, it would be ill-advised to commercialize iron fertilization in emerging carbon offset markets. In addition to concerns about the fundamental feasibility and potential adverse side effect of fertilization, the study argues that any market framework would be corrupted by perverse incentives created by the inability to establish reliable baselines or to accurately and comprehensively document and quantify the effects of fertilization, thus making it impossible to provide fair and consistent compensation. Nevertheless, recent history shows that fertilization activity on unregulated voluntary offset markets motivated by the promise of an easy fix can and will continue to emerge. This study concludes that continued research is needed to constrain the public perception and clarify the reality of an iron bullet.

Author:
Tyler Rohr (MIT/WHOI, currently at US Department of Energy)