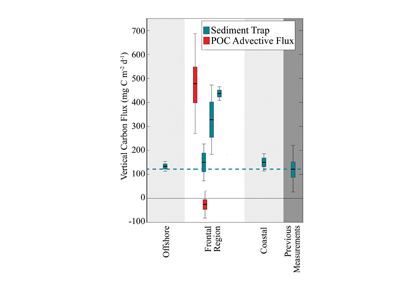 Mesoscale fronts are regions with potentially enhanced nutrient fluxes, phytoplankton production and biomass, and aggregation of mesozooplankton and higher trophic levels. However, the role of these features in transporting organic carbon to depth and hence sequestering CO2 from the atmosphere has not previously been determined. Working with the California Current Ecosystem Long Term Ecological Research (CCE LTER) program, we determined that the flux of sinking particles at a stable front off the coast of California was twice as high as similar fluxes on either side of the front, or in typical non-frontal waters of the CCE in a recent study by Stukel et al. (2017) published in Proceedings of the National Academy of Sciences. This increased export flux was tied to enhanced silica-ballasting by Fe-stressed diatoms and to an abundance of mesozooplankton grazers. Furthermore, downward transport of particulate organic carbon by subduction at the front led to additional carbon export that was similar in magnitude to sinking flux, suggesting that these fronts (which are a common feature in productive eastern boundary upwelling systems) are an important conduit for carbon sequestration. These enhanced carbon export mechanisms at episodic and mesoscale features need to be included in future biogeochemical forecast models to understand how a changing climate will affect marine CO2 uptake.