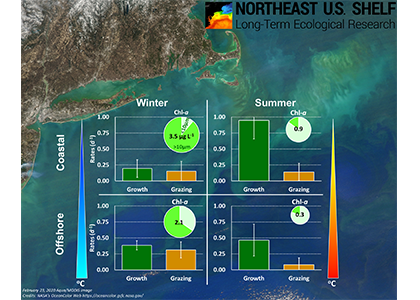 Who’s eating whom in the planktonic food web of the Northeast Shelf?

It is critical to quantify the amount of phytoplankton that microzooplankton consume to better understand the flow of carbon toward higher trophic levels in the ocean. The Northeast US Shelf (NES) sustains intense fisheries with huge economical importance, but the links between the planktonic food web and the fish stocks are poorly constrained.

A recent study, which is part of the NES-LTER site (NES Long-Term Ecological Research, est. 2017), quantified phytoplankton growth rates and microzooplankton grazing rates across the NES during one summer and two winter cruises. The strong seasonal differences of physical and biogeochemical properties, associated with their intense spatial heterogeneity along the shelf, provided a unique opportunity to investigate the planktonic food web dynamics across contrasting environmental conditions. 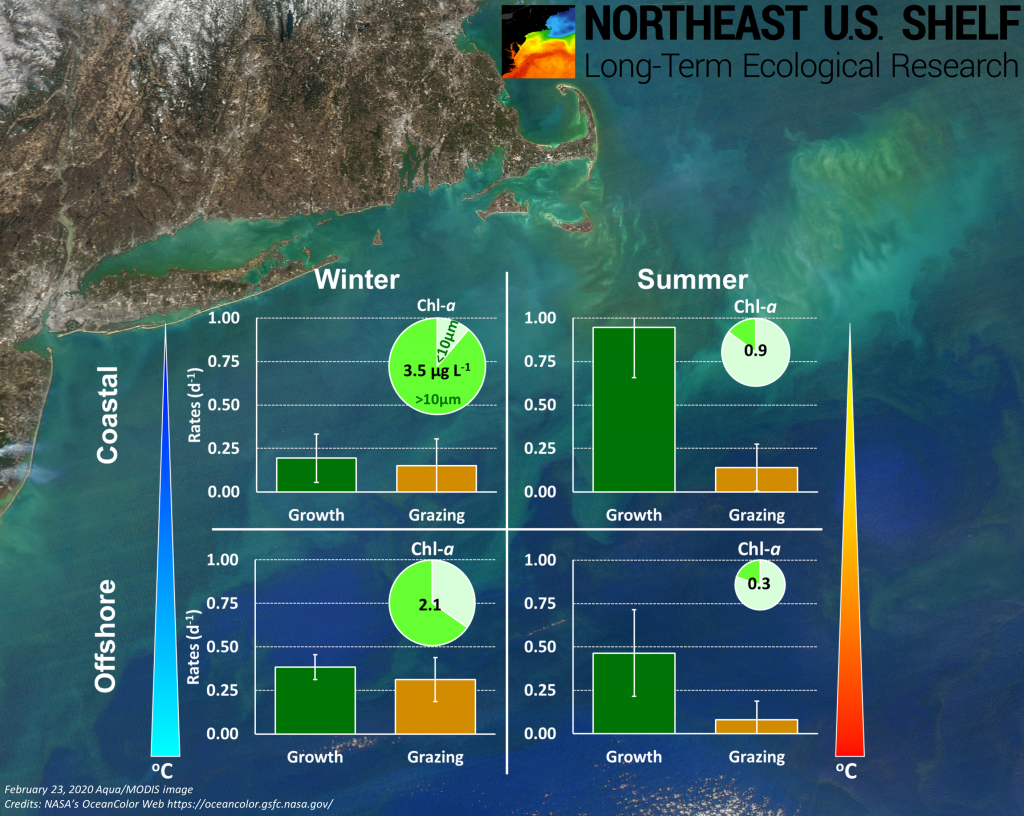 Seasonal (winter vs. summer) and spatial (coastal vs. offshore) variability of the phytoplankton community structure, phytoplankton growth rates and microzooplankton grazing rates in the Northeast US Shelf.

During both winter and summer, coastal waters, which originate in the Arctic, were colder and fresher, and hosted greater phytoplankton biomass compared to the offshore warm slope-sea waters of the Gulf Stream (Figure 1). In winter the phytoplankton community was dominated by large cells (>10 µm), and most of the primary production was directly consumed by microzooplankton, allowing direct and efficient transfer of carbon to higher trophic levels (Figure 1). In contrast, small phytoplankton cells dominated in summer, when fast growing phytoplankton were not preyed upon by microzooplankton grazers, limiting their role conducting organic matter, yet the lack of phytoplankton accumulation during summer suggests some unidentified loss processes and more complex trophic interactions (e.g., trophic cascades, mixotrophy).

The ongoing NES-LTER project is an outstanding opportunity to investigate the flow of carbon amongst the planktonic food web for a predictive understanding of ecosystem productivity in a changing coastal ocean.