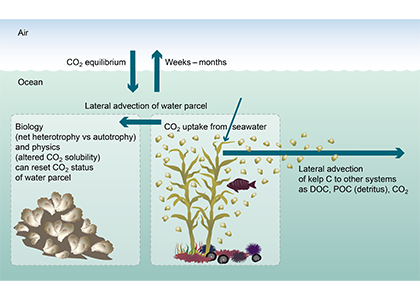 Terrestrial forests are well known as major carbon stores and are already used in carbon credit and offset schemes. In the coastal zone, seaweeds have a similar functional role to trees (carbon dioxide fixation, primary production) and on this basis are being promoted for use as carbon offsets. However, compared to terrestrial forests in which CO2 is taken up directly from the atmosphere and can be readily accounted for in long-lived biomass (wood, roots), accrediting carbon sequestration to seaweeds is extremely complex. This is because:

1) Seaweeds do not store carbon as living biomass on time scales relevant to sequestration (> 100 years) because individuals and seaweed beds have a rapid turnover time (< 10 years).

2) Most seaweed production is consumed within the system (herbivory) or transported laterally out of the system as dissolved organic carbon, particulate organic carbon, or CO2. Tracking the fate and storage of seaweed carbon has not been quantified to date.

3) Seaweeds take up CO2 from surrounding seawater on time scales of seconds, but the re-equilibration of atmospheric CO2 into surface waters occurs on time scales of weeks (coastal ocean) to years (open ocean). Hence, timescales of CO2 equilibration are the ultimate driver of CDR, but tracking the fate of the seawater from which CO2 has been taken up by seaweeds is very difficult as it is a ‘moving target’ that can be advected offshore, moved into heterotrophic systems (e.g. an oyster bed), or subducted.

4) A proportion of seaweed carbon is likely stored in sediments on geological timescales but this storage potential has not been accurately quantified. 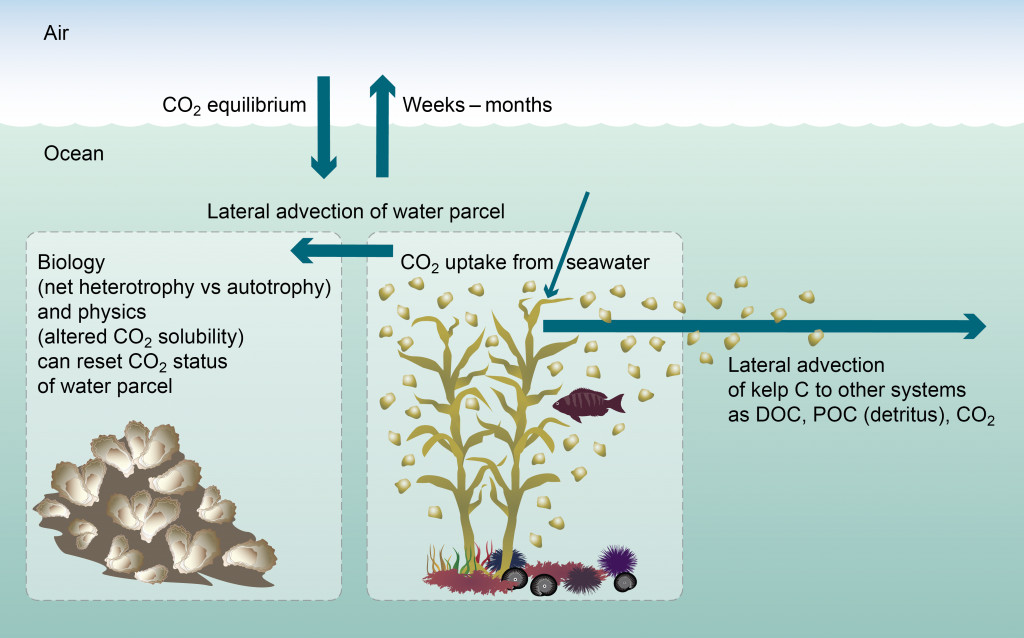 Figure 1: Key physical and biological processes that require quantification in Forensic Carbon Accounting for seaweeds. Although the rate of CO2 uptake by seaweeds is well known, the lateral advection of seaweed carbon to other systems, including the deep ocean and sediments, as dissolved and particulate organic carbon (DOC, POC) and respired CO2 are at present poorly quantified. It is also important to account for time scales of air-ocean CO2 equilibrium, and the fate of the seawater parcel which bears the signature of CO2 uptake.

Forensic Carbon Accounting (FCA) is a new tool for assessing the role of coastal habitats in carbon dioxide removal (CDR). FCA is essential to rigorously assess the potential of these systems in carbon credit and offset frameworks that takes into account the complexities of tracking the dual fates of seaweed carbon and the seawater that carries the associated CO2 deficit that results from seaweed photosynthesis (Figure 1). FCA can be applied to all coastal systems, and should be undertaken in any system (natural or aquaculture, onshore or offshore) prior to claiming carbon credits or offsets.