WBC Series: Western boundary currents as conduits for the ejection of anthropogenic carbon from the thermocline

A long-standing question regarding the ocean carbon cycle is whether western boundary currents (WBCs) and their extension regions provide an important pathway for anthropogenic carbon (Cant) uptake, thereby contributing to the known importance of these regions in the climate system. Successive versions of the Lamont Doherty Earth Observatory air-sea carbon dioxide (CO2) flux climatologies (Takahashi et al. 2002, 2009) indicate that, at the very least, there is a broad correspondence between the maxima in CO2 fluxes (uptake) and surface heat fluxes (release of heat to the atmosphere over the western subtropical gyres and WBCs). Motivated to understand the mechanistic controls on the ocean carbon cycle in these regions, a number of modeling and observationally based studies have drawn on multiple platforms to constrain fluxes both at the surface and in the interior of this region (Fassbender et al. 2017, and references therein; Nakano et al. 2011).

In particular, Nakano et al. (2015) and Iudicone et al. (2016) have emphasized the value of invoking a density-based framework for understanding the relationship between heat and carbon fluxes in WBCs and their extension regions building on the earlier studies of Iudicone et al. (2008, 2011). Within this framework, WBCs are best understood in the context of the shallow subtropical cell overturning structures (McCreary and Lu 1994; Lu and McCreary 1995) that connect the equatorial upwelling regions with their poleward subtropical water mass formation regions. The role of the subtropical cells in the climate system is to export excess heat absorbed by the coupled system in the equatorial regions to the subtropics, where heat is released along WBCs to the atmosphere. The heat released in WBC regions results in the densification of surface waters and the filling of the subtropical mode water reservoirs. In summary, this overall heat exchange process manifests itself in the ocean as a poleward divergence of warm surface waters in the upper branch of the subtropical cells and a subsurface convergence of cooler thermocline waters. The modeling studies of Nakano et al. (2011, 2015) and Iudicone et al. (2016) argue that the upper branches of the subtropical cells that feed WBCs accumulate Cant over broad scales and that this accumulation is a first-order process in setting the Cant inventory of the subtropical and subpolar mode waters reservoirs. In particular, Nakano et al. (2011) demonstrated that the earlier study of Rodgers et al. (2008), which had argued instead for convection in mode water formation regions to determine Cant uptake, was not supported by the large-scale Lagrangian diagnostics. Although Iudicone et al. (2016) was able to identify an integrated net transfer of Cant to higher density class waters associated with WBCs, given their global focus, they did not consider the specific pathways over which such transfers can occur.

Before proceeding to a mechanistic evaluation of the pathways and mechanisms regulating the transmission of Cant to higher density water masses in WBCs in a global model, it is instructive to first consider a simple budget of Cant over the Southern Hemisphere given by a global ocean carbon cycle model. The model considered is a global non-eddying (nominally 1°) configuration of the Geophysical Fluid Dynamics Laboratory’s (GFDL’s) MOM5-BLING model (Griffies 2012; Galbraith et al. 2011), forced at the surface with CORE-II normal-year forcing (Large and Yeager 2009). The model was spun up for 1000 years, and from 1860-1995 two runs were performed with identical climatological circulation states. For one of the runs, the surface boundary condition for CO2 gas exchange followed observational reconstructions, and for the second run, pre-industrial CO2 was maintained in the atmosphere. Following the definition of Cant of Zhai et al. (2017), who used the same modeling configuration, Cant in the model is the difference between the carbon variables for these two runs. Given our focus on waters for which s0  ≤  27.1, we use potential density for our analysis, following the method presented by Iudicone et al. (2016). 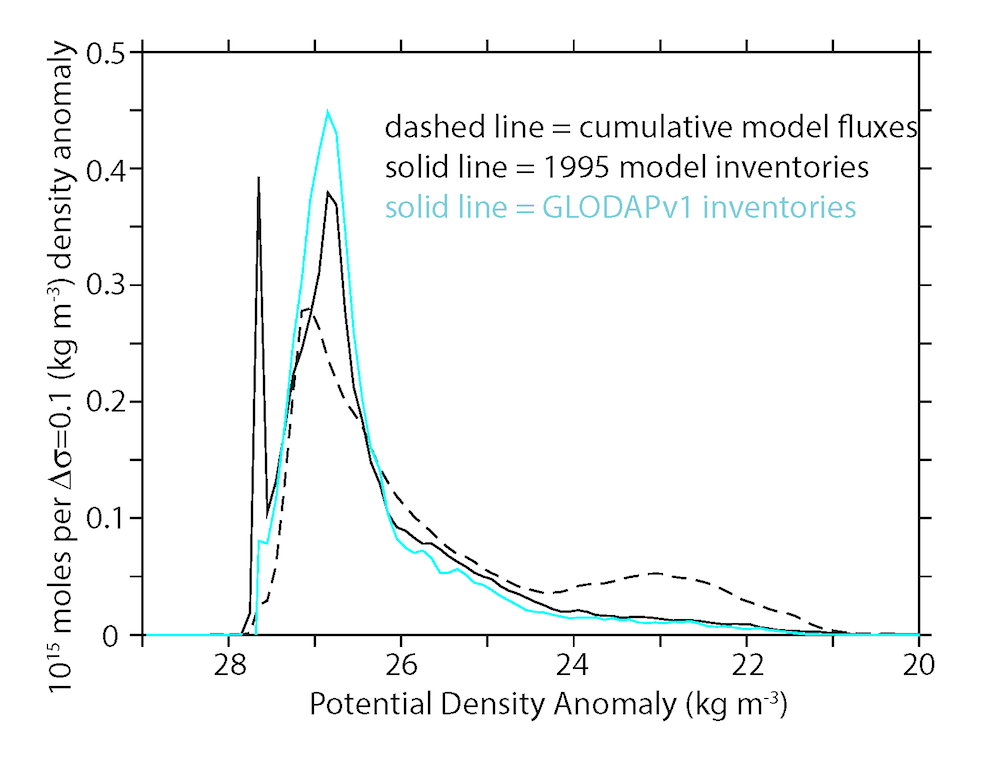 Figure 1 shows the observationally derived density-binned Cant inventory from the GLODAPv1 product (Sabine et al., 2004) with the density-binned Cant inventories in 1995 and the cumulative air-sea Cant fluxes over 1860-1995 simulated by the model. The cumulative fluxes were density-binned by month and then summed separately for each individual density class over the full period, 1860-1995. The base of the directly ventilated thermocline in the model at 30°S, calculated following the method of Sallée et al. (2013), has been identified to be at s0 = 26.4 in our model configuration. Comparing the density-binned inventories of Cant from GLODAPv1 (Sabine et al. 2004) with the model state in 1995 reveals that the model captures the first-order structure of the total Cant inventories over mode and intermediate waters. This diagnostic view reveals that Cant uptake by gas exchange tends to quantitatively explain storage patterns in waters lighter than the base of the thermocline, as these lighter waters are less likely to be transferred into the interior via subduction. In contrast, in the ocean interior for waters denser than the base of the thermocline, storage tends to exceed uptake (see Iudicone et al. 2016, for a discussion and analytical approximation of these distributions). This is consistent with the idea that WBCs and their extension regions may be serving as “gateways” for the net transfer of Cant from thermocline to sub-thermocline waters. 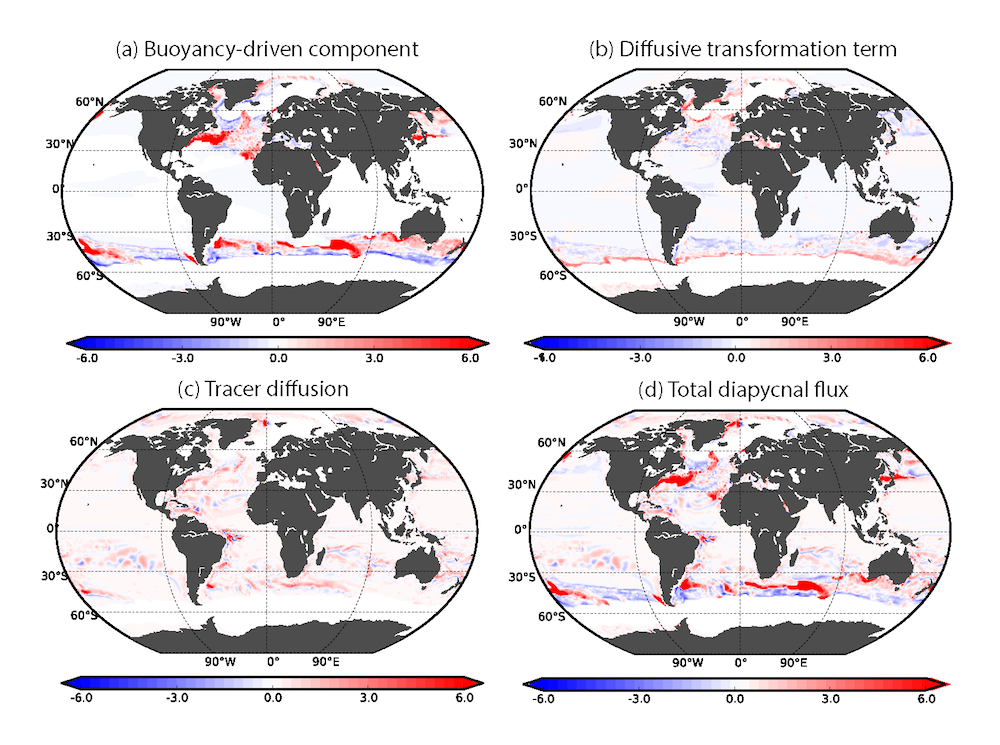 Figure 2. Maps of fluxes of Cant across the σ0=26.4 horizon for the year 1995, derived using the water mass transformation diagnostics presented in Equations 1 and 2 of Zhai et al. (2017): (a) the buoyancy-driven component, (b) the diffusive transformation term, (c) the contribution from tracer diffusion, and (d) the total diapycnal fluxes. The units are gC m-2 yr-1 and positive values indicate a net transfer from lighter to denser water masses.

In order to identify the specific mechanisms whereby WBCs and their extension regions sustain exchanges between thermocline water masses and subpolar water masses across the base of the thermocline, we consider, for the year 1995, a decomposition into the three dominant drivers in Figure 2. We begin with the contribution from buoyancy exchange with the atmosphere (Figure 2a). The sign convention is such that net buoyancy loss to the atmosphere, resulting in densification of water parcels that contain Cant, results in a positive flux. Thus over the WBCs and their extension regions, the diagnostic reveals a structural and significant annual mean flux of Cant across s0 = 26.4 from subtropical to subpolar water masses (positive), with a smaller flux in the opposing sense from subpolar to subtropical water masses (negative). The diffusive transformation contribution (Figure 2b) reveals a smaller net flux of Cant from subpolar water masses into the thermocline across s0 = 26.4. Thus, this term opposes in its sign the buoyancy-driven component over the WBC and extension regions. A smaller amplitude flux derives from the tracer diffusion contribution (Figure 2c). The total diapycnal flux is shown in Figure 2d, which includes additional terms such as cabbeling – i.e. when two separate water parcels mix to form a third that sinks. Taken together, the results emphasize an interplay of mechanistic drivers over the WBC regions that sustain diapycnal fluxes across the thermocline base and the central importance of heat loss to the atmosphere among the drivers of diapycnal exchanges.

Figure 3. Overturning schematics for the Southern Ocean (three-dimensional domain Y<30°S) for (a) mass fluxes, and (b) for Cant fluxes over the year 1995 in the MOM5-BLING simulation. The coarse graining into thermocline water (TW), subantarctic mode water (SAMW), and Antarctic intermediate water (AAIW) has been accomplished using the algorithmic approach of Sallée et al. (2013). The net freshwater forcing (precipitation minus evaporation, or pme) is shown at the sea surface for the mass fluxes. The mass units are Sverdrups (109 kg s-1) and for Cant are PgC yr-1.

The net cycling of Cant through the ocean’s overturning structures in 1995 can be better appreciated by considering the net transfers between three coarse-grained layers over the Southern Hemisphere:  subtropical thermocline waters (TW) (s0 < 26.4), subantarctic mode water (SAMW), (26.4 < s0 < 27.1), and a deeper layer that will be referred to as Antarctic intermediate water (AAIW) (27.1<s0). Although the deeper layer also aggregates water masses denser than AAIW, our interest is in quantifying fluxes across the SAMW/AAIW interface. For mass (Figure 3a), it can be seen that the principal formation source of SAMW is from AAIW (70%), with only 30% emanating from TW. This stands in stark contrast to the formation sources for Cant in SAMW (Figure 3b), where the TW formation source dominates over the AAIW source within the overturning circulation. In fact, the net of TW-to-SAMW formation sources is of nearly the same amplitude as the net gas exchange uptake of Cant by the SAMW layer over 1995, suggesting highly efficient transfer of Cant to the ocean interior. We wish to emphasize the strong degree of amplification in the TW formation source of Cant relative to mass for SAMW. While the Revelle factor (Revelle and Suess 1957) is expected to contribute to this amplification, a detailed attribution study of the discrepancies between mass and Cant is yet to be realized.

The model results presented here underscore an important role for WBCs and their extension regions in the ejection of Cant from the thermocline into denser waters. Building on the density framework for understanding Cant pathways first developed and presented by Iudicone et al. (2011; 2016), our analyses reveal important net diapycnal transfers of Cant to the ocean interior, consistent with the uptake pathways emphasized in Nakano et al. (2011). Furthermore, these analyses substantiate direct attribution of heat fluxes in WBCs and their extension regions as first-order contributors of Cant storage in sub-thermocline waters associated with the shallow subtropical cell overturning structures.

Ejection of Cant from the thermocline in WBCs and their extension regions has implications for the climate system for two reasons. First, the Revelle factor of low-latitude and thermocline waters is known to be less than that of circumpolar waters (Sabine et al. 2004), meaning that despite higher temperatures, low-latitude waters have an enhanced capacity to absorb Cant from the atmosphere than high-latitude waters. Thus filling a large subpolar reservoir such as SAMW with a subtropical formation source may lead to more efficient storage with respect to a circumpolar formation source. Second, denser subpolar interior water masses are expected to have longer interior renewal or re-emergence timescales for their Cant than subtropical waters (Toyama et al. 2017), and the longer the delay before re-emergence, the weaker the Revelle factor impact will be on regulating future Cant uptake by the ocean. Given the potential significance of the Revelle factor in regulating carbon-climate feedbacks, it will be important to determine whether this entry pathway for Cant might change under future perturbations to the physical state of the ocean.

Viewed in light of the study of Toyama et al. (2017), the net transfer of Cant from thermocline to subpolar water masses across s0=26.4 should be associated with re-emergence of Cant from the thermocline into the ocean’s mixed layer over the Southern Ocean (Toyama et al. 2017). We think it is important to combine the Lagrangian diagnostics for re-emergence applied in that study and the water mass transformation diagnostics applied here within a consistent modeling framework. It is also important to test the sensitivity of the formation sources for the important subtropical and subpolar mode water reservoirs to resolution for eddy-permitting or eddy-resolving model configurations. Of equal importance is the development of new observational constraints on the surface and near-surface formation sources of mode waters, through the development and application of quasi-conservative tracers of water mass transformations. One promising quasi-conservative tracer for this purpose is oceanic radiocarbon, which for the Southern Hemisphere has distinct subtropical and circumpolar surface ocean signatures.