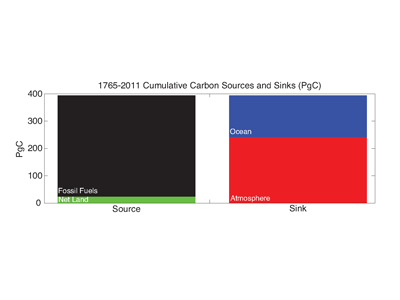 Since preindustrial times, the ocean has removed from the atmosphere 41% of the carbon emitted by human industrial activities (Figure 1). The globally integrated rate of ocean carbon uptake is increasing in response to rising atmospheric CO2 levels and is expected to continue this trend for the foreseeable future. However, the inherent uncertainties in ocean surface and interior data associated with ocean carbon uptake processes make it difficult to predict future changes in the ocean carbon sink. In a recent paper, McKinley et al. (2017), review the mechanisms of ocean carbon uptake and its spatiotemporal variability in recent decades. Looking forward, the potential for direct detection of change in the ocean carbon sink, as distinct from interannual variability, is assessed using a climate model large ensemble, a novel approach to studying climate processes with an earth systems model, the “large ensemble.” In a large ensemble, many runs of the same model are done so as to directly distinguish natural variability from long-term trends.

This analysis illustrates that variability in CO2 flux is large enough to prevent detection of anthropogenic trends in ocean carbon uptake on at least decadal to multi-decadal timescales, depending on location. Earliest detection of trends is most attainable in regions where trends are expected to be largest, such as the Southern Ocean and parts of the North Atlantic and North Pacific. Detection will require sustained observations over many decades, underscoring the importance of traditional ship-based approaches and integration of new autonomous observing platforms as part of a global ocean carbon observing system.